UPDATE 8:15pm:
Republican activists met tonight and collected over 100 signatures for an appeal to the slating effort that took place at the Virginia Beach Mass Meeting last month. They plan to officially file their appeal before midnight on Wednesday, April 9th, 2014.

“Everyone who took the time to sign up to be a delegate to the 2nd District Republican Convention should have the right to attend and cast their vote for their preferred candidate. The slating that took place by Senator Frank Wagner with the support of Cantor’s Young Guns took the power and voice away from the voters and consolidated it with the powerful few and their friends,” says James (Jim) Cohen.

Jim Cohen was one of 1,000 who attended the Virginia Beach Republican Mass Meeting last month where he witnessed a procedural move (slating) that disenfranchised almost 900 potential delegates, including himself. As has been previously reported, Senator Wagner and Cantor’s Young Guns used a procedural move to hand-pick 32 well-connected politicians and their friends to attend the upcoming 2nd District Republican Convention and vote for THEIR chosen candidate for the open 2nd District Chairman seat –  Frank Wagner. (The election is between Senator Frank Wagner and Curtis Colgate.) The other 900+ were denied their right to attend and vote for their preferred candidate. It has become the Battle Royale between the grassroots and the politicians with their high-paid consultants.

The appeal contends that the slating should be overturned because it failed “to seat 95% of the delegates, that the meeting was without due process, equal protection of the law, in contravention of the State Republican Party Plan and parliamentary procedure.” It further alleges that the action taken at the VA Beach Mass Meeting was in contravention to the U.S. Constitution, the 14th and 15th amendments and the Voting Rights Act.

Republicans have long fought to ensure integrity in the election process with voter ID laws, even though Democrats often falsely accuse Republicans of attempting to disenfranchise voters with these laws.  Ironically, Wagner and Cantor appear to have little regard for the integrity of the convention election process within their own party. They have shown contempt for hundreds of local citizen voters with their slating efforts to exclude all but the chosen few – a prime example of voter disenfranchisement.

The appeal will make its way to Gary Byler, the 2nd District GOP Chairman, and the 2nd district credentialing committee. If either side is unhappy with Byler’s ruling the case is then appealed to the Republican Party of Virginia.

Of course, all this needs to be quickly resolved prior to the 2nd District Republican Convention that is scheduled for April 26th in Hampton, VA. If the the ruling favors Curtis Colgate and the grassroots, then they have a heck of a job ahead of them.They will have little time to let 1000+ delegates know that they are allowed to attend and vote for their candidate at the 2nd District GOP Convention. However, if the ruling is denied, it will be extremely difficult for Colgate to win since VA Beach carries the bulk of the weighted votes (64%) needed to win.

Here is a snippet from the appeal. 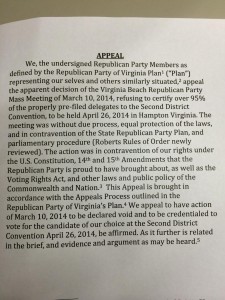 EARLIER TODAY: Curtis Colgate, a candidate running for the open 2nd District GOP Chairman seat against State Senator Frank Wagner, has just issued an email stating that an appeal has been filed to seat all the delegates that were slated off last month in Virginia Beach by Eric Cantor’s Young Guns and Senator Frank Wagner. You will recall that only 32 mainstream party members were selected out of almost 1,000 grassroots members who signed up to attend the 2nd District Republican Convention. The email said:

Delegates from around the district are outraged by my opponent’s attempt to take away everyone’s right’s to vote last month at the Virginia Beach mass meeting.  It is my understanding that an appeal to uphold everyone’s right to a meaningful vote has been filed with the 2nd District.  Therefore, to everyone who filed to be a delegate to the convention, you must consider yourself an active participant in the process and attend the convention on Saturday, April 26, 1 pm, at Hampton University.

I have checked with sources and apparently an appeal has not yet been filed, but is forthcoming. More to come shortly. Check back with us later today…

[…] who were “slated off” the Virginia Beach delegation to the 2nd District Convention. (More on that here). The allies of Sen. Frank Wagner (R-VA Beach) who engineered last month’s disenfranchisement […]

Reply
Virginia Republicans Need Shaun Kenney to Lead Amid Controversies April 16, 2014 at 12:40 am

[…] Jamie Radtke wrote about the appeal earlier this week, but there is considerable confusion about whether the proper process is being followed. I welcome you to read her post. It’s obvious that she sides with those appealing what happened in Virginia Beach, but as an unbiased observer, some of the information like the text of the appeal are particularly relevant. […]

I am so proud of the voters that have the courage to stand up for themselves and file an appeal petition. What is so disturbing is seeing so many legislators vote to disinfranchise the very taxpayers they represent. Now who are those legislators ? Senator Frank Wagner, Senator Jeff McWaters, Del. Chris Stolle, Del. Scott Taylor, Del. Bill DeSteph, Del. Barry Knight, Sheriff Ken Stolle, Commonwealth Attorney Colin Stolle. In fact it wasn’t even a secret ballot. The ballots were numbered by people’s names. So as they brought their staff and city employees in those folks pretty much had a gun to their head to vote the way they were instructed to. That’s the leadership we supported??? Not anymore. Just keep in mind that all votes don’t have to support or even vote for these legislators. Just do what Congressman Scott Rigell did to candidate EW Jackson. “I’m not going to support him”.

WOO HOO! The Spirit of ’76 is alive and well in Virginia Beach! GO Freedom Fighters, GO!