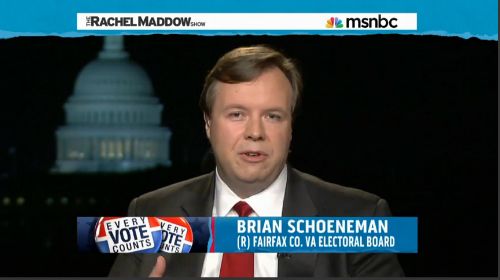 Brian Schoeneman, inventor of “Election Recount By Social Media”, is running in three way primary for Supervisor in the Sully District of Fairfax County. He has posted some fairly impressive fundraising numbers for a very local race.[read_more] He has raised $26,871.38 and has $12,585.47 on hand to spend before the firehouse primary the end of this month.  MasonConservative.com has the full breakdown here.  We will post the numbers for the other two campaigns when we receive them.

UPDATE: Taking a closer look at these numbers; the average amount donated was $46.53 mulitplied by 188 equals $8747.64, not $26, 871. It looks like a few people donated more than once and perhaps Brian loaned his campaign $15,000, or his union contributed that much or more.  We will know more specifics on April 15th and will report the details then.

I wonder why nobody else has reported their figures…?

Because no one does? Because they didn’t need to spin their numbers prior to the release on April 15th?

I wonder if his buddies down at the AFL-CIO plan on throwing something into the pot? Maybe his pal Richard Trumka can come down and headline a few rallies.

As the quintessential DC insider choice, this is not surprising. Brian is the kind of candidate that the business elements of both parties would love to leverage.

That’s so true. No doubt the establishment types are throwing some money his way.

I got the boot at BSDrift for basically calling him a Liberal Democrat, and some remark like diving into the pool where the money was deepest. ….ha, ha, ha.

Ah, looks like that clip is from who? Rachel Maddow? Is she a Dem or what? The Liberal “Dream Team”?

Is that the only pic you could find Jeanine? Or, Is there a message here?

Right, and the “grassroots” candidates are declining outside money and pan handling. Sounds to me like your pal Guevara has come up empty?

I have no idea. I’ve never asked him. Did you enjoy the debate last night?

Who is “a-head”? Let’s just talk about the real issues here for one moment please?

Is Brian combing his hair in a manor to deceive the voters in Sully?

You are not fooling anyone Schoeneman, the voters are smart enough to know a receding hair line when they see one.

I would not give up that union I day deal if I were you! Not yet buddy!

At least not until you get a hair transplant!