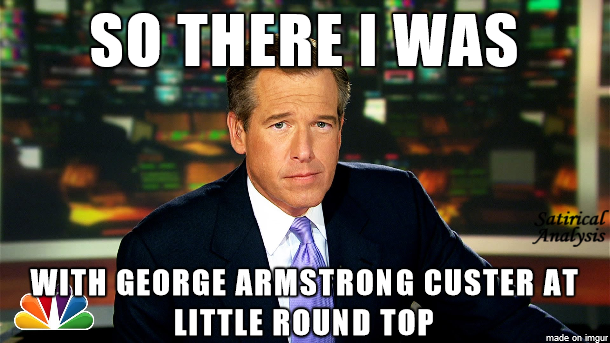 Brian Williams to Step Down “For a Few Days”

NBC news anchor Brian Williams has decided to step down from his role as anchor of the evening news after being caught telling a lie about being shot at while reporting the news from Iraq. [read_more]Williams now claims he ‘misremembered’ the incident. Other lies have also come to light this week.

“In the midst of a career spent covering and consuming news, it has become painfully apparent to me that I am presently too much a part of the news, due to my actions,” Williams said in a statement to NBC staff. “As managing editor of NBC Nightly News, I have decided to take myself off of my daily broadcast for the next several days.”

Lester Holt will take Williams’ place on the nightly news.

Brian Williams to Step Down “For a Few Days” was last modified: February 8th, 2015 by Jeanine Martin

I’ve heard a lot of “war” stories in my day most of them involving embellishments or outright falsehoods. I am in no way defending the pathetic lies of Mr. Williams but wondering why we and the media get so exercised over one pathological liar but spend day end and day out listening to our elected officials spew a continuous stream of lies at us and barely issue a protest let alone a mass challenge. Curious.

This could possibly have an impact on the Clinton 2016 Campaign. Hilary has done the exact same thing. In fact, it cost her plenty in 2008 when the story came up about her having lied about coming under mortar and sniper fire when she and her husband visited Bosnia back in the 1990s.

Not to mention her “Dead broke” lie – who was buying that?

Oh, for heaven’s sake, What Difference Does it Make?!