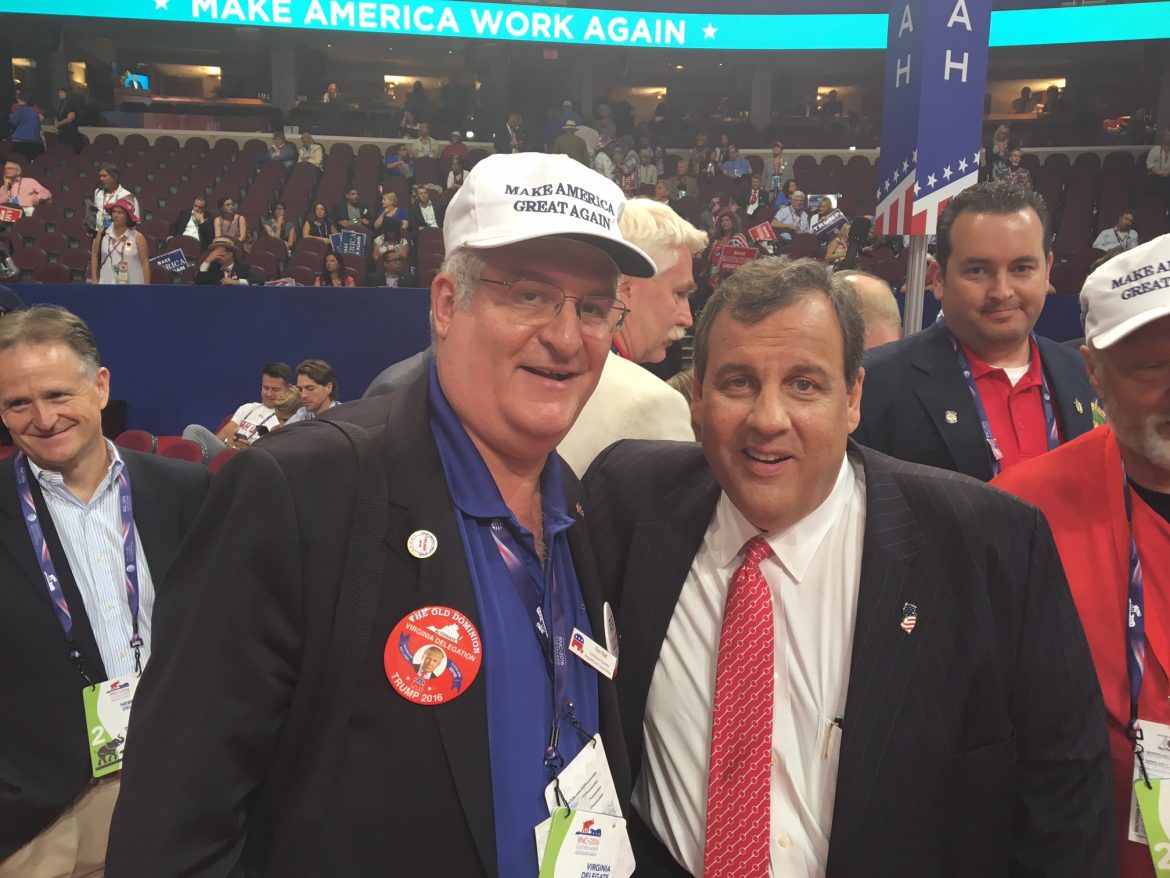 The author, Ken Reid, with then New Jersey Gov. Chris Christie on the floor of the Republican National Convention in Cleveland in July 2016

According to the â€œWall Street Journal,â€  the â€œdecision is the latest in a string of high court rulings that make it harder for prosecutors to pursue public officials who allegedly abuse the public trust and use their positions to engage in deceitful conduct.â€  The Journal referred to the high court overthrowing the  convictions of former Virginia Gov. Bob McDonnell in a scandal involving alleged bribes by a vitamin supplement manufacturer.

The â€œBridgegateâ€ scandal involved an alleged conspiracy by Christie appointees to shut down a lane of the George Washington Bridge in rush hour in 2013 â€“ ostensibly to do a traffic study â€“ but allegedly to retaliate against the Mayor of Ft. Lee, a Democrat, who pledged to endorse Christie for re-election to a 2nd term that year, but then reneged.  The high court ruled there was no crime committed by two of Christieâ€™s aides.

I grew up in Princeton, NJ, and graduated Rutgers with one of Christieâ€™s closest confidants.  Like a lot of Republicans,  I admired Christie and how he was able to win two terms as a Republican in a blue state plus his key role in helping Donald Trumpâ€™s election campaign.  Christie chaired Trumpâ€™s transition from May to November 2016 â€“ where I donâ€™t feel his talents were best suited.

However, I have long wondered if â€œBridgegateâ€ prevented Trump from nominating him for Attorney General â€“ a job he was very suited for given his stellar background as New Jersey U.S. Attorney, where he was a hard-nosed prosecutor who went after criminals regardless of their politics (unlike his successor, Paul Fishman, who pursued Bridgegate in an effort to thwart Christie from being a viable presidential nominee for the GOP.

In addition, there was hope Christie as Attorney General would pursue Hillary Clintonâ€™s email destruction.  Christie had no â€œRussiaâ€ conflicts and Clinton has still skated due to James Comey at the FBI doing the bidding of the Obama higher ups.   No prosecution of her on perjury before Congress in 2015.

However,  Bridgegate was still hanging over Christieâ€™s head, and so Trump nominated then Alabama Sen. Jeff Sessions for A.G., another staunch ally.

But because it was discovered during his nomination hearings that he had met with Russian diplomats â€“ as did other Senators â€“ Sessions agreed to recuse himself from handling the Russia probe, and the Clinton probe.

As a result, Sessions, once confirmed, named Robert Mueller, former FBI director under W. Bush, to be the special prosecutor.  Mueller hired a slew of anti-Trump investigators and this led to the impeachment investigation.

Had Christie been in charge, the entire situation would have been much different for Trump, Clinton and the country.

In addition, Sessionsâ€™ senate seat opened up for a special election, which Democrats won it due to the nomination of flawed candidate Roy Moore by the Republicans.  So, as a double whammy, the Senate lost not only a GOP seat but a strong Trump ally, Sessions.

Sessions was eventually forced out as attorney general and Christie again was not strongly considered  -not just because Bridgegate was still on the horizon but a potential scandal involving a local prosecutor in New Jersey whose office Christie had reportedly taken over for political reasons  Sessions is now running for his old Senate seat in Alabama.

In his new autobiography Let Me Finish, Christie implies he was relieved of handling the transition and not considered for other posts due to  Trump adviser and son in law Jared Kushner, whose father, Charles, was prosecuted by Christieâ€™s office on corruption charges.

I have not read the book but in my view, Kushner holding a grudge may only be part of the story.  After all, if Kushner held sway over Trump, why would Trump allow Christie to be a close adviser during the critical 2016 campaign and â€“ according to Christie â€“ consider him for other cabinet posts?

In late 2018, Christie told CNBC    he turned down seven jobs in the Trump administration stating : â€œHe hasnâ€™t offered me anything that I really wanted to do,â€ he said, noting Trump considered him for Labor and Homeland Security secretary.

But then, when Sessions resigned, Christie was again overlooked for replacing him and Trump picked William Barr.

Again, Bridgegate was still in the courts and I believe this very politically motivated prosecution by the

Obama administration was all about cutting down good people like Christie and McDonnell and destroying their chances for higher office.  Former National Security Adviser Michael Flynn, along with a number of Trump operatives involved in â€œRussiagateâ€ (â€œFlynngate,â€ I call it) are also among the casualties of what the Democrat â€œResistanceâ€ has wrought on our federal government.   Presidents should be given latitude on whom they wish to have in their cabinets and whom they appoint as judges.  Only if REAL corruption or malfeasance is found during the nomination process should a nominee be withdrawn or defeated.

But using the wheels of government to destroy reputations sets a bad precedent as Republicans can easily turn the same heat on Democratic nominees.