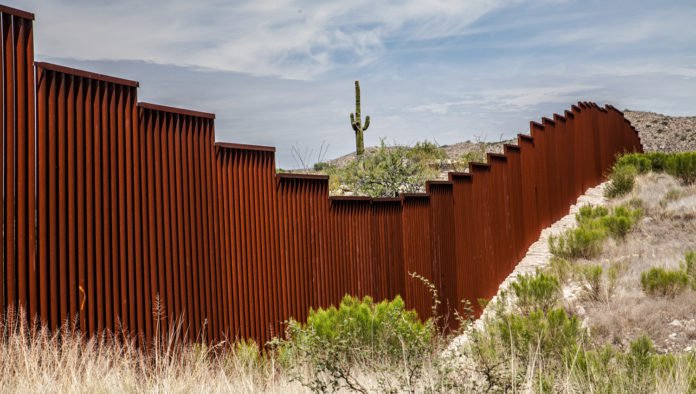 Two farmers in this American classic are mending a common wall that separates their two farms, and one farmer laments, “something there is that doesn’t love a wall.” The other farmer notes without argument that “good fences make good neighbors.”

This poem is ironic and contradictory, delving into the human condition of relationships – boundaries on the one hand and cordial hospitality on the other. But Frost’s second farmer has the last word, as he repeats the old proverb once more as the poem closes, “Good fences make good neighbors.”

Frost’s poem is just as relevant today as it was a hundred years ago, as the nation argues over significantly increasing border security on the southern border with Mexico and building walls and fences.

To most Americans it’s just common sense; walls and fences are one means to protect what we value most. We don’t leave our house doors open because we know that it is an invitation for thieves to walk in and take our property. Our politicians are guarded behind barriers, fences, and walls to protect themselves, from us presumably. Banks guard their money, our money, behind walls of steel. Many and varied enterprises and private property are secured behind doors, walls, fences and cameras.

History is littered with various walls, like the Biblical walls of Jerusalem, the Great Wall of China, and Hadrian’s Wall, among many that demonstrate that ancient societies were no less concerned with their safety than are modern ones.

In our own time there is the Vatican that is largely behind a massive wall, proving the Book of Ecclesiastes assertion that there is nothing new under the sun. Of course, there was the Berlin Wall, and Israel’s wall separating the West Bank, which is that nation’s largest infrastructure project.

It is a submission to the reality of human relationships.

If you travel in the border area of both the southern United States and northern Mexico you will be struck by the security walls, fences and barred doors and windows around private homes. You see, people who actually live in these areas, regardless of where they are from, their language, or their heritage want to be secure and safe in their person and property, too.

Interestingly, in Mexico you will find that private homes, where the occupants can afford to do so, and many businesses have extraordinary security and walls and fences, often with razor wire. Nor is it uncommon to see barred jewelry stores and banks, employing heavily armed security or federal police.

Such is the state of our world. It just is.

As a Texan who grew up in a border town, I can attest to the fact that where you have fencing you vastly reduce illegal activity including immigration. I can also report that on unfenced portions of the Rio Grande River, you can literally park your car and watch illegal aliens swim, wade or walk across the sandy bottomed river, depending on the time of the year.

Do walls and fences stop all illegal alien traffic? No, nothing is foolproof, nothing is perfect. But will it stop everyone except the most determined? Absolutely. That is why poll after poll shows that American’s want a wall and fencing along the border where it’s practical and needed. It’s because they want to protect what they value most.

What’s it going to be President Trump? Are you a bigger liar than Hillary? Or, is Mexico going to pay $10-12 BILLION for the wall as you promised us over and over?

What is funny is that you think Mexico is going to write a check. Trump is already taking it out of their bank account through tariffs and prevention of business relocations. By the way, the impact will be much larger than $10B and Mexico knows it.

What is really funny is that you think Mexico hasn’t slapped tariffs on US goods that probably exceed the tariffs we put Mexican goods. Stop trying to tell me there was another person on that grassy knoll in 63’.

it isn’t just Mexicans that are crossing. There is no question that mid-Eastern and far-Eastern groups are being smuggled into the USA. The FBI says that there are terrorist investigations going on in every state. An open border is simple the easiest route into the USA.