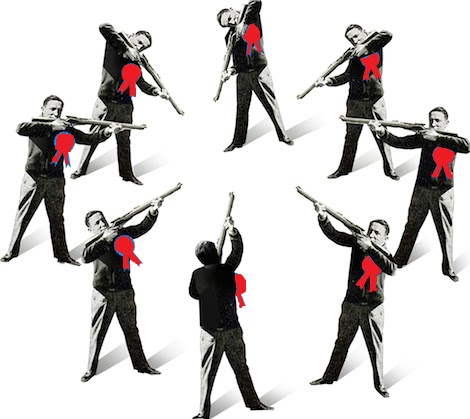 Burgos Situation Shows How Everyone Can Be Wrong

Recently, a formerly popular blog with a moderate, center-right “bearing” decided to start trumpeting an ill-conceived, inflammatory posting by Fredy Burgos, a member of State Central Committee from the 11th Congressional District. In the post Mr. Burgos declares that Christians have both a right, and a duty, to vote for Christian candidates over non-Christian candidates in elections.  The context for this comment came in relation to the upcoming contest for Fairfax County Republican Chairman between Tim Hannigan, who is Christian, and Mike Ginsberg, who is Jewish. This launched the ever predictable circular firing squad that is well known and all-too common in the Republican party these days.

The first step in this process was for this aging blog to take the comment out of context and claim it was anti-semitic. Instead of Mr. Burgos discussing an uninformed and incorrect idea about a Christian’s duty in the electoral process, the comment was morphed into a claim that Jews should not run for office. This distortion was made easier by the fact that Mr. Burgos is well known for making derogatory comments in the past about Muslims, Catholics, and Methodists, to name a few.

If the outrage over this comment were genuine that would be one thing, but it’s not. It is carefully crafted and purposefully timed outrage designed to affect the outcome of the Hannigan/Ginsberg race.  Mr. Burgos supports Tim Hannigan and has been an eager and outspoken campaign volunteer for him, while this other blog supports Mr. Ginsberg for the position. Because of this Mr. Burgos must be destroyed, and anyone who knows him must be made to publicly disavow any and all knowledge of him. In old Soviet Union terms, Mr. Burgos must be erased from history.

Cue the pitchforks from the digital mob.

The calls of condemnation come from all sides, with all the usual suspects saying all the right things in the familiar kabuki dance of contrition Republicans go through any time anyone remotely associated with the Republican Party says or does something stupid. The statements are not wrong in their sentiment, but we have been so conditioned to automatically apologize for everything someone else does or says, they feel like a form letter with only the name of the offender changing, and they seem to have lost any true meaning.

More importantly these cut-and-paste condemnations attempt to absolve others of the fact that somebody should have dealt with Mr. Burgos and his penchant for making stupid comments on the internet long ago.  I have told my oldest son repeatedly to be extremely careful what he posts on social media because when it is on the internet it lives forever and can come back to haunt you.  You would think after the third or fourth time Mr. Burgos made one of his inflammatory statements, SOMEBODY would have pulled him aside and “explained” to him that, as a member of RPV’s State Central Committee, he is under a microscope and should probably follow the advice of staying silent and being thought a fool, instead of opening his mouth and removing all doubt.

This leads to Mr. Hanigan issuing a statement publicly denouncing Mr. Burgos and declaring he no longer has any role in the campaign.  The statement should have ended right there.  Mr. Hanigan, however, not wanting to completely cut off someone who has been a loyal supporter, instead calls for an “investigation” into the issue.  Who is supposed to run this investigation, what it is supposed to investigate, or who it will report to are complete mysteries.  The only thing not in question is that his statement gives his opponents all the ammunition they need to continue to make Mr. Burgos and his comments the central issue in the Fairfax Chairman’s race (which was their goal all along).  The race will now boil down to ridiculous claims about how a vote for Hannigan is a vote for racism and anti-semitism.

This moderate blog, not content to stir the pot in just one race, decides this is the moment to settle other scores. They begin to attack RPV Chairman, John Whitbeck, for not immediately removing Mr. Burgos from State Central Committee. The fact that Mr. Whitbeck does not have this power is irrelevant. They are not content to allow the rules to be properly followed. Their virtue-signalling, worthy of any Black Lives Matter rally, demands immediate action, no matter what that action might be.

To make matters even worse this blog is writing all of these postings anonymously so nobody can be personally blamed if their attacks should somehow backfire. You would think that bloggers who are so full of righteous indignation, and have displayed a pattern in the past of “outing” anonymous bloggers they don’t like, would have the courage to sign their names to their calls for politically motivated social justice.

What all of this leads to is a black eye for the Republican Party, and a celebration among Democrats and the liberal media for gift-wrapping them another issue to use to beat up Northern Virginia Republicans at a time when we are in danger of losing the U.S. House and Senate. This situation should never have happened, and shows how all sides of an issue can be wrong.

The blog that started this, which seems to have no problem calling others racist when it comes to the issue of immigration, was wrong to take Mr. Burgos’ comment out of context and use it in a politically motivated way to score points and help their preferred candidate win.  They and their allies have been grandstanding off of one man’s comments for months now to the detriment of the Republican Party.

Finally, Mr. Burgos was wrong for writing what he did. He would not be the first person in the world to claim a higher than average understanding of Christianity while completely failing to live the kind of life Christ asks of us.  Furthermore, when someone has a history of writing comments that are derogatory of others, at a certain point you move past the, “I just wrote something stupid,” excuse. Once is a mistake. Twice is a pattern. More than that and it is an indicator of their personal character.

Mr. Burgos should not wait to be removed from State Central Committee.  He should take personal responsibility for his own mistakes and resign, and then take some time to read the Gospels and the letters of Paul, and learn about the real duties of a Christian.

The attempts to smear other Republicans with the “guilt by association” paint brush needs to end. No one is responsible for Mr. Burgos’ comments except Mr. Burgos himself. Nobody forced him to say it. Certainly nobody asked him to say it. To use these comments in a politically motivated attempt to settle scores or win an intra-party contest says more about the character of those launching the attack than it does of those they are trying to smear.

As for the other blog, I remember another Northern Virginia blog that made an enormously overblown issue about a Halloween graphic used by the Loudoun County Republican Committee in 2011.  In an attempt to regain their lost relevance, this blog elevated a cartoonish image into a national emergency when we were trying to win back control of the VA Senate, prompting calls for condemnation and demands for resignations, and nearly cost us Senate seats in Northern Virginia.  That controversy turned out to be the last gasp of the blog formerly known as “Too Conservative.”

One wonders if the same fate is in store for this other blog fomenting new outrages.