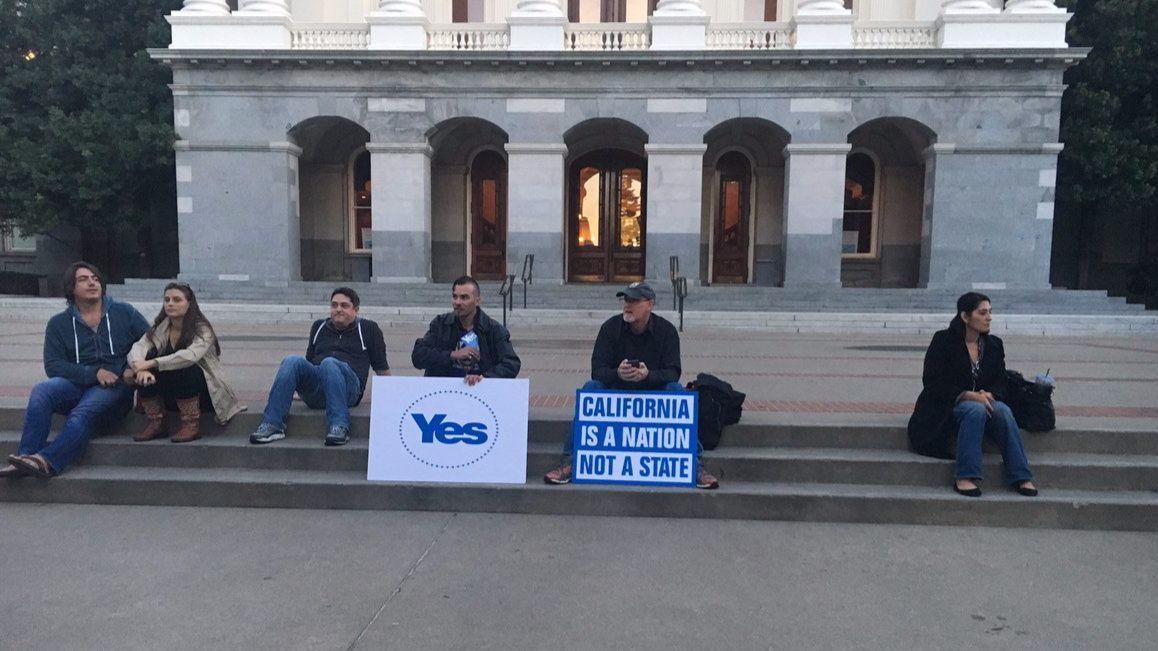 California is so Out of Step with the US, It Should Secede

Since the election numerous articles, including one of ours, have been written about California seceding from the nation. They should secede because they are so out of step with the rest of the country and under President Trump it’s only going to get worse.

Due to California’s very liberal policies, their wall of debt has risen to an astonishing $443 Billion but the ‘official’ debt is only $26 Billion.

Of course that wall of debt continues to grow with all the welfare California pays to illegals, sanctuary cities, the homeless, and those who don’t feel like working.  Who’s going to pay this massive debt?  You probably see him in the mirror every morning.  We’re all going to have pay to bail California out while they continue to pile up the debt with no end in sight.

This past election California continued to take itself out of mainstream America when they voted to tightened gun laws again, make marijuana legal, further increase in taxes on the rich, more cigarette taxes and authorized more money for multilingual education. (Whatever happened to the notion of the melting pot where we all learn English?) California gave Hillary the 2 million votes she needed to make her the leader in the popular vote. (For that alone we should encourage their secession.)

The state will rack up more debt when President Trump cuts federal funding as long as they continue to have sanctuary cities and refuse to turn criminal aliens over to ICE.  President Trump will build a wall to stop illegals prompting California Governor Jerry Brown to say

“If Trump were ever elected, we’d have to build a wall around California to defend ourselves from the rest of this country,”

Obama’s Dreamer program which allows children of illegals, brought here by their parents, to stay in the country. There are 742,000 Dreamers, with one-third of them living in California.  That program could end under Trump.

California wants more gun control and just voted for more.  Trump was endorsed by the NRA earlier than any other President.  They really like him and the feeling is returned. More gun control is just another thing that makes California out of step with the rest of the country.

Californians LOVE climate change legislation. They have some of the strictest laws in the country for reducing green house gases.  The state has gone so far as to tax cow flatulence, driving more farming business to other states. From Zero Hedge:

In yet another attack on California businesses, yesterday Governor Jerry Brown signed into law a bill (SB 1383) that requires the state to cut methane emissions from dairy cows and other animals by 40% by 2030.  The bill is yet another massive blow to the agricultural industry in the state of California that has already suffered from the Governor’s passage of a $15 minimum wage and a recent bill that makes California literally the only state in the entire country to provide overtime pay to seasonal agricultural workers after working 40 hours per week or 8 hours per day (see “California Just Passed A $1.7 Billion Tax On The Whole Country That No One Noticed“).

Do California officials believe there is a bottomless pit of money somewhere?  In Washington? Under President Trump that notion will be disabused.

Yes, California has gone off the deep end, completely out of step with the rest of the country.  I see little downside to their succession from the US. Let them go and get their huge debt off our backs.

California is so Out of Step with the US, It Should Secede was last modified: December 5th, 2016 by Jeanine Martin

Next up, Michigan elects a Republican Governor and state coffer start to run dry

But, the republicans that voted for these financial geniuses, are not only taking themselves down, they’re
taking everyone down with them, Republicans, Democrats and Independents.

These are 5 of the most conservative governors in the country.

where the economy is hot right now.

I hope this happens. I read somewhere that across the nation, Wealthy Blue States get less than a $1.00 back for every $1.00 in taxes they pay. Meanwhile, in several of the states that voted HARD for Trump, for every $1.00 in taxes paid, they sometimes get a much as $2.00 in return! Source: https://wallethub.com/edu/states-most-least-dependent-on-the-federal-government/2700/

Over-Simplification: If California Secedes, and somehow stops paying Federal Taxes, they’ll suddenly be in a position to tax in a way where residents can get $1.00 back for every $1.00 paid, instead of less.

Bottom line:
In California, your Federal Tax money counts for less (if you live there)

Your Vote counts less (thanks to the electoral college)

California is also one of the most least reliant states, financially, on the federal government. (#46!!)

Dealing with Federal Lands may be a bit more ugly. But the math checks out. I say, let’s do it.

It is basically “Mexifornia” at this point. Go your separate way, and leave us real Americans in peace. Although I’ve had some friends from Kali, the state as a whole can leave and the rest of the nation would be a better place. Don’t let the door hit you on the way out.

Sorry you feel that way. Here’s some inside baseball: State by State, California is one of the least federally dependent, ranking 46. Mississippi ranks #1. Even if seceding is a longshot, financially California tax payers actually subsidize other states when it comes to federal moola. So, in a perfect world, seceding means that for every $1.00 of federal taxes paid before, California could now get at least that much back in benefiting itself.

I understand the sentiment, but I think that the reality looks a little bit different.

California can secede, minus the counties that voted Republican and all the Federally owned lands. That would leave parts of San Francisco and a little bit of LA to become a nation, surrounded by Trump’s newest wall

Yeah, the Federally owned lands part is interesting. How much Federal Land is in Texas? That state is #2 in size, and has been playing the secession game for years as well.

About 2 percent of Texas is Federal land.

45 percent of California is Federal land.

Many thought the country was lost when Obama was elected, yet now we have Trump to “Make America Great Again”. Don’t write off California yet, miracles do happen.

California is lost. It is now heavily Hispanic and as polls indicate, Hispanics want big government. The Midwest came back because unlike California, its major portions have yet to deteriorate into a third world shit hole. It is that simple. Demographics is destiny. I know that stance is hard for the BD snowflakes to accept, but we should.

I hope you are right. I think many people are praying for a miracle.

…or we could just try federalism (again).

I new Sherman’s march through Silicon Valley will solve this.

That’s terrible. Now you’ve got me rooting for a guy I grew up believing was the Devil.

One of the issues settled by the Civil War is that states cannot leave the Union.

If you argue with your wife and think it’s “settled” because she stops arguing with you then, yeah, I guess the issue is “settled”.

I think the difference here, is that many people who are worried about a Trump Administration really believe that even people who think they are getting what they wanted, and won, will be totally subverted.

If California leaves, that’s one less scapegoat, I suppose. But, many are really worried that things are going to get worse for people as a whole, especially states that are more federally dependent.

Just as in many of these states, people’s votes count for more. They also get more federal dollars per dollars paid out. Many of the top ten get about $2.00 back for every $1.00 paid in taxes. Where places like, the Socialist Republic of Drugafornia get less back. In otherwords, we subsidize other states on a federal level.

Even if everything everyone here believes were a 100% true, the numbers don’t seem to work that way.

So people can say “fuck you” to something?

With California turning to the rest of us to bail them out of their HUGE debt, I fail to see how they are subsidizing us.

Okay. I’ll look for some articles that expand on that. If you can provide me with some more evidence that this is happening other than this article or cut-and-pasted of this article that would be great.

I’ll look around and post again if I find anything. If you would be willing to do the same I’d be very greatful.