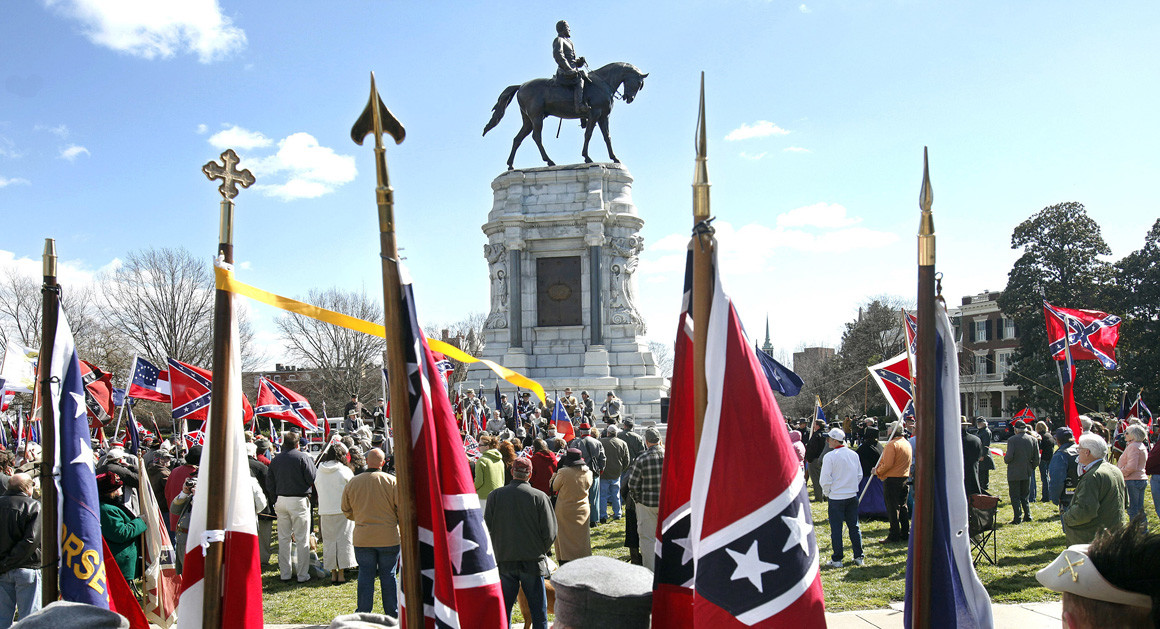 Recently – people on the radical left, in their never ending war on American culture and our historical relevance, have resorted to calling Confederate soldiers “terrorists” and anarchists to justify the removal of Confederate monuments. This is beyond insulting, it is also dangerous.

Before we go any further, as many of you can tell by my name, I am not a 100% White Anglo Saxon Protestant. To the contrary, I am ½ Afghan, and most of the other ½ is Scots Irish. There aren’t too many ½ Afghan ½ Scots Irishmen in the Valley. Growing up in Northern Virginia (Arlington/McLean), I experienced and saw racism in a way which no person should ever have to experience or witness. Also for the record, my ancestors fought for the North (24th Iowa and 32nd Ohio). One of them, Pfc Cameron, 32nd Ohio A Company, was killed at the Siege of Harpers Ferry September 1862.

While everyone can and likely does agree that slavery was a horrible evil, the fact remains that it was the concept of ‘states rights’ and the Morrill Tariff, which caused the Civil War. And at the time, there was no legal precedent as to whether secession was legal or illegal. It wasn’t until after the Civil War that the US Supreme Court decided that secession was illegal under the constitution. The 1869 decision of Texas vs. White determined once and for all that secession was illegal.

The men who fought for the Confederacy were for the most part, not slave owners, but were small farmers or laborers who viewed their individual state as their own country. And saw the USA as a loose group of individual countries united under a single flag and ruling body, but with the right to exit if they chose. Slavery was a “hot button issue” but the real issue was whether or not the federal government could interfere in what a member state could do. An argument we are still having to this day when it comes to abortion, marriage, gun ownership rights, and so many other issues.

The Morrill Tariff of 1860 was opposed by pretty much all the Southern states, as they knew protectionism would harm their economy. The Northern Republicans and Northern Democrats supported the tariff because it would help their industry, and would force the plantation owners to have to sell directly to them, and less to Europe. The British were fighting mad over the tariff, and that was why the British were sympathetic to the Confederate cause. And the Morrill Tariff was the main reason the Democratic party split in 1860, with the Northern Democrats nominating Stephen Douglas and Southern Democrats nominating John Breckinridge. All but giving the election of 1860 to Abraham Lincoln.

The Confederate soldiers, who the radical left calls traitors and terrorists, were our fathers, our uncles, our cousins. One of them, probably an artilleryman, shot and killed my great great great grandfather at Maryland Heights Harpers Ferry. I am sorry that my ancestor was killed. The letters among my ancestors about his death are quite touching. But the soldier who killed my ancestor was not a terrorist, he was a man, probably just as scared as my ancestor, who was trying to protect his homeland from what they would have seen as a foreign invasion force. Trying to kill another soldier before that soldier killed him first. Something soldiers are supposed to do. I cannot over emphasize enough the idea that up to 1865, very few thought of themselves as Americans. They thought of themselves as New Yorkers, Virginians, North/South Carolinians, etc. And while yes the Civil Was fought primarily to save the Union, the fact is that Union regiments were raised by the individual states. And no Northern Governor would have allowed Ohio soldiers to be mixed in with New Hampshire soldiers to form a regiment. Each Governor was proud to have commissioned each regiment. Same with the Confederacy.

In the name of Political Correctness, these people on the “tolerant left” will never stop. Activists are already trying to remove the name of Thomas Jefferson from the University he founded, The University of Virginia. Activists are trying to remove Robert E. Lee’s name from the school he saved after the Civil War, Washington Lee University. They also tried and failed last year to remove the name Woodrow Wilson from Princeton University, a school he was once President of – due to his racism. Now for reasons too long to list on here, I believe Woodrow Wilson was one of the worst Presidents in US History. But having once been President of Princeton, Woodrow Wilson’s name belongs at Princeton. We can debate Wilson’s racist legacy, the creation of the Federal Reserve, multiple foreign policy mistakes, and the Depression he caused in the end of his Presidency, but don’t remove the good he did while head of Princeton because he was an avowed racist as President. Same goes with J. Edgar Hoover and the FBI. We can all be horrified by his targeting Martin Luther King, but at the same time we must acknowledge that without Hoover, there would be no FBI. The list goes on and on.

Many of the people who support the removal of the Confederate monuments in the name of tolerance are the same people who support Sharia in the name of tolerance, or who state that anyone who uses the hashtag #alllivesmatter is inherently racist. So this is not about racism, it’s about making themselves feel good or look good to their narrow minded elitist buddies at cocktail parties. Does racism still exist? Of course it does. And we should fight racism – but we should not and must not sanitize our history.

Condoleezza Rice stated earlier this month that “sanitizing your history to make you feel better, it’s a bad thing”. Given that Ms. Rice’s ancestors were slaves, and that she marched with patriots to be sure she and her race had equal rights as Americans, we should take her words very seriously. And for those whose ancestors fought for the Confederacy, I salute you in honoring your patriot ancestor. I hope that you will honor my ancestors in the same way. I support you 100% in flying the Stars and Bars. And to you who think that the Confederate soldiers were terrorists, please go to University of California, Berkeley, and tell the radicals trying to leave the USA that they are terrorists, and see what they do to you.