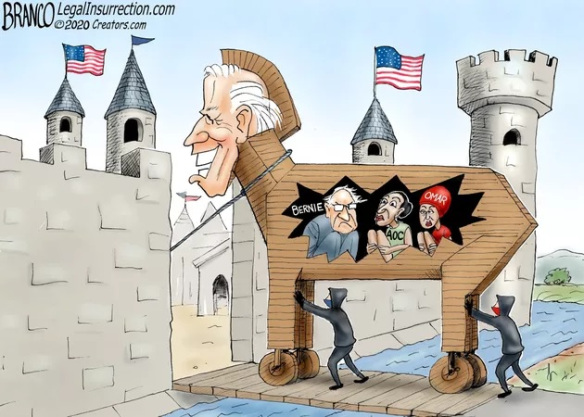 Campaign 2020: Voters will choose between freedom or tyranny, performance vs. personality

Biden is the Trojan horse for the radicals

President Trump, Vice President Mike Pence  and other speakers laid it on the line at the National convention with the message — “Joe Biden is a Trojan horse for the radical Left.”

Americans who have fallen prey to the Leftist messaging about Trump’s personality, style, tweets and autocratic style, should take note.

Biden cannot win or govern without the radical Left Democrat Socialists who have overtaken his party.  The Sandersistas have defeated establishment Democrats across the nation in House primaries and many local races, and they are here to stay.

They want power and they want it bad.  Biden is their Trojan horse to access the 4,000 presidential appointments in the Executive Branch, and judgeships.  If their Utopian budget-busting, economy-destroying initiatives like Medicare for All, Free College Tuition and Green New Deal do not pass Congress, they still gain control of the federal bureaucracy to carry out their destructive anti-American, anti-capitalist agenda.

That agenda is to either defund or defang the police;  cut military spending, and hence lots of jobs; weaken our war on terrorism, and hurt Israeli sovereignty, and expand government in our lives vs. private initiative.

And it’s a continuation of censorship of conservative and religious views, perhaps an end to tax exemptions for churches and synagogues.

With Trump, due to his top-down approach to the bureaucracy, we’ve had very few “rogue” cabinet members and political appointees with personal and political agendas.  A number of them have been booted.

I recall in the Bush administration there were ideologues placed in the Department of Transportation that sought to advance the idea of privatized toll roads as a no-tax solution to adding road capacity.  It has not worked.

In the FDA, which I have covered as an editor since the late 1980s, a number of commissioners and political appointees gave us federal regulation of tobacco designed to reduce teenage smoking, or “Nutrition Facts” labeling that are on our food products, designed in part for healthier eating.

We still have smoking, lung disease and the obesity problem is worse than ever.

And, a Biden administration run by radicals and agitators will disrupt society more than Trump has.  All Trump has done is disrupt the Left and the Washington Swamp.

After the president’s acceptance speech, CNN talking heads were visibly worried about how Republicans successfully drew the battle lines and hit the reset button on the campaign, which polls say is a huge loss for the GOP.  Chris (Fredo the Clown) Cuomo said voters are being asked to stick with who you know or take a gamble on Biden.  He’s right.

The remote Republican National Convention focused purely about issues, not Joe Biden’s age or senility. Most speakers were average Americans who have BENEFITED from the Trump Agenda.  It was all about hope and a brighter future and reminding viewers that despite COVID 19 and the economic decline (which is really mostly due to the governors), we shall rise again!

In contrast, the message out of the Democrat convention was not about issues and the future.   It’s not about “Vote for us and we will do xxxx.”  Instead it was all anti Trump.  In essence, “Become one of us enlightened liberals and let’s get rid of the bogey man in the White House. Trust us, not him.”

Do voters care more about performance or personality? That is the essential question this year.

For us Republican activists trying to sway voters, the Trojan Horse message must be pounded over and over again.  Voters must understand when you vote for a president, you are also voting for who controls the bureaucracy and in this day and age when Congress is so dysfunctional and not able to pass legislation, the all powerful Executive order and White House/OMB control over regulations is how government acts (unfortunately).

Do you stick with the devil you know or the devil you don’t know?  Do you risk your 401k declining, loss of more jobs due to more regulations, and potentially higher taxes?  DO you rally think Democrats can deliver on free stuff?

Or do we trust ourselves and our economy and entrepreneurs.  Do we trust the bureaucrats, “experts” and meritocracy, or what really made America great – the free market for goods, services, ideas, religion and the arts?

In other words, do we remain a free capitalist society with a modicum of safety net programs or do we transition to becoming a European Dem socialist country;  just another nation among the nations?

There are only 60 days left to what could be the most pivotal election in this century.  Let’s get to work to reelect the present and assure GOP control in Congress.

Please get involved at www.ArmyforTrump.com