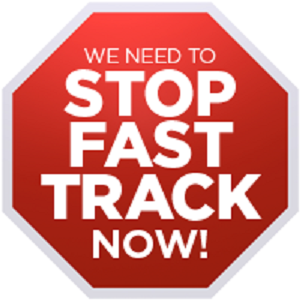 Can a Patriot Vote for Fast Track Authorization?

What about America? Does globalism, corporatism, and its attendant materialism demand national sovereignty as a sacrifice?[read_more]

At first it sounds like a joke. Then you realize it is a national nightmare.

The leadership of the U.S. Congress – Republicans all – are publically eager – enthusiastic in fact – to turn over more American sovereignty and Constitutional power, not to mention potentially American jobs, national security and your children’s future, to President Obama and a hodgepodge of globalists, corporatists, one-worlders, and freeloaders.

And you, Mr. and Mrs. America, won’t have anything to say about it. Zilch. Nada.

The Republican leadership in Congress is pushing to give fast track trade authority to Obama (even though many Democrats seem to oppose it!) to conclude and sign the Trans-Pacific Partnership (TPP), and follow on agreements, that will be presented to the Congress for an up or down vote without amendments. Take it or leave it.

To date, all the negotiations for the TPP have been in secret, and to what extent members of Congress – the peoples representatives – have even seen many details is unclear. But, bizarrely, they still can’t wait to jump on board with Obama.

But some things are very clear.

First and foremost, fast track authority to sign a treaty for any president of any party, debases the Constitutional order, checks and balances, and the concept of self-government.

A treaty supersedes both U.S. and state laws, and should be entered into only with the most serious scrutiny. If the TPP becomes law, and proves to be a horrible law, too bad, we’re stuck with it. So the logical question is; how do U.S. lawmakers give any president the power to negotiate a deal in secret without public debate? By voluntarily giving up the ability to amend a treaty, the Congress abdicates a Constitutional check on the Executive and ignores the citizen’s right to representation in the process.

If Obama is given fast track authority, there will be no brake whatsoever on how he proceeds with the content of the TPP. Period. Time and again this specific President has shown his willingness to ignore the rule of law and lie to the American people, and there is no evidence whatsoever that he will be restrained by the wishes of Republican leadership – any more than he has been restrained by them to date. (Sadly, his precedent in lawlessness may be the new “normal” for future presidents of both parties as well.)

On top of all of this, the TPP is just bad policy. Trade is a minor part of the TPP. It is a process to integrate fundamental political and economic policies with eleven Pacific nations. It evidently has unrestricted authority to override immigration laws and allow unlimited amnesty regardless of America’s existing laws – at the time when Washington already wants to massively increase legal immigration and refugees, and is unwilling to curtail illegal immigration. There are immense implications for union activity and environmental issues and how the treaty could hamstring American companies. Some have suggested that this treaty could even present the perfect opportunity for Obama to ban importation of firearms.

And this is exactly the argument against TPP generally, and fast track authority specifically: This agreement is being written in secret – we simply don’t know and we won’t know the depths of its dangers until the treaty is signed. Sound familiar?

No one has been more detailed and courageous in opposition to the TPP than Senator Jeff Sessions, R-Alabama.

Against this backdrop is the grim truth of the declining American economy and the experience of past “trade” treaties and negotiations. They suggest that America will be the only participant that observes the treaty, while others will observe it only when it advances their own national interest.

The American economic miracle that has been the locomotive for the rest of the world’s prosperity, is in deep trouble. We have trade agreements that allow virtually unrestricted access to the U.S. marketplace, while Americans often face huge hurdles doing business around the world through currency manipulations, VAT and consumption taxes, hidden tariffs, government subsidies for industries, and national “customs” such as bribery.

Meanwhile, the average salary of middle-income Americans continues its decade-long downward slide, as does their net worth. Nearly 50 million Americans are living in poverty and a record 46 million are on food stamps. A staggering 93 million Americans of working age are not in the workforce. Real unemployment and underemployment remains well over 10% – and much higher for minorities and the young. Since 2000, nearly 55,000 factories have been moved overseas and closed, along with nearly 3 million manufacturing jobs. In only a few short decades America has run over $10 trillion dollars in trade deficits.

Is the TPP a good treaty for America? Experience suggests it will not be. But here are some hard questions that every citizen should be asking their own members of Congress, before the vote for “fast track authorization.”

What about America? Does globalism, corporatism, and its attendant materialism demand national sovereignty as a sacrifice?

Do your members put the interests of American workers above the special interests lined up to ram though this trade agreement? Are your members committed to voting against TPP fast track authorization, and will they demand a full vetting of the agreement before voting for the TPP, so the American people can judge what they are getting, and what they may lose?

Finally, citizens need to ask tough question of their members about existing trade agreements and their impact on the economy; what are your members doing to promote growth, and reverse the economic decline in wages and wealth in the American working class? Are they willing to dramatically reduce the U.S. corporate tax rate, the highest in the industrialized world, or to look at new ways to tax imports reciprocally to the exporting country to cut U.S. corporate tax rates?

The American economic model and the American worker have proven time and again that there is no substitute for free markets, hard work and the creativity in the American spirit. It is long past time to return to that tried and true pattern. As always, the government isn’t the answer, it is the problem.

Can a Patriot Vote for Fast Track Authorization? was last modified: May 7th, 2015 by Michael Giere
fast-trackJeff SessionsObamaTPPtradeTrans-Pacific Partnership
7 comments