When Can We Impeach AG Herring?

Now that we have a budget and the state Senate has been reorganized, we can turn our attention to other housekeeping matters such as the impeachment of Virginia’s Attorney General Mark Herring.

We remember in January one of his first moves in his new position was to ignore his role as the defender of Virginia’s Constitution. Instead of arguing in support of a popularly passed amendment, Herring chose to not defend it, a move that is rarely seen but not entirely out of the ordinary. If only he had stopped there.

But no, Herring had to go even further and support the case against this amendment purely because he didn’t like the politics of it. His choice had nothing to do with procedural legality and had everything to do with political gamesmanship. King Herring decreed that he did not believe the properly filed, fully debated, thoroughly vetted and popularly passed amendment was a good law so he stood in suit against it, which is a prerogative he does not have as Attorney General. This is unacceptable. Any fifth grader will tell you about separation of powers and about how the branches of government need to operate with respect for one another under the law. His majesty in the AG’s office does not get to unilaterally make a call like this and therefore he needs to be removed from office.

So far, the call to remove Herring has not been front and center, reflecting careful deliberation by those who would support such a move. Delegate Bob Marshall of Prince William has now presented resolutions to impeach Herring on the grounds that he has violated is oath of office by not defending the commonwealth and by standing in suit against a law he is obligated to defend. But Marshall’s efforts have not really gotten off the ground.

In the meantime we have to deal with an Attorney General who will not do the job his tax payer supported salary is paying him to do.

Let’s pause for a minute to talk about the amendment in question here. I haven’t mentioned it by name or given a description of it because it does not matter what the amendment says, it is the law. Once again this amendment was properly filed, fully debated, thoroughly vetted and popularly passed by the people of Virginia through a ballot initiative. It is the law and the law is the law. Herring didn’t like it, so he voted against it at the right time to vote against. When the tallies came in the will of Virginia’s people was not the same as Herring’s position and as Attorney General he is obligated to respect and defend the choice Virginia made. If the amendment is unconstitutional then the courts will decided that, not the Attorney General’s office.

The challenge to the constitutionality of the aforementioned amendment is still working its way through the appeal process of the court system, without Virginia offering adequate defense in the form of legal representation. So Virginia has to take extra steps in order to get business as usually done. Earlier this month Delegate Mark Cole of Fredericksburg introduced House Resolution 541 which calls for “the Speaker of the House [to] be authorized to employ legal counsel to represent the House of Delegates in [the] pending litigation.” This needs to be done because as HR541 states, “the people of Virginia and the House of Delegates have been deprived of representation” in this case. Herring is forcing the General Assembly to spend money to hire legal counsel to do Herring’s job for him. Herring is also forcing the General Assembly to take time out their legislative schedule to make this happen. He is wasting our money and our time.

Let’s not forget that Attorney General Mark Herring has violated his oath of office. The law allows for his removal. The necessary steps are being taken. It is time for a new Attorney General, one who will respect the office and laws he is constitutionally obligated to defend. 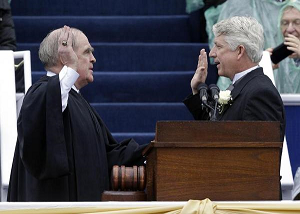 When Can We Impeach AG Herring? was last modified: June 25th, 2014 by Taller Than Madison

I have been exploring for a little for any high quality articles or blog posts on this kind of space . Exploring in Yahoo I finally stumbled upon this site. Reading this info So i am glad to show that I’ve an incredibly excellent uncanny feeling I discovered exactly what I needed. I such a lot definitely will make certain to do not fail to remember this website and provides it a glance regularly.

Herring isn’t going anywhere. Holder’s Hellions are on the loose. Having Howell even hint at such haughty intrigue could be hazardous to House members who have their heineys hanging out down along Tobacco Row.

Actually its the job of the Attorney General to decide whether or not a law squares with the US Constitution which is obviously supreme to state law. So it does matter what the text of the amendment says and given the recent Supreme Court ruling, there is a very strong argument towards it being in fact unconstitutional. That being said, I do agree that he should have just refused to defend the law, appointed outside counsel, and left it at that. Cuccinelli did that numerous times as AG, most recently with the Opportunity Educational Institution that was just ruled unconstitutional by Judge Poston in Norfolk.

Ensuring your client has adequate representation is indeed the key here, Max. Cuccinelli did it right; Herring has abdicated.

Like I said, I agree with that. But since as far as I know you too are a lawyer, what is your opinion of Herrings argument that George Schaefer had his own counsel and as he was also named in the lawsuit and also a Constitutional Officer that the state was therefore represented. Certainly it doesn’t excuse him joining the opposing side, which was totally political, but aside from the merits of the gay marriage debate, it seems like it would save a lot of money by not appointing another counsel to be paid from, unless I’m mistaken, the same pot of money as Schaefer’s.

Noted, and corrected. Thank you.

Why not debate the merits?

You got it. There’s not a chance in hell of this happening. Even if the House impeached Herring, there’s no chance in the same hell that the Senate convicts. You’ve just wasted a lot of time and money and made the Republican Party look like sore losers. Furthermore, Bob Marshall is thought of as a nutball to a majority of Virginians and is often considered a liability to his own party.

This is tilting at windmills. Pointless and useless.

Yes, that is a possibility, but this publication is still a credible source of objective conservative commentary, preferable to Bearing Drift. I’m sure you have heard of it…

Every website has their own target audience. This article is simply red meat thrown out to an audience known to eat it up, no matter how ridiculous the premise is.

Steve Albertson’s articles are usually high quality, so he’s got high credibility with me.

Samuel Langhorne Clemens wrote under a pen name. Does that detract from what he wrote? My view is that the CONTENT of this post is entirely appropriate for this forum. You are certainly entitled to disagree with the blogger’s point of view, but how about stating why instead of nit-picking his pen name?

Writing under a pen name is different than writing under a phrase. No one would have taken Mark Twain seriously if his name was “Longer than the Mississippi.” Whenever I want to have people troll comments for political campaigns I make them pick a real name. That way no one knows whether or not they are fake. Sometimes its the little things that make all the difference.

Ok, and how does it affect the CONTENT of his post? Picking on the name of the poster strikes me as a “shiny object” type of distraction from the points being made. I’d prefer to see an alternative point of view expressed and really would not care what the person who disagreed used as their posting name.

Knowing who the person is allows one to judge the credibility of the author. If I know the person is a member of the bar, I’m more inclined to believe their arguments than if they are, say, a teacher or an insurance salesperson.

In the case of this specific blog post, do you really need that info vs. the content of what they wrote? If you disagree or have facts to refute their assertions, why not post a counter instead of nitpicking over a poster’s name?

Because I already did post a comment with some counterpoints, scroll up a bit and you will see it. As for this post, yes, I would like to know the background since they clearly erred in saying that the content of the amendment has no bearing on whether or not Herring needs to defend it. If a Virginia Constitutional Amendment conflicts with a SCOTUS interpretation of the US Constitution, then it is well within the powers of the AG not to defend it. But like i said above, twice, he should not have joined the opposing side and he probably should have appointed outside counsel.

Thank you but I still like my red meat medium-well and grill seared, though not to the consistency of beef jerky. A pseudonym sees fit one’s privacy can be respectfully managed and maintained.

Sorry Bruce, but to me, that attitude comes off as somewhat shallow and pretentious at best, and maybe Alinskyite at worst. Taller wrote an articulate and cogent post of his point of view. By all means, take issue with it on a point by point basis if you disagree, but attempting to dismiss his point of view because of his chosen “handle” just adds fuel to the fire of those who want to characterize the Republican Party as a bunch of “rich ole white guys. ” If we truly want to “expand our tent” to win more elections (something we haven’t been doing very well lately), that type of attitude is self-defeating in my view.

Facts are facts. And before you yell “Alinsky = Unfair”, let;s be real. Alinsky was dead on target with his “rules” and both Republicans and Democrats have used those rules because they work.

I use my name. I stand behind my words. I take responsibility for what I say.

Really? How’d they work out for Cantor recently?

They’re still quite effective in the big picture… especially when used with stupid people who don’t think for themselves.