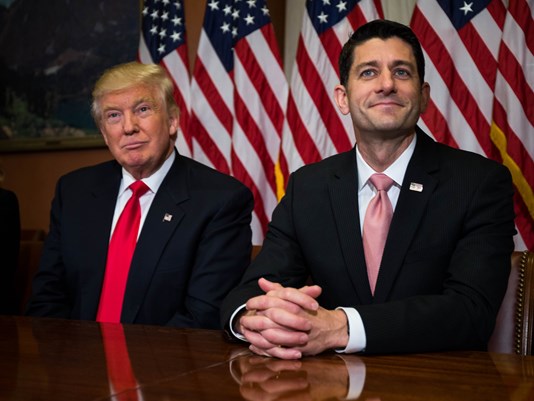 Can Trump Control The Domestic Agenda?

It is clear that Donald Trump intends to take his management of the Executive Branch seriously. Foreign policy will be, for good or ill, Trump’s prerogative. However, what about the domestic agenda? Trump has a laundry list of campaign promises that he has no authority to carry out. The United States Congress controls the domestic agenda and Speaker Paul Ryan and Majority Leader Mitch McConnell control the United States Congress. So who’s the boss here?

Veto power isn’t control. A veto doesn’t write legislation, it doesn’t cross the T’s and dot the I’s. Frankly, I’m quite pleased that Presidents do not set domestic agendas. I voted for Congressman Wittman to be my voice in the United States Congress, not to serve as a Yes Man to Donald Trump. In fact, it is my hope that all our Congressmen will serve as checks and balances on President Trump; as they did on President Obama. Checks and Balances are good.

In reality, I expect that America’s domestic agenda will be controlled by Speaker Paul Ryan and his committee chairmen. Majority Leader Mitch McConnell will serve as a check to make sure that Ryan doesn’t bow to his conservative flank (which is likely to infuriate conservatives, myself more than others). President Trump will be given 100 days to sign off on popular legislation as Ryan and McConnell try to move common ground legislation first. After that, I believe Trump will be left to focus on executive management and foreign policy (and don’t worry snowflakes, he’s unlikely to start World War III).

I’m worried that President Trump’s biggest fans will believe that President Trump ought to wield even more power than President Obama tried to wield, primarily because populists have no respect for the Constitution, the rule of law, and our traditional checks and balances. President Obama’s skirting of the rules, as it were, has set precedent for Presidential mischief and it would not surprise me one bit if President Trump tries to go bigger and bolder than did Obama with his “pen and a phone” rhetoric. Frankly, this would highlight a profound erosion of our Constitutional Republic. I know populists get their panties most in bunch at the mere mention of the Constitution, but I believe that Speaker Ryan, and Senators Lee, Paul, and Cruz will remind the populists early and often that the Constitution ought to remain sovereign.

The question is, with such small minorities in the House and Senate, can conservative Congressmen and Senators serve as a check and balance on Ryan and McConnell? After the first 100 Days and a great deal of progress and enthusiasm as Republicans appear to be working together, does Ryan and McConnell begin to execute their own agenda? Will that agenda mirror the kind of corporatism we saw during the Bush Years, while President Bush’s focus was clearly overseas?

What does Trump do in response? It seems to me, given what we know of Donald Trump (the man), that he will use Ryan and McConnell, as well as Pelosi and Schumer’s agenda’s as leverage for making deals. The establishments of both political parties have a real chance of getting a great deal of what they desire so long as they give Trump some of what he wants as well. That’s the art of the deal, but will it serve the interest of the United States of America and Her economy?

Will Trump’s trillion-dollar infrastructure boondoggle merely be the beginning of a spend-happy federal government? Ryan and McConnell have already bailed on lawfully agreed-upon spending caps. Thrifty conservatives in the House and Senate do not have the muscle to stop Ryan or McConnell’s domestic agenda. If Trump doesn’t side with conservatives, then it seems reasonable to expect that conservatives will not have a seat at the table.

This is not pessimism. This morning I am simply documenting my own attempt to set my own expectations. I’m not convinced that this arrangement over the next two years will make me particularly unhappy. Real change happens at an excruciatingly slow pace. President Trump will do a far better job managing the Federal Government than did his predecessor. Speaker Ryan and Majority Leader McConnell can put their most conservative foot forward, given the fact that they will have a Republican President to sign legislation like a repeal of Obamacare and the passage of the REINS Act. The voters voted and kept Ryan and McConnell in power, and they voted to put President Trump in charge of the Executive, and we cannot undo, through wishing or principle, the will of the people.

For Constitutional Conservatives and Libertarians, the first 100 Days is our window for witnessing progress. After that, our expectations should be low. We should remain focused on sending more constitutionalists to the House and Senate, to the General Assembly, and to our local town council and Boards of Supervisors.