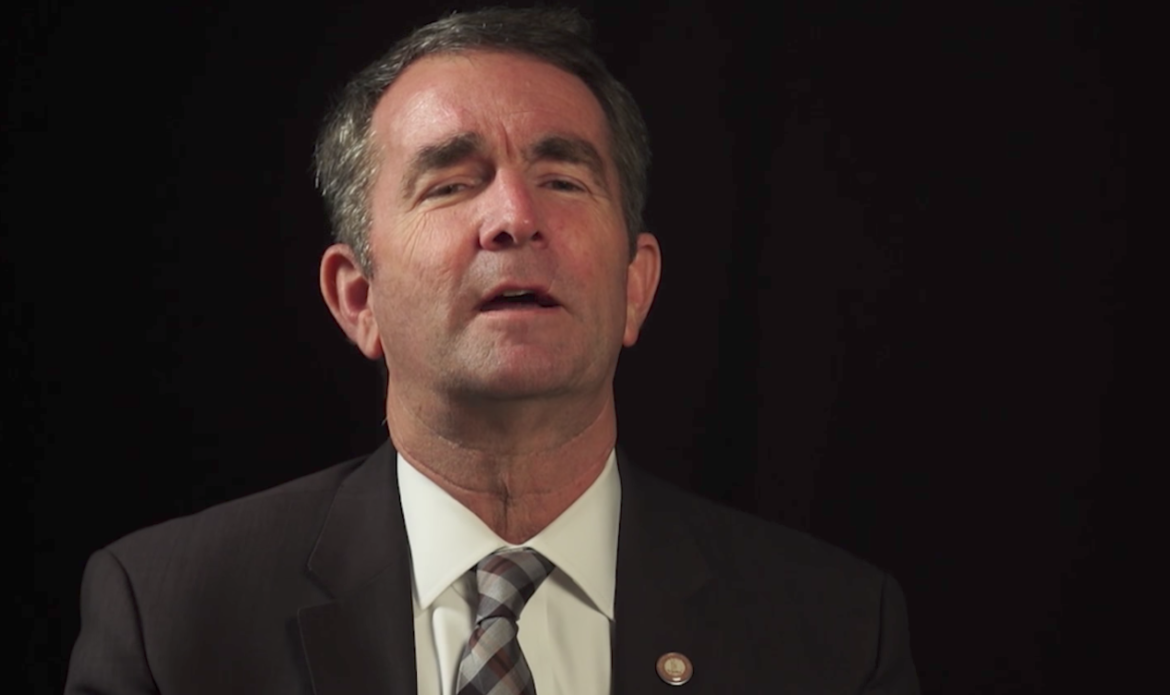 It’s time for Ed Gillespie to answer one simple question: are you with Virginia or are you with the KKK?  Silence, non-answers, and excuses are simply unacceptable.”

Northam’s press secretary even went so far as to Tweet that Gillespie’s “silence is alarming,” as if the man actually supports the Klan.  (It’s worth noting that, in truth, Gillespie has indeed condemned the planned Klan rally).  What is actually alarming is that the Democrats brazenly and cynically undertake such despicable tactics and get away with it.  Usually.

This time, that might be harder because Ralph Northam carries some pretty rotten baggage.  You see, his family hails from the Eastern Shore, where they’ve owned land for at least 170 years or so.  And they owned more than that, too: they owned other human beings as slaves.  Records indicate that Northam’s great grandfather owned slaves until well into the Civil War.  The Eastern Shore was largely unscathed by the war, and the Northams’ wealth—generated in part through slave labor—appears to have continued.  So much so that his father, a retired judge and a now 92-year-old grandson of slave owners, was able to donate $229,000 to Northam’s first run for Virginia Senate in 2007.

Ironic, then, that a direct beneficiary of that most odious institution attempts to hang one of its ugliest legacies around the neck of Gillespie, who is both a Catholic and a son of immigrants (historically groups targeted by the KKK).  That’s an old and cheap political trick…tarring your opponent with your own weaknesses to inoculate against counter-attack.

To be clear, Northam himself did not own slaves.  Of course.  And many good Virginians hail from families who owned slaves.  That’s not a fault of the descendants.  Where the fault lies here, though, is when one of those descendants glosses over that history and its benefits to him, deflecting criticism with nasty and unfounded insinuations about his opponent supposedly sympathizing with the KKK.

Well, many black leaders from around Virginia are having none of it.  Led by Jeff Dove, an African-American Army veteran who is running for the 2018 GOP nomination in the 11th Congressional District, a group of these leaders earlier today issued the following press release:

Using the KKK for political leverage has no place in Virginia

Jeff Dove who is seeking the GOP nomination in the 11th Congressional District, said Northam was giving the racist organization attention it neither deserved nor warranted. The Klan has said it will hold a rally in Charlottesville and Northam has tried to accuse Republican nominee Ed Gillespie of failing to sufficiently denounce the plan.

“The Ku Klux Klan is despicable. So is using them for political leverage the way Ralph Northam and the Democrats are trying to do,” Dove said.

“As an African American man I am well aware of the Klan and its origins in the Democrat-dominated deep south. I’m a Republican because it is the GOP that was founded to end slavery and has had to stand up to the Democrat party repeatedly to defend the concept of equality for all. Today, the Klan barely exists and Ralph Northam is giving them the attention they crave by trying to inject them into the governor’s race,” Dove said.

Kaylene Seigle, Harrisonburg School Board Member reacted to this incident by stating.

“We need leadership in Richmond who will rise above the type of politics that uses race-based accusations and innuendo. Our Commonwealth deserves better from the Ralph Northam campaign. Ed Gillespie is the type of leader our state needs to bring people together, not divide and tear us apart.”

“While Northam tries to divide us Gillespie will be the one to bring us together so that Virginia can once again take its place as one of the top states in the country.” Dove said

“When politics becomes driven by race baiting and divisive techniques it’s a race to the bottom. Our politics needs to reflect the best of humanity and the things that brings communities together. While Northam goes low, we will go high.”

“Elections in the Commonwealth have traditionally been about policy. Today’s invitation from Ralph Northam asking Ed Gillespie to join him in condemning the KKK in Charlottesville as if Ed couldn’t and wouldn’t, is a race-baiting antic that is, in my opinion, beneath the Ralph Northam campaign. Virginia voters, and the African-American community, deserve better than that. Ed’s past actions have demonstrated that he has been above reproach on race-related matters and has issued many statements in the past supporting this fact. I call on Ralph Northam to raise his campaign’s standard, apologize to Ed Gillespie, and stop trying to insinuate something about Ed that obviously isn’t true.”

“As an independent, I’m disappointed that politics today have become so partisan and accusatory. Virginia has normally been above this. Today’s suggestion about Ed Gillespie and the KKK rally is beneath the office of Governor or anyone running for it. I hope this is not the type of campaign that Ralph Northam intends on running.”

Davon Gray a resident of Woodbridge had a sentiment along the same lines.

“This year, Virginia has the opportunity to elect a Governor that will help improve our state and also raise the standard for how we do politics. Ed Gillespie is a good man who respects everyone and cares about all Virginians, no matter their race, religion or background. It is important that this year’s election focus on the issues and how we can move our state forward.”

Across the Commonwealth, Virginians are calling on Northam to halt the attacks and apologize to both Gillespie and the state’s African American community.

Northam served in the Senate with a bipartisan reputation in Richmond for honesty, civility, and grace.  Clearly, that’s all gone now, which is pretty sad.  It’s too bad that Northam thinks he’s got to crawl in this kind of a gutter to win an election.

UPDATE: How did I forget to include this gem from four years ago?! This is when Ralph Northam refused to shake the hand of his black opponent, E.W. Jackson: