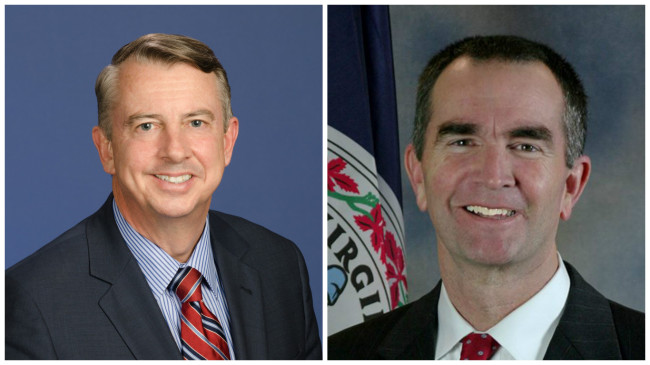 At 5:00 on Friday candidate for Governor Ralph Northam announced he would agree to 3 debates with Ed Gillespie who had previously accepted invitations to 10 debates.  Gillespie responded:

“Lieutenant Governor Ralph Northam’s long-awaited response of only three debates is insulting to voters across the Commonwealth. With so many serious issues at stake, Virginians deserve to hear the clear differences between us.  The Lieutenant Governor debated his primary opponent five times, so why debate so few times in the general election?  We should respect the debate organizers and more importantly the voters.

Northam has also agreed to 7 ‘joint appearances’, whatever that means.

Hmmm… Elected official wants 3 debates. Unelected challenger wants 10. Who in their right mind would risk 10 chances to step on a land mine? Ed is hoping that Northam is stupid. Barring that, Plan B is to buy a shovel and bucket and go digging for dirt. The Georgia state election forecast predicts Ralph will have his own miners digging for gold in California.

ooh puh’lease …. three is already aplenty, two would be excellent, one is necessary … BECAUSE it is the quality of questions and quality of responses – meaning, whether or how they ENGAGE the real, hard issues that voters face – that matters, not the quantity of debates … the Republicans has SO MANY debates in their Presidential nominating process and they still got a serial liar, boasting braggart, and moral idiot … not to mention an idiot about American Constitutional history.

Yes exactly.
Some of my concerns may not be addressed;
Privatization of, Alcohol ?
Uranium mining?
School vouchers, new additional school funding=2 programs?
Job guarantees in infrastructure spending?
I 81 “the highway of death”?
Now he wants to give power to the localities? This should be a two way street the locale should be able to hold the State accountable, a little reason not to just let any Governor run a muck.
I am sure that all of us will desire more than any debate will bring.

Localities CANNOT exercise any power not DIRECTLY GIVEN TO THEM by the LEGISLATURE: ‘Dylan Rule’ state. Sorry, but the Legislature will need AFFIRMATIVELY to give up power.

I’ll be more than happy to debate Ed. Have Ed ‘s COS get in touch with me to set up the dates.

If Ed refuses to debate me, what is Ed hiding from?

I love to see you polish the floor with him.
It would show just how out of touch he is with the legal working man.
Ed is one of those Republicans , the kind of Republican that sucks the equity out of legal wage earners.
Take notice I do not speak of a minimum wage increase. Just enforce the law, properly.
It took a Republican to classify illegal aliens and unlicensed contractors a “bona-fide independent contractors “.
Jim,
one day you and I will be at the same place and I would love to show you the flyer from The Lynchburg VEC
on the credentials they will “accept ” to deem contractors legitimate.
One would believe that the TEA Party (being more than a republican mouthpiece) would post it on all Va. sites.
Thanks for the TBE link on Gillespie and TARP!
Have you ever looked at 84 lumber and the loan they took to restructure and add their finance and insurance arm ( sold to their sub contractors). Have you ever looked at shoddy construction in Va?
Do you remember the Superbowl immigration add?
The Commonwealth currently looking at Contractor License reciprocity with Pennsylvania?
How will out of state companies and illegal foreigners comply with the Va. Employment Compensation Act?
Raymond Wood was violently murdered by individuals who fled the park murder Montgomery County MD to Lynchburg, Va to hide and work as many illegal aliens have been doing since the McDonnell Administration. It beats all to have Cuccinelli use health code regulations to close some Abortion Clinics , but refused to use Contractor Regulations to enforce employment law.
Yes, Virginia
we already have a E-Verify system and elected Republicans REFUSED to USE IT.
“YOU ARE REQUIRED TO ENSURE THAT ALL SUB-CONTRACTORS AND TRADE RELATED INDIVIDUALS THAT YOU HIRE HAVE THE APPROPRIATE LICENSE ISSUED BY DPOR”
Licensed Contractors ARE conspiring with unlicensed contractors in committing Class 6 Felonies in Va.and Ed is not smart enough to figure this out.

I agree with you. And, the T Party, in my opinion, is just a tool of the establishment. Just like Ed Gillespie.

I walk my neighborhood in the morning and the evening , I sometimes sit on the front porch at Thomas Jeffersons’ Poplar Forest home watch the sunset, smell the honeysuckle and reflect.
Ed said;
“I will cut DPOR Regulations and create jobs”. Which regulations?
Predicted net job growth?
NO answers ever provided.

Thomas Jefferson said; “Laws made by consent must not be trampled by individuals”.
Governor McAuliffe is making strides in enforcing laws in particular EO24 (JLARC 427) , I am positive that Northam will follow suit with this form of “elected Executive Leadership”
Ed will come back to LU.
I stood on Liberty Mountain one day at work and said; “You see the Peaks of Otter from this moutain to that moutain across this valley I will die before I rest on ending illegal employment”.
Ed is lacking that passion and tenacity.
I am far from the populist and dam sure far from the “gutters ” , of the elected , just a simple Virginian nothing fancy.

Only 3 is two too many

It is important to note that this site and the comments/answers depicted above is to be used as an illustrative example of what some individuals have achieved with this/these products. This website, and any page on the website, is based loosely off a true story, but has been modified in multiple ways including, but not limited to: the story, the photos, and the comments. Thus, this page, and any page on this website, are not to be taken literally or as a non-fiction story. This page, and the results mentioned on this page, although achievable for some, are not to be construed as the results that you may achieve on the same routine. I UNDERSTAND THIS WEBSITE IS ONLY ILLUSTRATIVE OF WHAT MIGHT BE ACHIEVABLE FROM USING THIS/THESE PRODUCTS, AND THAT THE STORY/COMMENTS DEPICTED ABOVE IS NOT TO BE TAKEN LITERALLY. This page receives compensation for clicks on or purchase of products featured on this site.

I would like to see the Va. Tech Debate (attempted abduction at Va. Tech June 2012) this crime was committed by an illegal alien working here illegally with NO penalty to the employer.
I would like to see the LU Debate
also where we have had murders, drugs and child molesters committing crimes while working here illegally with their employers also violating State laws.
http://watchdog.org/202012/subcontractors-shadow-economy
How come Republicans when presented with an opportunity to broaden the base they refuse to collect?

No , need to debate.
Ed could reach out in good faith to Va. Employers and show support to them and discuss the many merits to Governor McAuliffes Executive Order 24.
I guess no concern for employers , employees , fraud.
Was Ed really the son of an immigrant? How come he does not speak of their exploitation?
Is he really a moderate?
Or just a mere corporatist?
EO24 is great, just think if McDonnell implemented it the day of sending the letter to DHS Janet Napolitano on illegal aliens. A little leadership never hurts anyone , the lack of leadership does.
Let’s talk jobs.
I like the Democrat implemented
EO 24.
What 3 debates did the next Governor agree to?

WOW!!!!
Well Ed may like one of those jobs after he does not get elected because of his failure to articulate to Virginians’ on how he would create job growth. Yes we know of the Voodoo economics of infrastructure spending , so we run up the Va.Credit card to spend on projects that will employ illegal aliens?
Just how does that broaden the base?
I know a being Doctor does not require near the education as a lobbyist does , please forgive me as I pick myself up out of the gutter and ask about policy?
What about EO24 ?
MR. Conservative?
MR. Moderate?
MR. Corporate Lobbyist?
Oh yea MR. Globalist?
When we undermine American wages for the importation of cheap goods from Communist Countries does that not make you a “Global Socialist?
Not “patriotic” AT ALL!