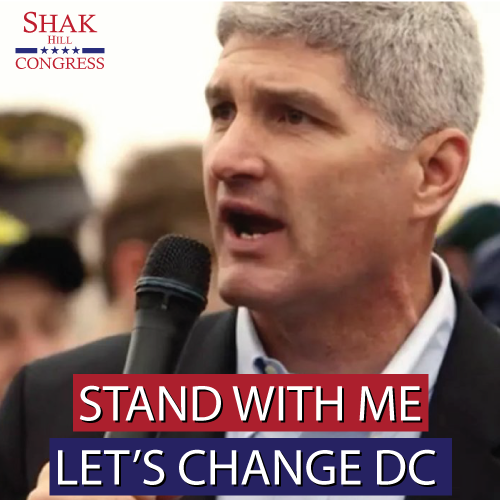 Candidate Shak Hill responds to false stories about him

Earlier this week candidate for the Republican nomination in the 10th district, Shak Hill, was accused of writing some disgusting posts on a website.  To anyone with more than 3 brain cells, it was obvious Hill had not written the articles.  It was an aggregator that put up 3 bad posts out of thousands that appeared on the website.  Unfortunately, Hill overlooked those 3 ridiculous blog posts that clearly weren’t written by him.  On Thursday Hill responded:

Make no mistake: people are hurting.

[…] 11. Candidate Shak Hill responds to false stories about him […]

Is there somewhere I can go for the explanation and rebuttal of the false stories now posted at shadyshak.com?

You just lie and lie….then what was this article all about in October of 2016? FAKE NEWS by Jeanine?

is Shak really his name?

I have heard he changed it.

She’s asking what it was before Wayshak.

It was CaddyShak, but he shortened it to Shak for obvious reasons.

We’re going to want to get it correct for his Congressional biography right?

From what I can put together:

He was born Edward Wayshak. (I believe Wayshak is his mother’s maiden name?)

Went to Air Force Academy as Edward W. Mangum. I’m guessing he didn’t do ‘Maverick’ or ‘Goose’ so ‘Shak’ musta been good enough (I’d really like to know if it was something different, we could start guessing — ‘Rainbow’ or ‘Palomino’ perhaps??)

After some amount of time they name changed and became Edward Wayshak (or Wayshak Edward) Hill and Robin Hill. (Genealogy must be a bitch for this family.)

Shak Hill is a better political name than Edward Mangum, or Gary Hartpence, or William Blythe.

Anybody got additions or corrections?

let me rephrase: is Shak the name on his birth certificate? why would he change his name?

Let me expand… Shak is his legal name as it is the name he uses, unless he changed it at some point in the past for nefarious purposes (like evading law enforcement) it is not my business or yours whether or not that was the name he was born with.

You are exactly right. It is not my business as I am not a voter in that district. However, if I were such a voter, it would certainly be my business.

No it would not as it would have no bearing on what should matter to you… mainly, will he honestly represent his constituents if elected.

No it doesn’t… it sounds like you and others are focusing on superfluous nonsense.

Pretty unhappy with Rep. Comstock. Why have a Republican representative if she is just going to mimic the Democrats. Any speculation about anyone else on the R. side challenging her?

Shak was Cuccinelli’s right hand man disenfranchising Trump Delegates in Harrisonburg and then decided to bank on a Clinton win a run for senate instead of helping the Nominee. He is no better than Comstock. Heck, at least she was honest about supporting Killary!

Shak was never a “never Trumper”.

No, he was just running for Senate hoping Trump lost.

Haha. He and Massie don’t get along at all, and he never made any moves toward running for Senate.

He has run for 2 offices in his life, one a victory and one not. But offering a conservative alternative to Gillespie is certainly no sin!

“he never made any moves toward running for Senate.”

He floated it sure, but never filed or raised money. He was happy, as the rest of us were, Trump won.

“He floated it sure, but never filed or raised money. ”

Sounds like a typical anemic Shak Hill effort. He was also telling people he planned on jumping in the LG race last year. That didn’t go well either.

This guy is a loser who isn’t going to win anything. Conservatives have a prime opportunity to knock off a RINO and we are going to blow it running Shak.

Shak has been both on the winning and losing side of running. He knows the sacrifices it entails and how to hold Barbara accountable for her voting record. He will do great.

Other than that, I’m chuckling about an internet hater too afraid to put his last name to his comments, calling someone else a loser….

I’m chuckling at one of Shak’s consultants spending all this time arguing with some internet hater too afraid to put his last name to his conments.

Can you guys do anything but ineptly lie?

i thought he had a position with the Cruz campaign

Oh he did. And was backing him long after it became clear the only chance Cruz had was to steal the National Convention like he did in Harrisonburg.

Nothing was stolen Chris. Just because you did not know the rules going in does not mean they should have been changed on the spot.

And what if he did? Are you really so petty to be that much of a sore winner?

Not endorsing Trump could prove wise should the New Yorker lose the general election handily. Cruz supporter Shak Hill, who ran for U.S. Senate in Virginia in 2014, said he’d rather not hear Cruz mention Trump again.

“For Senator Cruz, and other like-minded conservatives like me, a short-term endorsement would violate a longtime principle and fight,” Hill said. He said Cruz should not speak in opposition to Trump “but I would absolutely not endorse. Principles matter.”

The Cruz team feels the opposite.

“Even if (Trump) jumped into high gear, he can’t do it,” said Shak Hill, a Cruz campaign leader in Virginia. “That’s where he’s been shut out of the game.”

Trump’s delegates must vote for him on the first ballot at the convention. But if no one gets a majority, most of the delegates can then bolt if they choose.

Trump is the only candidate with a realistic path to the 1,237 delegates needed to clinch the nomination before the convention. But the path is narrow, and Cruz is working to block him.

Cruz has built an organization of volunteers who are working in state after state to get his supporters selected as delegates, even those who must vote for Trump at first.

Trump is just ramping up his operation, but in some states he’s too late.

In Virginia — a state where Trump won the primary — he has missed the deadlines to assemble lists of potential delegates. Cruz, however, has delegate candidates in 10 of Virginia’s 11 congressional districts.

The application deadline was last month.

How about you stop fighting the last war and focus on this one (and notice that Shack supported Cruz who has quite frankly been consistently supporting Trump’s agenda even though Trump gave him ample reason for personal dislike).

And you were not disenfranchised… the system worked the way it was supposed to.

I suggest you check out Rep Comstock’s voting record on immigration issues so far during the 115th Congress. Her 30% rating and D grade indicate she needs to replaced with someone who will vote to benefit American citizens and American workers rather than to vote to flood in more foreigners!

To access all her votes on immigration issues, type in “Immigration Grades on Numbers USA, type in Virginia, and get fully enlightened, as every voter should do before voting in 2018 mid-term elections! We currently have hundreds of members of Congress aiding and abetting the illegal alien invasion, and it’s time they’re ousted! The only way that happens is through death, retirement, or the ballot box!

For many conservatives, immigration is the ONLY issue. Nothing else matters. Shak Hill clearly does NOT understand that. With respect to immigration, I cannot see any difference between Shak Hill and Commstock. RINO versus RINO.

I shall vote for Corey Stewart, but not Shak Hill.

Shak should have made sure these didn’t appear on his site, but this doesn’t discredit him the way the Comstock establishment crowd thinks it does. Nice try.

I absolutely agree. It doesn’t discredit him but it sure reflects poorly on his fitness as a candidate.

We have the opportunity to knock off another RINO. But it won’t happen with Shak.

I’m sure this came from the Comstock campaign – they should be scared. She has lost so many of her supporters by her anti-Trump rhetoric and liberal votes…..

Yea Yea Yea. Shak was part of the Cuccinelli Cabal that slated you out in Harrisonburg.

We need a Trump Supporter to step up!

That would be a good title for an Encyclopedia Brown novel.

Actually Shak led the effort to include Corey on the slate. Ask Corey, who is supporting Shak onnthis race and encouraged him to run. Shak was never a ‘never Trumper’.

Yes, you guys spit in our face and then gave is a napkin (Corey) and expect us to say thanks.

Nobody buys that. This isn’t your party anymore. Sit down.

Ask Corey. He knows the truth. That’s why he is backing Shak.

We do primaries now so creepy loaners like you and Shack and Cuccinelli can’t dictate who is or isn’t a conservative.

Telling me repeatedly to sit down doesn’t change the facts, kid.

Also, in a free country, we can all say what we want that’s what the term ‘Free Country’ means.

Anytime someone mentions Corey, their credibility drops substantially. I’m no Corey hater, but jeez, is that the best you can do?

Each man runs his own race, and there are tons of endorsements coming, but I’d point out Corey DID win the 10th two months ago. Also, he did deserve to be a delegate to Cleveland.

If Corey backs Shak, that’s a good reason not to support Shak

Another lie out of Steve Thomas mouth. Corey said nothing to Shak!

John went to the Convention as a representative of the 4th District.

She’s lost my support. Never thought I’d ever get to this point with any elected Republican, but I’m past the point. I’ve rationalized her votes as “doing what she needs to do in a swing district”, but have come to realize that SHE is the reason this is potentially a swing district.