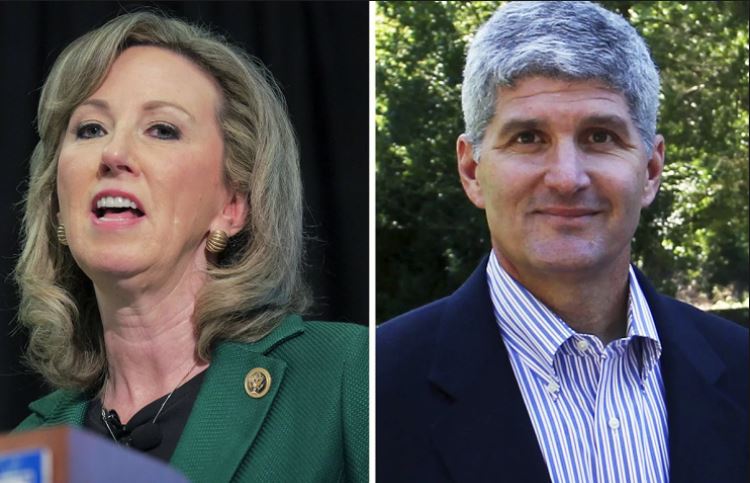 Candidates for Congress and Senate file petitions to run

To file for a Congressional run for office a candidate must file at least 1,000 signatures from voters in the district.Â  On Monday, the first day petitions could be submitted to the board of elections, Congresswoman Barbara Comstock filed over 1,500 petition signatures.Â  Her challenger, Shak Hill, filed over 1,900.

Senate candidate Delegate Nick Freitas is required to file 10,000 signatures with at least 400 from each Congressional district.Â  Freitas has filed 12,838, thanks to his grassroots army across Virginia.Â  On MondayÂ he thanked his supporters who helped in this effort.

Candidates may continue to file petitions until March 29th.

Let’s be clear tonight. No matter the specifics of the outcome in PA, you can see the passion to vote against Trump is still hot. Comstock will lose. All Republicans in northern Virginia will lose. They forfeited their right to hold office when they chose not to make removing Trump a priority. If the Republican party does not reject Trump the damage will be a generation in the wilderness. I am going to work very hard to unseat Comstock. A person I helped vote in. Everyday the passion to act stays high. #nevertrump

History is chock full of the results of passion. At some point you will come to wisdom about passions, acts, and consequences â€” or you wonâ€™t be allowed that choice.

Fret not, it will be The President that will step in to help re-elect Babs/Shak in 2020.

Clearly you live in a continued world of fantasy.

Corey got more than his required number of signatures in ahead of Nick’s. You might want to include this information.

Only in America…sang Jay Black and the Americans
Spinks did beat Ali..
The Ball did go through Bucknersâ€™ legs and the Mets won.
Doug Flutie do throw the Hail Mary Pass and Boston College won.
Only in America ..land of opportunity
Shak Hill…I donâ€™t think so.

Nick Freitas gathered his signatures thru volunteer and grassroots efforts. It’s a significant start to a great campaign.

Is there any other way?

Yes, some candidates pay to have signatures collected. I have heard that this is how the Stewart campaign did part of their signatures and one other Senate candidate.

Oh, just like the phone banks and door-to-door knockers. Thaddeus McCotter and Newt Gingrich come to mind for some reason.

You know, I was so looking forward to Team Corey and Team Nick respecting the 11th Commandment and not going all Ninja in the Upperville meadows.

I prefer my nominees and their supporters to run FOR the nomination and AGAINST Killer Kaine.

EXCEPT for the 10th CD which has been declared one of the specially designated denigration races â€” for there is simply too much self-induced golden political humor to ignore. Seriously, holding your tongue and lying prostrate during this race could literally make one shak and jelq.

In all due respect that was an outright lie that Corey paid to collect signatures. Corey already had a wide network of volunteers set up from his enormous grassroots effort in his Governors primary. You donâ€™t come within 1.4% of winning a primary against the weight of the entire Establishment evening winning the 10th Congressional District without a significant grassroots organization.

The facts are NEVER TRUMPER and Libertarian Freitas set up a pay scale for the collection of his signatures to include monetary incentives and writing recommendations for those collecting signatures. It is set up on his facebook.

Nick is a #never? Then I might be able to make book on Babs after all.

And remember how well the Hessians worked out for KIng George.

Corey/Trump people will always step forth and do the job that Republicans are wont to do.

Although sometimes I wonder if subbasidizing campaign workers and volunteers is just the wave of the future.

Also Freitas failed to follow the rules in turning in his signatures. Freitas the NEVER TRUMPER and Libertarian has been erasing his anti Trump tweets at a fast pace but many have been captured.

Freitas is being supported by the Establishment and Inspire Loudoun.

â€œFreitas now backs Trump, but in deleted social media posts from 2015 and 2016, Freitas referred to him in as a â€œ5 time draft deferring â€˜tough guyâ€™â€ who would â€œtake some candy from a small child… or maybe kick a kittenâ€ and said Trump is not the candidate for â€œliberty minded conservatives.â€

So quite surprised that Inspire Loudoun a supposedly pro Trump group would support a Never Trumper as a candidate.

First off, it is Loudoun Inspire. Second, the group has not and will not endorse in a primary. There are supporters for a variety of candidates in the group and folks are free to support whoever they want. Lastly, all the rules were followed and Nick is on the ballot. https://uploads.disquscdn.com/images/ac15be485fb86776036076c6c9fff7e09b8eac56861b3e0566b4a7ee6d3e3df3.jpg

Initially they werenâ€™t because he did not go through the RPV pre check. Sorry about the confusion of the name Loudoun Inspire because there is a Inspire Loudoun group as well.It is your own members discussing what I said about helping Nick.
I also know there are Corey supporters in your group as well

Is there something wrong with the LCRC organization? I think we got more groups than members. MY new group is LILI (Loudoun Inspiring Loudoun Inspirees.)

I a man not a member of any Loudoun group.

It’s not polite to brag.

I donâ€™t think
Anybody is on the ballot as itâ€™s too early for ballot to be certified and approved right?

What were those rules? Iâ€™m sure that any irregularities in petitions will be noted when the petitions are examined and (if need be) challenged.

How does the petition review process work anyway?

Shak had $37,000 cash on hand as of January. Whatever his positive qualities, and they are numerous, how can he possibly defeat Barbara Comstock with no money? Look it up for yourself. https://classic.fec.gov/fecviewer/CandidateCommitteeDetail.do

Shak has out raised 2014 Brat by this point. You don’t need to outspend an incumbent whose popularity is in the low 30s.

Wait a sec, Shak is running against Brat??

I thought Shak was a devout Catholic so why is he advertising offering free corned beef sandwiches tonight during Lent at his fundraiser tonight?

Itâ€™s an ancient Arabic technique to enlarge and enhance political stature, you start by grabbing the base of support and….

No wait, thatâ€™s something else entirely.

â€œBecause the Catholic supporters were supposed to eat the corned Herring?â€

No he thinks he is Brat Lite

Steve, How come someone is commenting on Shakâ€™s twitter by the name of Former GOP that is actually a Democrat!

Also what are the two businesses Shak frequently talks about being very successful?

Steve, Has the Hill campaign done any of their own polls using a pollster or are they using Democrat polls? Who is your pollster?

Which committee was that? Friends of Shak Hill?

Got it, the newer committee… ‘Acquaintances of Shak Hill?’

Freitas is a globalist and world order type.
Read the quote below he gave from a speech at Omni Homestead Resort last year
â€œ
â€œDuring a speech delivered at the Omni Homestead Resort in Hot Springs, Freitas said he would not â€œbashâ€ his fellow Republican candidates butinstead vowed to attack â€œa world viewâ€ that “tells people they are something less than they actually are.â€

Without mentioning the Democratic Party, Freitas went on to offer his interpretation of the opposing partyâ€™s views, saying his â€œ
During a speech delivered at the Omni Homestead Resort in Hot Springs, Freitas said he would not â€œbashâ€ his fellow Republican candidates butinstead vowed to attack â€œa world viewâ€ that “tells people they are something less than they actually are.â€

Without mentioning the Democratic Party, Freitas went on to offer his interpretation of the opposing partyâ€™s views, saying his â€œenemy world viewâ€ is one that â€œtells people that youâ€™re a random collocation of atoms, that youâ€™re here purely as a mistake of time, chance and matter, and because of that, you need wise overlords in the government to micromanage life for you and take care of you.â€

â€œItâ€™s a world view,â€ he continued, â€œthat treats free people as if we were subjects instead of citizens, and I despise that world view.â€

Freitas is a California native who moved to Culpeper County in 2010. He served in the military from 1998 to 2009 and is a consultant for defense contractor KeyW, according to his LinkedIn page.

Freitas is a California native who moved to Culpeper County in 2010. He served in the military from 1998 to 2009 and is a consultant for defense contractor KeyW, according to his LinkedIn page.â€

Having a “world view” doesn’t mean you’re a globalist. A world view is just a philosophy.

Corey Stewart also filed for Senate today, with just under 15K signatures (according to his Facebook page)

Must of been a slip up not to mention Corey but typical BS from the BE.

He doesn’t talk like Marco Rubio, polished.
The Delegate is like a nice new BMW, but that will not get you through the hill of SWVA, for that you will need a 4×4 with a winch a couple of dings and dents amount to experience.

Thanks for letting us know.

This doesnâ€™t help a campaign either!

Youâ€™d think that campaign big shots would recognize that bloviating on social media is not as forgiving as it is in smoke-filled rooms.

Corey has been the front runner from day one. I would think you would have made the effort to post his numbers up on your site!

Yes TBE intentionally left off Coreyâ€™s numbers( Almost 15,000) NEVER TRUMPER Freitas did not go through the proper RPV pre check fromwhat folks are saying.Since he is the Establishment pick they will bend the rules for him.

Freitas made promises on his Facebook of writing recommendations for anyone that help collect signatures along with a bonus. Looks like he will be entertaining himself writing all thos recommendations.

Coreyâ€™s 15,000 signatures were collected with 100% volunteer effort. Some of the campaigns are paying per signature collected.