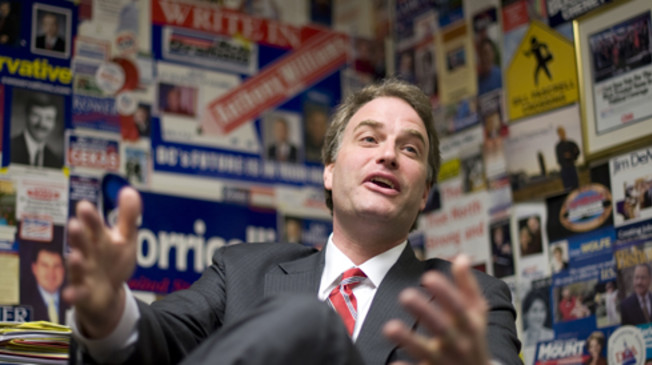 Robert Hurt announced this morning that he is retiring from Congress after three terms. The father of three and former member of both the Virginia House of Delegates and the Virginia Senate said that he plans to return to private life after completing his term in 2016.

First made public yesterday by Larry Sabato, news of Hurt’s retirement unleashed a torrent of behind-the-scenes activity among Virginia Republicans eager to know who would replace him.

Although several names have been floated as potential successors, two Virginia Senators have emerged as the most likely candidates. Sources in the 5th District have indicated both Sen. Bill Stanley (R-Franklin) and Sen. Tom Garrett (R-Buckingham) are maneuvering to secure support for bids for the Republican nomination. Sen. Garrett, last seen leading the effort to challenge consolidation of power in the Virginia Senate, has indicated to The Bull Elephant that he will be making a run and publicly announcing his intentions soon. Sen. Stanley’s office confirmed that the Senator is actively exploring a bid.

AnotherÂ potential candidate being discussed by GOP leaders in the district isÂ retired U.S. Army General Jerry Boykin, who is currently serving as Executive Vice President of the Family Research Council. Also in the mix is Ralph Smith, a former member of the Virginia Senate known as a stalwart friend of grassroots conservatives.

A key consideration for candidates and grassroots activists interested in the race will be the method by which the Republican nominee will be chosen. A crowded field in a state-run open primary will benefit a candidate who can self-fund or otherwise raise significant amounts of cash. In such a race, with a fractured vote, a nominee can be chosen by a small minority of voters, as the winner is whoever has more votes than the others–not necessarily a majority. A party-run convention, on the other hand, forces a consensus candidate, as this is the only means by which a majority can be required in order to win. The epic 2007 1st District Convention to replace Rep. JoAnn Davis, who tragically died in office, is an excellent illustration of how this works.

If Dave Brat looks too tough to beat, Bill Bolling could stop by the 5th instead.

Besides, the moderates have their champion in Sheriff Wade, a man who is mentioned in “How to Bag a RINO” as volunteering to deal with a number of remaining blank ballots during a party vote. Yet, strangely enough, he wasn’t authorized to handle those ballots and he was supporting the man who was desperately trying and failing to hold onto his office in that vote.

Anybody going to parachute into the 5th?

The Republican Party has stood by hand in hand with Rick Boyer and his antics in the CCRP there fore the should have the fortitude to put him out front .
To be exclusive in what they love.

Tom Garret sounds good, Jerry Boykin sounds good, Stanley does not. And Smith is a good man who is past his political prime.

Garret or Boykin it is. Garret is young, principled, and has a long career ahead of him. Boykin is fantastic on Christian issues and has an impressive military record. Either choice would be great.

is the Family Research Council that organization that opposes gay marriage? or are they that group that supports that Duggar family?

The Family Research Council is an organization that supports a Christian, faith-based, and family-centered worldview.

Tom Garrett will make an excellent Congressman for the 5th District!

Although I will miss you as the 22nd District Senator of the Commonwealth, I prefer to call you Congressman Garrett.

he will be missed.