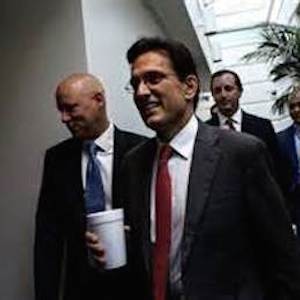 The invitation-only event was organized ostensibly as a conference to discuss how to rebuild Republican unity, win statewide elections, and grow the Republican Party, which is how the gathering was described in an article published Saturday by the Washington Post.

However, according to multiple sources who attended, the prevailing subtext of the day-long meeting at a Midlothian hotel was how to get organized to promote pro-“establishment” candidates for various party offices, starting with key local GOP committees and culminating in 2016 elections for District chairmanships and the State Central Committee. (Note: We are not a fan of the term “establishment,” but use it here in the way that it is commonly understood).

The VCN is widely regarded in GOP circles as intended to be a counterweight to Virginia’s Conservative Fellowship, a loosely affiliated caucus of pro-convention conservatives on the RPV State Central Committee. [Full disclosure: this author caucuses with the Fellowship.] The Fellowship is credited with organizing a pro-convention majority on the body in 2012. Prior to the shift of focus toward actual grassroots organizing on display Saturday, establishment reaction to the success of the conservative wing had exhibited a heavy-handed character, epitomized by last spring’s “slating” scandals spawned by the Cantor-affiliated YG Network.

Attendees at the Saturday meeting included Cantor, Comstock, and George Allen as headliners, with support from a number of elected officials and their consultants and campaign and/or legislative staffs. We are told that Boyd Marcus and Bill Bolling attended by proxy only. (That’s tongue-in-cheek, folks, in case you were wondering). 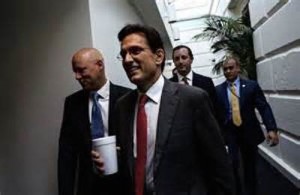 Oddly absent from the event was Rep. Dave Brat, in whose district the meeting was held. According to Brat’s office, the Congressman was not invited. Given the focus on “winning elections again” and “party unity,” it seems more than a little uncouth not to invite the guy who just wrote the book on how conservatives win elections. We suppose “unity” must have an alternate definition of which we are unaware.

And that particular concept of unity is what is troubling about this weekend’s meeting. For instance, one of the workshop sessions was entitled, “Reclaiming the Elephant.” There is a lot of meaning packed into that title, but just on the surface there is an implication that something that is rightfully theirs has been taken, and needs to be seized back. We’re sure a lot of this came with window dressing about tending to the Republican brand, etc., but underneath it all, the thing being reclaimed is simply power for its own sake. If it was truly about messaging and electoral temperament, how can one fault (and conspicuously exclude) a man who won a landslide campaigning–quite literally–on the Virginia Republican Creed?

The clear implication is that the 7th District Congressman and his ilk have stolen something, and Cantor and his gang plan to take it back (whether or not that reclamation includes a nomination fight in 2016).

For the record, we don’t think that organizing to advance your position on internal party matters is a bad thing at all. In fact, we encourage any empowerment of grassroots activists within the Republican Party, and on that basis we welcome the participation of our friends who clearly are passionate and dedicated to the cause they think is right. We are looking forward to the positive contributions of the Virginia Conservative Network, as we know there are a lot of good, talented people who are part of it.

We just hope they can do a better job on the unity bit next time.

For our readers’ edification, the text of a promo email for Saturday’s event is pasted below:

The Honorable Eric Cantor will be joining us for the