Latest Posts
Sunday Memes
The most important day of the election
Convention details for tomorrow, May 8th, and when...
Analysis and Predictions for the GOP for Saturday’s...
Wokeness begins to invade libertarian think tanks
We’re On Our Own
“Rebranding” – The Latest Euphemism for Cancel Culture

Cantor officially has no Democrat challenger, focus all on Republican Primary

Last Thursday the Democrats announced that they were cancelling their Democrat Convention (yes, you heard that right! Democrats also hold conventions. It is a common nomination method for political parties) because no Democrat filed to run against Cantor in the 7th Congressional District. 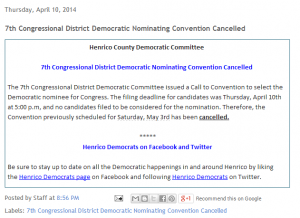 This news actually surprised many, since Mike Dickinson had announced he was running as a Democrat against Cantor. He received lots of national attention on Fox News, The Huffington Post, and other news sources when he proclaimed he was going to wage war against Fox News, NRA, the tea party and all other trash if elected to Congress.

Greta Van Susteren had Dickinson on her show last week to question his war on Fox News and other groups. It simply got embarrassing for Mr. Dickinson during the interview when he crumbled under every question. Perhaps that is why he decided at the last minute not to seek the Democrat nomination in the 7th Congressional District. I’m sure that most Democrats were relieved he did not run as well, since he was completely incapable of articulating a coherent message and he quickly admitted to straight-up lying three minutes into the interview!!!

With the Democrats failing to produce a candidate, the Republican Primary is the only race in town for the 7th Congressional District. You might think that Cantor should debate his Republican Primary opponent given all the questions raised in the national news about Cantor recently. You also might think that Cantor has an obligation to be accountable to his constituents. Well, Eric Cantor and his high-paid consultant, Ray Allen, think differently. The Times Dispatch stated in their article today:

Ray Allen, Cantor’s political strategist, said they have no intention of debating Brat.

The voters continue to ask: #WhereIsCantor? George Allen and Barbara Comstock did not avoid debates. Perhaps Cantor should take his cue from them. Or perhaps Cantor is simply scared to debate, knowing he doesn’t have sufficient answers to tough questions. Perhaps a better hashtag would be, #Cantorscared

The Republican Primary is fast approaching. You will vote at your regular voting location on Tuesday, June 10th from 6am-7pm.