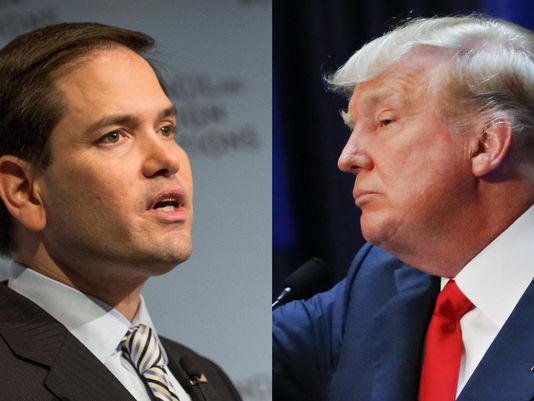 A de facto teamwork strategy appears to be emerging between the mainstream Republican candidates, Ted Cruz and Marco Rubio, to no longer let Donald Trump off the hook for some of his inconsistencies, his non-adherence to conservatism, and his general lack of substance.

Whether this strategy will prove to be too little and too late remains to be seen. But both candidates made no bones about trying to arrest the momentum of the frontrunner in last night’s GOP debate in Houston. The only shot either of them have of surviving to at least the Republican National Convention in July is for Trump to start losing primaries, and particularly those held in the winner-take-all states starting March 15.

While both Cruz and Rubio seemed to get the better of The Donald last night, Rubio was particularly combative in doing so, scoring a majority of the headlines and most of the news coverage this morning.

Recognizing that the only way to slow Trump down ahead of the winner-take-all primaries in the second half of March is to make a dent in his lead in the March 1 primary states, Rubio has turned his sights toward the Old Dominion.

In a press release this morning, the Rubio campaign announced four rallies around the state this Sunday, two days before the primary.

For those interested in seeing Cruz, the Texas Senator is appearing tonight at Regent University in Virginia Beach, starting at 7:00 PM.  Click here for details.

Say whatever you want about the unorthodox and often disconcerting presidential race this year, but it does have the benefit of highlighting Virginia’s importance in selecting our next nominee.

The next several days should be interesting, to say the least.  Buckle up.