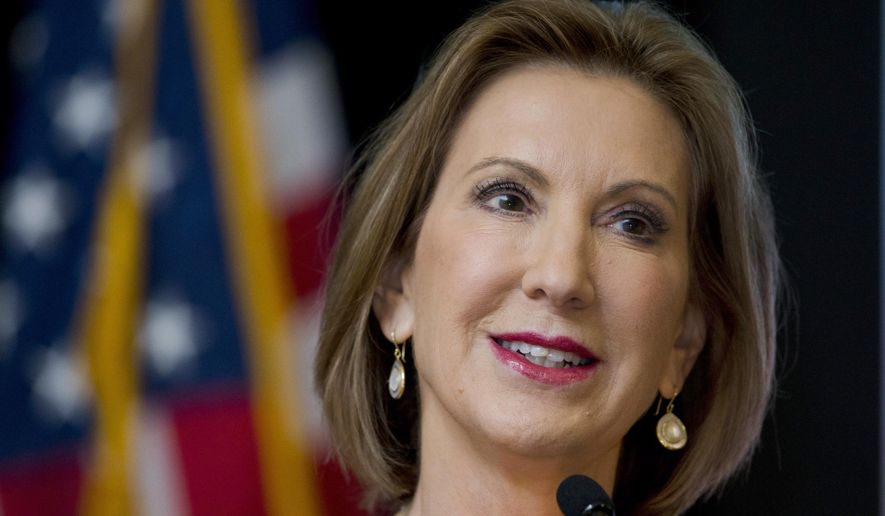 We previously reported a possible Virginia senate run by well known Laura Ingraham.  Yesterday on the John Fredericks radio show former candidate for President Carly Fiorina said she too is considering a run for Senate next year against Senator Tim Kaine. From CNN.com

Well, I don’t know yet, John. Sorry, I’m not gonna make a big announcement on your show.
“Look, I’m certainly looking at that opportunity,” she added. “It’s a little early to be making that decision, we’re two weeks into a new administration.”

We [Republicans] should be realistic that is going to be a very, very tough race,” said the former Hewlett-Packard chief executive. “Virginia is a purple state. Virginia has two Democratic senators. The Democratic Party is going to throw everything they have at defending Tim Kaine’s seat.

Republicans must keep the Senate next year. It would help Trump and his Supreme Court appointments if we could get closer to the 60 Senators needed to block any filibusters by the Senate Democrats. Tim Kaine can be beaten. Either Laura Ingraham or Carly Fiorina could do it.

This is why we lose, we focus on good candidates rather than good officeholders.

Ed Gillespie could/should have been competitive for this race. The Senate suits him and he suits the Senate.

Apparently we are so devoid of actual electable Republicans that we’ll take anyone in a futile gesture of opposition.

This is what you get when you don’t have a party that is capable of checking self-centered candidates.

Whoever our nominee is, we need to back him or her 100 percent. Any attitudes such as “I will only support candiate X for the nomination and if they don’t get it, then I will vote for Sarvis or not vote at all” will only ensure another term for Senator Kaine.

Interesting. She’d have a hard time uniting the Virginia GOP behind her, but she’d be a strong candidate.

Some trolls refuse to vote for someone no matter what. Not sure why that is – guess it makes them feel better about their pitiful lives?

I don’t think it’s that. I think a couple of folks are nursing some leftover rage from the 2016 primary. Quite frankly, I don’t want to hear that hysterical bullcrap all over again.

And the convention before that, and the primary before that. It’s what a party in the death throes does.

Party is as party does.

Because they are simple folk who can’t think beyond the binary and assume there is no “and then what?”

You may call some trolls , no matter.
I do call many R’s mere cheerleaderers with no wins for America.

I want my beloved and ancestral home of Virginia to get itself right again in statewide elections!

Regardless of who the nominees end up being in the Governor and Senate races, I expect I will be voting Republican. This is even more likely since I see promising changes being made in the GOP, which I attribute to the likes of our own Dave Brat here in the 7th, and even more so with the Trump Effect.

The more candidates the better. Kaine is a beatable candidate if the Republicans can come together in the end. Carly is very well spoken and very succinct in making points. Kaine is just another leftist idiot.

He is an idiot, and not a very smart one.

Carly is an idiot, and not a very smart one.

But, at least, Carly is mean.

He is a lot more liberal than he wants people to think, but he is not an idiot. We cannot take him lightly If we want to beat him.

Never take people like Kaine lightly. He is a senator for a good reason. He will say and do anything to get elected and that makes him dangerous and without a conscience.

We CAN do better than Kaine, will we?

The choices are endless.

The third time’s the charm?

I guess not, your correct.I personally like the man is why.
I just want to rid this country of individuals who will expand HB programs.
It is counterproductive for Americans to send their children to college for a degree establish large debt, then to have programs that allow foreigners to come here to study not incurre the same debt then take what was good pay for $15.00 an hour in tech and have welfare subsidizes.
She embodies the bold opposite qualities of my President , who believes we have failed America by not tapping into great potential that Americans have to offer.
No to the globalization of America, NO to Ms.Fiorina.
Stay gone Cantor and all of those like him.

Gilmore is also running for the seat although I don’t think he’s made it official.

How has she worked her way through the ranks of the RPVA? If she, after 5 years is better than the R candidates that have been involved in the State for the duration, that’s an indictment on them and the RPVA.

Hell, you lambasted Hills for the same kind of hopscotch crap in NY. Right or wrong on policy but she was a helluva lot more invested in that constituency than Ms Fiorina w the current state of Va

Huh? Hillary had never lived in NY. Fiorina has lived here for 6 years.

Lmao, “Clinton was actually born in Chicago, raised in the in the suburbs, attended Wellesley and Yale, moved to Little Rock, then Washington, then Chappaqua, N.Y., where she’s maintained a residence for 16 years.”. That was referenced from 2015.

That’s a helluva lot longer than the 6 yrs Ms Fiorina has been hobknobbing around the Country. I’m sure while she was spending time on the stump and at her homes in SF and DC, the best interests of Va citizens were at the top of her agenda.

Of course, compared to Bush’s Texas “roots”, she’s an oak.

God bless her though and good luck, the narrative however is laughable.

The Clintons rented an office in Harlem for 8 months lol

Fiorina, another wanna be Republican hack, and swamp dweller.
Laura Ingraham, someone of impeccable character, and strong principles for senate.

To a life long Virginian,
who lived as a child at NAS Oceania to rural Carroll County , to the fine area of Central Va. , I don’t think she has my Virginia heart.
Va. has many sites for her to see , let the sand crabs at the beach whittle away at her toes , that seat must be awarded to someone new , someone who will stand for Virginia.
Carpetbagger is harsh yet correct.

Having been born and raised in the Commonwealth of Virginia, and considering myself a Virginian first and an American second, I would be once again glad to work for Carly Fiorina.

Having said that, I am not sure who I will support, it will be either Carly or Laura Ingraham. But to be call someone a carpetbagger just because they lived somewhere else before – that’s beyond stupid.

Sorry , not a Carpetbagger of geographic residency.
I really don’t care for much at all that comes out of DC or NOVA and damn sure don’t need candidates to come live in Va. (NOVA) just to run for a seat in DC to tell the rest of Va. what we may or may not need.
Start at the bottom work your way through, your credibility will elevate your position. Much better to me than just being another R against a D.
Yea, Yea, Yea, tax cuts , deregulating, will create jobs BULL CRAP! when you turn your back and internationally outsource, then create a larger HB program.
Not in the least bit interested, I want a Statesman, a representative, Not a lobbyist, or a candidate for corporate DC.
Is this all R’s can come up with the corporate Rep.
Enon Eddy an Corporate Carly, there will be some sort of ball game to devote my attention to that day.
Turnabout is fair play.

Try that again in English please

As a IT person, and a VA person, no way Carly.
She ran HP into the ground, sold good when she wasn’t to.
Laura is better
Don’t want to lose Brat in House.

I would prefer Laura Ingraham

I agree,
Compare the two ;
Which one is more in touch with the dinner table and a household budget?
I always try this write a letter, a e-mail, then a phone call.
I bet Ms.Ingraham would return the call.
Ms.Fiorina appears of the same Republican as Eric Cantor , that means globalist and job retraining, I’ll stick with Timmy the shifter.
If there is not an old fart Va. Congressman up for it then maybe we should be checking the value in these current R Congressman, just sayin how deep is the roster?
Let’s get it together we can have great statesmanship , we’re Virginia for crying out loud.

She’s “Establishment Enron Ed” Gillespie in a skirt. “No, Hell No”.

Her and Enron Ed can both run as experienced losers.

Results ain’t gonna be no different in Virginia.

But the TV stations thank you

Good one about the TV stations $$$

No. Just NO. Go away, be happy w/your millions and leave us alone.

She lives in Virginia has has since 2011. She and Ingraham are a thousand times better than Kaine.

That’s not a useful standard. We can do better. Wittman. Brat. Cuccinelli… and that’s offhand.

she failed at HP – we already have a business failure in the WH, don’t need another one in the congress

Would be more than satisfied by either..while her record at HP has flaws, I would take a high level executive with billions in sales worldwide over a career government ‘yes man’ any day of the week