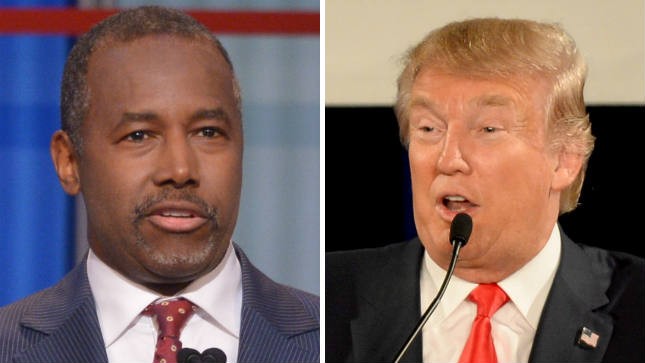 Carson and Trump Tied In Iowa

For the first time the Monmouth University Poll shows Dr. Ben Carson and Donald Trump tied in Iowa with 23% each. Â Carly Fiorina came in third place with 10% and Ted Cruz behind her at 9%. Â Governor Scott Walker continued his slide downhill, now in fifth place polling at only 7%.

Governor Bush polled even worse at only 5% and the highest unfavorable/favorable rating with 51% viewing Bush unfavorably and only 32% viewing him favorably.

John Kasich and Marco Rubio polled at 4% and Rand Paul received only 3%. Santorum and Huckabee were at 2%.

Ben Carson had the highest favorable ratings and the lowest unfavorables, 81% to 6%. Â This from the Hill.com is also interesting,

While billionaire businessman Trump leads in the poll among Tea Party conservatives and men, Carson leads among Evangelicals and women.

We know women vote in large numbers so this might be a real advantage for Carson.

Full details of the poll here.Â

Carly Fiorina's rise provides a much needed opportunity for the GOP - The Bull Elephant September 2, 2015 at 10:05 am

[…] explains the most important findings in the latest poll from Iowa, where the three non-politicians in the race (Trump, Carson, Fiorina) combine for a total of 56% of […]