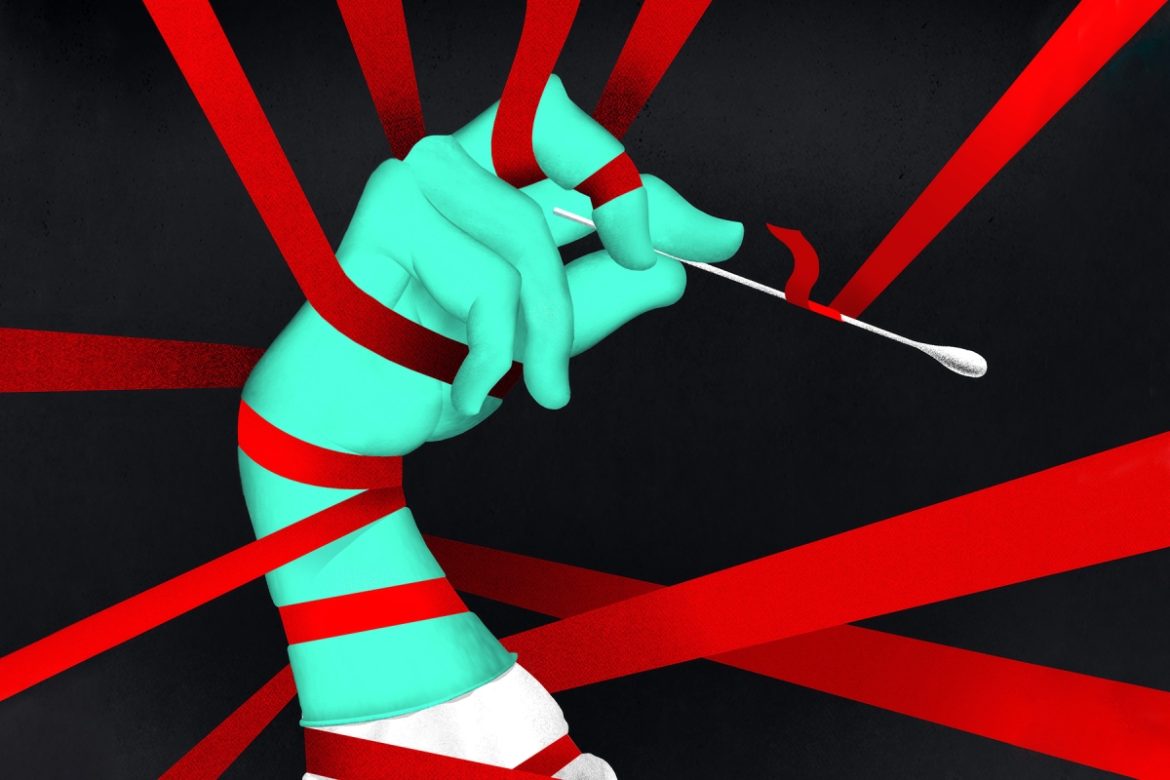 Over 700,000 Americans have died from the coronavirus. So many fewer would have died, if our country had responded faster to the disease. But it couldn’t, thanks to the federal Centers for Disease Control. It thwarted efforts to contain the virus.

“The pandemic was a test of America’s public health bureaucracy. It failed,” notes Reason Magazine’s Peter Suderman.  “Those failures were legion,” but “no institution failed quite as abysmally as the Centers for Disease Control and Prevention (CDC), which, through a combination of arrogance, incompetence, and astonishingly poor planning, wasted America’s only chance to mitigate the effects of COVID-19 before it spread widely.”

The CDC is supposed to be the federal government’s first responder to epidemics. As Suderman notes, its “job is to analyze viral threats, track their spread and development,” and inform the public about how to respond to outbreaks. Not only did the CDC “do this job poorly in the early stages of the pandemic, but it actively hindered efforts” to fight the pandemic, and “it made planning errors that were both predictable and avoidable. At nearly every stage of the pandemic, the CDC got things wrong and got in the way.” That made the pandemic much worse.

Suderman describes the CDC’s most infamous failure, early on in the pandemic, when the CDC was trying to develop a test to detect COVID-19. As a past Food and Drug Administration director, Dr. Scott Gottlieb, recounts in a blistering new book, Uncontrolled Spread, the CDC committed many blunders and errors in the process.

The Atlanta CDC laboratory charged with developing the test needlessly came up with a test kit that was more complicated than necessary, with three components rather than two, unlike the tests developed by other nations, or the CDC’s own initial version of the test. Supposedly, this change was to make the test more accurate. But the third component added by the CDC lab turned out to be contaminated, rendering the test unreliable. The risk of contamination occurred because the CDC had decided to produce the test in-house, rather than contract out the work to companies with more experience and better quality controls.

The contamination was not discovered until the CDC sent the faulty test kits to other laboratories. Even after those laboratories reported that the tests were producing obviously false results, the CDC continued to claim to the White House that the tests worked fine. Eventually, it was forced to admit it was wrong. But even then, it insisted on a slow and laborious process of updating the faulty test kits on its own, thwarting more competent non-governmental laboratories from taking over. So not only did the CDC foul things up, but it prevented other people from fixing its mistakes.

Eventually, outside contractors were brought into the process, but only after days of CDC nitpicking, designed to preserve the CDC’s total control over the process. As Gottlieb writes, the CDC “created the conditions for failure by overengineering its test for COVID and then being wedded to that more complicated design even after the problems arose.”

Meanwhile, the coronavirus was spreading like wildfire. As Suderman observes, “The testing foul-up has been widely recognized as a critical failure. What’s been less discussed” is how the CDC “was actively impeding the build-out of mass testing capacity during the pandemic’s early days—because true mass testing would have meant allowing testing that was out of the CDC’s control.”

In Spring 2020, after much of America had been locked down, the CDC edited an article that was slated for publication in a science journal, to remove a call for widespread testing at senior assisted-living facilities made by a Washington State public health official. Senior living facilities are where the coronavirus is most lethal. Yet even there, the CDC resisted mass testing, because the CDC feared it wouldn’t be able to handle the demands of “widespread testing.”

For weeks, the Centers for Disease Control and Prevention required that people use only the coronavirus test designed by the CDC itself, not alternative tests, such as those previously approved by European regulators.

As Suderman notes, widespread testing in the early days of the pandemic would have saved lives and reduced the need for costly shutdown measures that harmed the economy. Wider testing could have led to a “more tailored response, with mitigation measures limited to certain geographic regions and times.” But because we were “initially blind to the scale of the outbreak, we shut down the entire country instead, to disastrous results.” The economy went into a sharp recession, and millions of people lost their jobs.

As Suderman observes, “The CDC continued its run of failures as the pandemic proceeded. It promoted arbitrary guidelines based in shoddy science, like the rule calling for six feet of distance between people interacting indoors, which made it maddeningly difficult to reopen schools in the fall of 2020…despite months of evidence indicating that three feet was safe enough.” Shutting schools actually increased the spread of the coronavirus, while making children more obese, less healthy, and more vulnerable to COVID. The CDC’s guidelines were confusing, vague, impractical, and internally contradictory.

And the CDC’s failures couldn’t be explained by saying that only hindsight is 20-20. Experts and educated laymen figured things out much faster than the CDC. As Suderman notes, unlike the CDC, people following “public debates about COVID-19 were reasonably well-informed throughout the process, understanding quickly that it was spread through aerosols, that ventilation was much more important than physical distance, that unmasked outside activity was basically safe, that schools could safely reopen in 2020 with some reasonable precautions. The CDC’s pronouncements, meanwhile,” were “sometimes badly wrong, sometimes just muddled—and almost always far too late.”

Other federal agencies like the FDA also slowed America’s response to the virus. For example, the FDA caused coronavirus testing delays, by refusing to approve infectious disease expert Helen Chu’s test on the grounds that her lab “was not certified as a clinical laboratory under regulations established by the Centers for Medicare & Medicaid Services, a process that could take months.”

Thanks to FDA regulations, coronavirus tests are more expensive (at least $10-15 per test) and less available in the U.S. than in other countries, like England, Canada, and Germany. As NBC reports, “Consumers elsewhere have much cheaper — or free — options. In Germany, grocery stores sell rapid tests for under $1 apiece….More than 30 antigen tests have been developed in the U.S. — but just six companies have authorization from the Food and Drug Administration for over-the-counter use. No rapid tests have full FDA approval.” By contrast, “In Germany, regulators have given special authorization to dozens of antigen tests.”

“Even young victims struggled to recover once on a ventillator.” No shit, Sherlock………..that is cos they were dying

Clearly redcaps will believe anything they read.

The failure of the testing is well documented dumbass. Guess you don’t go much beyond watching Rachel Madcow on MSNBC.

Mr Bader, as the commenter Truth says below, you should read the article by Spartacus on the internet. It may be found at Zero Hedge for one place.

It’s Fauci’s fault. Your comments are fit for print… to be placed on the bottom of a bird cage.

can you be more absurd?

Yes… the NIH funds gain of function at a Chinese lab… Then it screws up every possible way in responding to something that that scroungy little turd Fauci knew damn well about. Truth mentions the Spartacus Letter. Spartacus describes the back channel communictions that occured between all of the principals of the disaster. Wuhan… Daszak… the UNC lab… the French who built that damn Chinese lab.

It is akin to the 9/11 disaster… We spend hundreds of billions on “homeland” defense. HAHAHAHAH.. you can cross the F..ing border at will… but it failed to see the plot, even when they had captured one of the plotters..

The bureaucracy is pretty incompetent these days… And is anyone ever held accountable? Was Fauci fired for his role in this virus and subsequent screws up as described in the article… Was anyone in the FBI fired for not following up on the obvious problem of having people wanting to fly planes but not land them in flight schools? Nope. So you get what you pay for… billions for nothing

I suggest everyone read “covid 19 – the Spartacus letter”.

Yes it was interesting reading. I am not qualified to really understand the long discussion of the biology of the disease as it effects the body. The discussion of ventilators was pretty interesting. That was a screw up. The ventillator was the wrong treatment. That was obvious. Even young victims struggled to recover once on a ventillator. Then you had the damning passages about funding this virus by Fauci and company… Outsourcing gain of function to a Chinese lab?
INCREDIBLE… and likely it was done in a P2 lab… in a country known for its industrial accidents and lack of concern about it. That’s why all those global companies make their products there… cheaper to not give a rat’s butt about safety or anything else.
Fauci should be tried and jailed… but nope.
Well it is great reading… long but great.

I read it twice. It doesn’t get less concerning the second time around. It is clearly written by very knowledgeable individuals who are deep into both the research and practice of virology and, I suspect, bioweapons as well. This is devastating.