Chaos of McDonnell Trial Likely to Lead to Tainted Testimony

In keeping with the speedy reputation of the court the McDonnell trial has progressed past Jury selection and opening statements and witnesses have started to take the stand. 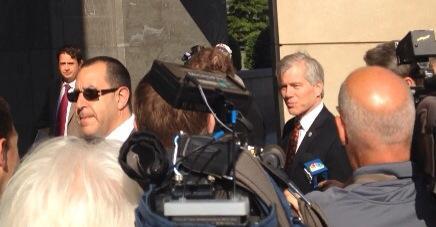 Already there are signs that much of the witness testimony will be tainted by the time many of the remaining witnesses take the stand.

Drama from the witness stand

CBS6 television reporter Joe St. George is (nearly) live-tweeting the trial and reports to us this afternoon that the prosecution’s second witness, Cailin McDonnell Young broke down in tears on the stand.Â  Shortly thereafter St. George relates this fact to Chris Young, Cailinâ€™s husband, out in the hallway where he was waiting to testify, and that Mr. Young looked concerned.

How is Chris Young going to testify now that he knows this?

Purpose of a rule on witnesses

The purpose of the rule on witnesses is to assure the most honest and complete testimony from each witness by limiting false memories (fabrications), lies, and omissions from witnessâ€™ testimony.

I cannot find a reporter that acknowledges a rule on witnesses was issued, but I also cannot imagine a situation like this in which one would not be issued.

Policing a rule on witnesses will be nearly impossible

This trial is set to last over a month.Â  There are over 100 witnesses.Â  Most of the defense witnesses are not required to appear until mid August.Â  Not having appeared, arguably those witnesses are not subject to a rule on witnesses until they do appear and are ordered by Judge Spencer.Â  Media coverage will remain significant week after week and the vast majority of witnesses are involved politically and avid consumers of news.Â  In this case we will likely have dozens of witnesses who will have knowledge of prior proceedings before entering the courtroom.

There are a few possibilities that could result from numerous witnesses having been tainted.Â  In the most extreme (and unlikely) circumstances a mistrial will be declared.Â  If we are very lucky, counsel will ignore the fact that witnesses may be aware of the nature of proceedings by the time they arrive on the stand.Â  The most likely scenario is that witnesses will begin to be questioned on the stand about what they understand is the nature of the trial so far, and how that makes them feel.Â  Wow, will that be boring.

And yes, prosecutors made a young bride cry about her wedding day.

Chaos of McDonnell Trial Likely to Lead to Tainted Testimony was last modified: July 29th, 2014 by Paul A. Prados

I would suggest that conservative blogs don’t get wrapped up too much in this soap opera that is in part why the Administration brought you this prosecution rather than opening up a criminal investigation into something perhaps more troubling i.e., Dem Political Hack Lois Lerner’s using the IRS to target conservative groups. Did you know “a**whole conservatives” are more a threat to national security than illegal alien terrorists? Well you do now:

Why doesn’t somebody talk about something that would help the middle class? Example, why should an automotive manufacturer be held accountable for recalls any longer than the warranty period on the automobile they manufacture? Do you really think that these millions and millions and millions of automobiles that are being re called are being recalled at the manufactures expense? The cost of these recalls, every penny, will be passed on to the consumer in the form of higher prices in the future. Higher-priced cars will mean higher taxes and higher insurance premiums. Cars will become unaffordable for the average working-class. For neither political party to take advantage of this and score political points by repairing this type situation is absolutely stupid. Why should any manufacturer be held accountable for a 15 year old automobile?

Hey Jim I see you are tracking the WH talking points and trip for the day – the middle class. I was just reading Congressman Cleaver D- KC recent tweet from the President’s trip to KC the other day, great stuff – promoting the middle class. Since you are so interested in corrupt politicians and their spouses and their impact on the average American, I highly recommend the KC area.

I just read the tweets , and I see a you a lot of talk but frankly I don’t see any ideas from the man just more talk and a joy ride on Air Force One. If he has got ideas for the middle class I like to know what they are, talk is cheap. It seems South Carolina and Tennessee have done very well in attracting manufacturing jobs. However the cost has been high to attract these companies but it’s still worth it in my opinion.

Doug,
I understand your point.
Writers at TheBullElephant have specific Virginia political knowledge and readership. The McDonnell trial is already being covered by the mainstream media. I have tried in a these few posts to raise issues beyond the soap opera, and increase public knowledge of what all of this means in a practical legal sense. I went through yesterday’s trial exhibits this morning. There are items of consequence being missed by reporters in the documents. This means the public is only getting a partial story. The conservative media can supplement the public’s understanding, and this is a worthwhile goal.

Sad to see so-called “Conservatives” excuse this Establishment big-government tax and spend politician. He turned into everything that’s wrong with politics in America and all we keep hearing about are excuses for him.

but Paul, your point is a good one. & you are right–policing it would be close to impossible.

Does anybody know if all the seats are taken?

I know your comment is meant in a snarky manner, BUT
Judge Spencer’s courtroom is probably the largest courtroom I have been in. Still, given the number of people reporting on this case I would not be surprised if they have or are considering setting up an overflow viewing room with a closed live feed.

No, no snark intended. I do appreciate your response. I just don’t have the time to waste if there are no seats available. I’ve never been to anything like this and thought if I could get a seat I may go down there and watch how something like this proceeds. Thank you again for your response.

I apologize for the presumption of snark.
You may want to call the clerks office to ask if there is plenty of space for spectators or if they set up an overflow room.

the witnesses will be sworn. any trial lawyer worth their salt can smell waffling. any trial that last this long has the same problem. for witnesses & jurors

What does that mean? What’s the result?

well, depending on how bad it gets, Spencer could do anything from close the proceedings to declare a mis-trial. But kelley is right. Hell, I know reporters who can smell waffling. I don’t know too many folks who are willing to purger themselves.

I think it will be interesting to see if any deposed witnesses attempt to alter testimony.
When I first read the first article, I thought to myself that it felt like Maureen and Johnnie had something goin on.

All in all, this might just be uglier than anyone predicted.

It sounds like Maureen and Jonnie had an emotional affair if not a physical affair. The defense is saying she was enamored of him but they have not said it was sexual. Who knows? It’s certainly a unique defense.

I agree it’s a unique defense. It’s also a very clever one, providing an avenue for Bobs attys to say he did not know anything. Sad.

Judge Spencer will want to keep the testimony focused on the facts of the case. Discussions about what a witness has heard in the news or from other witnesses are likely to be held outside the presence of the jury. Judge Spencer will be loathe to constantly dismiss the jury and then bring them back in in the middle of questioning or hold excessive sidebars. This will get progressively worse over the next few weeks. I do not understand the propensity in federal cases to have these long trials.

maybe because these circuits are not short of judges?