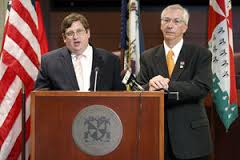 Long time Republican activist, Leesburg attorney Charles King, has filed a Statement of Intent to Run next year against Scott York for Chairman of the Loudoun County Board of Supervisors.[read_more] The statement was filed with the Loudoun Registrar. His formal announcement to challenge sometime Republican Scott York for Chairman will come in January.

Charlie King has been active in Loudoun County Republican committee for years. He has defended many republicans in Loudoun courts including Delegate David Ramadan and Supervisor Eugene Delgaudio. He is a solid conservative Republican who I expect many Loudoun Republicans will support. We look forward to his campaign.

More details in the New Year.