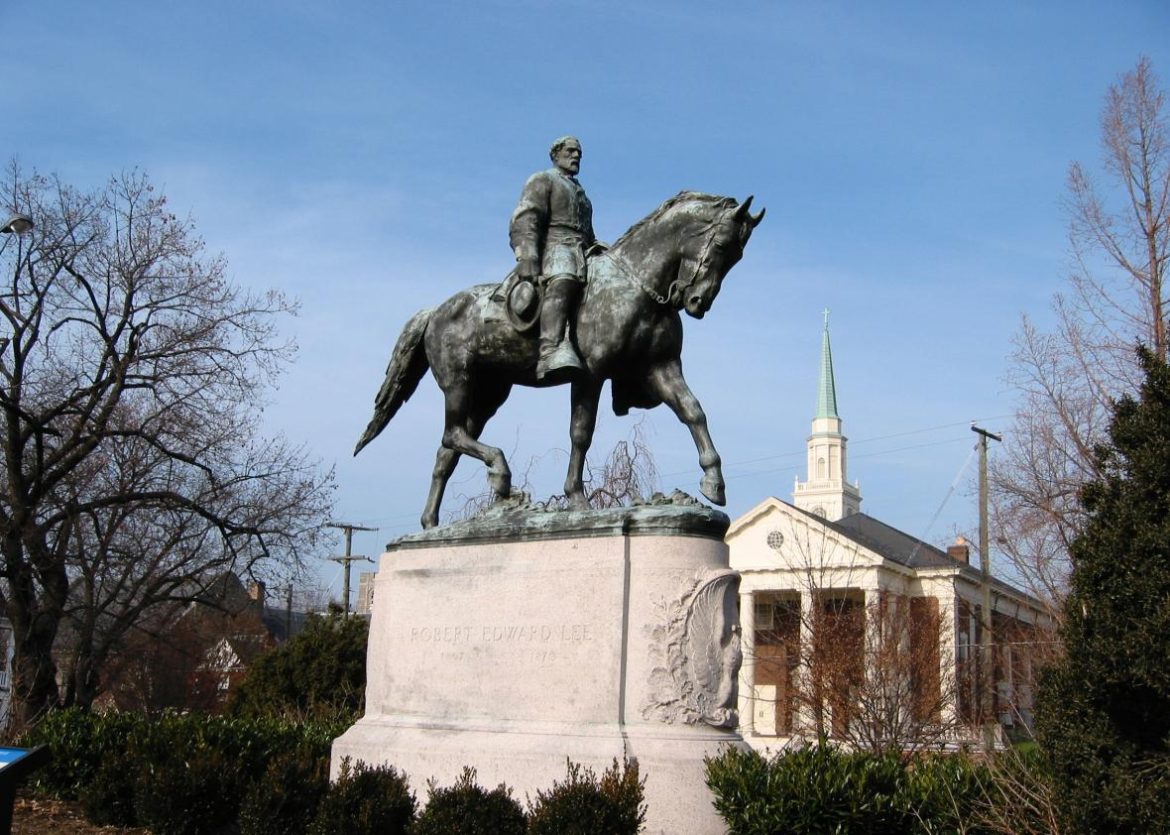 The Robert E. Lee statue in Charlottesville, Virginia, is pictured in this Jan. 10, 2006, photo.

Weeks after publishing a piece on Gubernatorial candidate Corey Stewart’s problem with White Nationalists in Virginia, liberal fascists out of Charlottesville, Virginia have taken it upon themselves to threaten/harass Jason Kessler, who was mentioned a couple of times in that article.

Supporters of the Lee Monument have found themselves harassed as well.

While I am antagonistic to White Nationalism, protectionism, populism, and white-identity politics, these videos are a reminder that we have serious issues with anti-American, anti-Free Speech fascists on the left as well. Video’s like these will likely encourage angry white Americans to rally to the white-identity politics cause, as they respond to the ever increasing incidence of black, female, queer, and Hispanic identity-politics on the left.

Identity politics leads to violence, discord, and dissension throughout our culture. While I would caution the left to cease and desist their promotion of collectivist and identity-based political strategies, I want to point out to Republicans and folks on the right that by participating in this kind of behavior, you will appear no better, no wiser, no more credible or mature than these leftists harassing Jason Kessler in Charlottesville, Virginia.

The videos above testify to a new America, a terrifying America, an anti-American America. Apparently there were members of the Charlottesville government in attendance as well. While this is unconfirmed, it would not be surprising. This is a city where antagonism for American history has led to antagonism against Americans. Hate from the left has bred hate on the right. Hate on the right fuels the hatred on the left.

No one was injured in these videos. But how long can we expect that to last? How long before the city of Charlottesville erupts with violence?

Anyone looking to be associated with the Republican Party of Virginia needs to accept a color blind attitude, where we stand up for natural law, inalienable rights, the Constitution of the United States of America, Federalism, Republicanism, and centuries of Conservative Tradition.

We Republicans have nothing to apologize for – in fact, we should be asking the Democrats why they are so intent on whitewashing their own history? Why have they abandoned the values found in our inner city’s black churches? Why do they take African-American Christian’s votes for granted? Why are they tearing down monuments?

Someone needs to step up. Violence will be the inevitable result of what we see in Charlottesville today.

Great conversation.
Remember
As long as multicultural and diversity
A long myth read Peter Woods.
Are a part of a daily diet. WHITE
People will need to by all means defend their heritage as well.its just common sense. Many white people bought into white guilt. Which oa a total joke. If you eliminate history
You eliminate your culture. Then your on the roads to a new civil war.

White nationalists? Why should we feels sorry that Klansman and skinheads are distepected? They deserve none.

Let me assure you, Charlottesville City Council member, Wes Bellamy WAS and is a part of the anti-fascist mob who stalk and physically assault people.

While it may feel high and noble to affect the above-the-fray, everybody get along narrative, it’s madness to ignore the reality. Black supremacists/white-guilt fascists are the bully aggressors here. THEY are the ones committing CRIMES with impunity, and the city liberal cops allow it/look the other way. Stop aiding the liberals by pretending otherwise.

Please see my report above.

Your analysis has validity in part but fails greatly to analyze thoroughly.

Your analysis offers NO remedies or solutions. Just like the stalemate in Congress …. even with a majority in both Houses.

ONLY if a third party of American practical common sense – WITHOUT the 400 years history of White Supremacy (which you cannot deny unless you’re addicted to reality altering substances or possessed of the Devil who created White Supremacy!) – can become a majority voting bloc can we see a good way forward.

Please tell me the steps to ensure that White Supremacy is to be expunged from this third party.

People stop addiction by 1. recognizing its unhealthy control over their lives, 2. finding helpful others – pastor/priest/imam/counselor/support group/doctor/therapy/etc – who walk with them into recovery, including reminding them of the unhealthy reality of addiction, 3. find a way to sustain recovery. Similarly , with White Supremacy ideology, or any other ideology that captures and takes unhealthy control of the body, mind, soul. The behaviors identified in the article are very much like the ir-rational, unhealthy emotionally-drive, un-reality/self-centered reality that we see in persons with addictions. Perhaps prejudices are a sort of addiction?

First of all, I am not a White Supremacist. God knows, the people of East Asia are smarter than White people when it comes to survival and group preservation. Just how many impoverished, nearly impossible-to-assimilate third worlders are they letting into their countries?. The answer? NONE. On the other hand, contemporary whites – particularly in Western Europe – have to rank among the stupidest and reckless people on the planet. Importing people who are much more likely to commit crime, go on welfare, and enmasse grab a white woman by the buttocks and vagina. No, I am not a White Supremacist. Any group of people who listen to the psychobabble bullshit that you are selling cannot be called superior. And sadly, many do listen. White guilt mongering totalitiarians are reigning supreme on many of our college campuses.

One reason why I am a populist because I know why the real owners of America advocate identity politics. You see, while everyone is fighting over Confederate statues, bathrooms, and safe spaces, no one is focused on the owner class that has long controlled the Federal Reserve, the major banks, the Democratic Party and, of course, the media, to include the major publishing houses. These owners have long thrown the middle class over board, shipped jobs overseas, and imported millions and million of low-skilled, semi-literate, Third Worlders from south of our border who are easily manipulated. Thus, to cover up their foul work and to continue to seize and maintain as much power as it can, then this teeny tiny elite must play the ruthless and deadly game of divide and conquer, in other words, identity politics. And guys like you, Steve, simply don’t get it.

Jeanene deleted my comments but she lets spam like this stay???

FOR YEARS many of us in the Charlottesville area have declared the past several iterations of Charlottesville City Council to be manipulating public attention toward a succession of DISTRACTIONS from their many dangerous failures. I have, on my own, championed the phrase ‘Council’s dangerous failures’ hundreds of times and have seen that some others have now taken it up as a social meme. Currently the Socialists in Charlottesville are doing a better job of defining real issues beyond distraction while Republicans/TEA Party are mute or pointless. SO, your analysis is certainly true in one sense – the Democratic Party identity politics has turned into a distraction for failures BUT you have not adequately analyzed the Republican Party’s SIMILAR failure by its own distracting focus on identity politics from another side that began with the ‘Moral Majority’ influence in the 1980s-90s, and continues today with anti-gay and anti-trans identity politics, and playing around with anti-immigrant nativism, anti-Constitutional authoritarianism, and coddling people into believing that they don’t need to compete with the world, with robotics, with new science.

The Va. TEA Party is a bad joke. Watch these non-governmental growth Republicans vote in support of Delegate Minchews bill
HB253. This bill MANDATES
that you purchase Workers compensation insurance prior to obtaining a Va. Building Contractors license from DPOR.
Va. Law does not require workers comp insurance with 2 or less employees. Republicans mandate the purchase of insurance?
( Obamaesque )
If this is to protect the employee, how come this bill does not require the applicant file and obtain a VEC Account?
Mandated Commerce by Republicans, the Tea party against Goverment growth, ha ha ha , Yea right.

“Anti-immigrant nativism.” Hmmm. I guess if you want (a) border control, (b) immigration control to ensure people who break our immigration laws are punished and deported, and (c) steps to ensure that SOME immigrants do not suck off our welfare system then that makes you an “anti-immigrant nativist.” C’mon, Edward, you make a lot of sense sometimes, but can you not agree that not all immigrants are the same, and that immigrants from say India by and large do not form gangs and do not suck off of our welfare system, while immigrants from Central America are much more likely to????? Or are you a radical egalitarian with his head stuck in the sand?

I always make common sense because God gave that to me. Immigration, to any country, does, of course, require rational, evidence-driven policy making. ‘Nativism’ is an anti-rational, emotions-driven, typically prejudice-driven way to make policy.

So you ALWAYS make common sense? Wow. Talk about hubris. See, Edward what you call nativism, I call a REACTION to the irrational and insane immigration policy that we have had for the past 30 years. So, what is nativism to YOU, is evidence-driven policy advocacy to ME. And make no mistake about it – our immigration policy is insane.

I just responded to your other thingee – touching upon uses of Confucian and Buddhist moral-cultural foundations, Judeo-Christian moral-cultural traditions can be a very rational wisdom but many streams of those traditions resort to ignorant, prejudiced tribal bigotry, utterly contrary to the Biblical teachings about God’s will that we be ‘wise’ as God is wise (e.g. treating all as part of God’s one family, treating all creation as holy beings that God created, treating all people with equal dignity, etc). So, yes, the Orientals – with Confucian and Buddhist moral-cultural foundations of social construction do – AS YOU SAY – appear to much better at many critical public policy issues. But we, and other Occidentals – cannot abandon our Judeo-Christian moral traditions in the present moment. WE COULD, however, live up to the GODLY WISDOM in the Bible and the traditions (as cited above).

Corey Stewart for Governor
The only Republican choice

Not really Wagner is also good

Wagner ?
He had an Opportunity at LU Debate to mop the floor with Gillespie on his DPOR Regulation cuts to add jobs.
He had a golden chance to show voters that Ed don’t know anything about the exploitation of illegal aliens employeed illegally costing Va. jobs.
EO24 , What would Frank the Tank look for in Employee Misclassification legislation that our next Governor will sign?
EO24 is good, would Frank look at this?

Steve does not get it and I wonder if he ever will. And this, among other reasons, is why I don’t spend too much time anymore at TBE.

I much admire your thread and what you say needs saying.