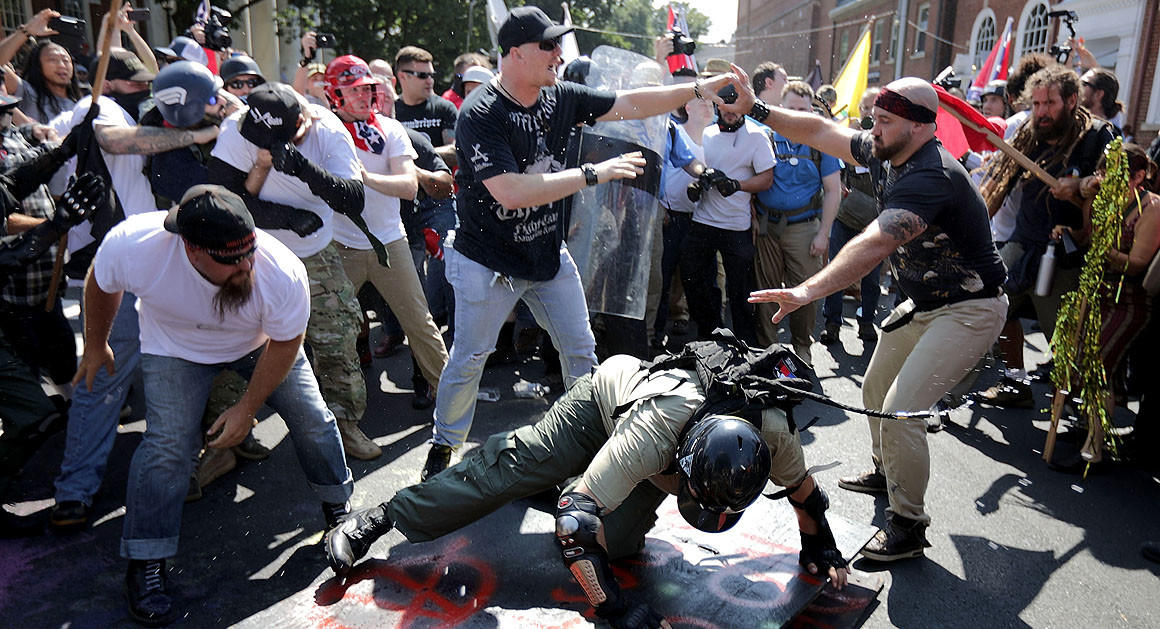 The controversy over the Robert E. Lee statue in Charlottesville that led indirectly to the tragic death of an anti-Nazi protester and two state troopers probably never would have occurred had the city’s liberal Mayor and Council just stayed out of it, considering state law prohibiting moving statues and monuments.

This chain of unfortunate events in this city of 45,000, home to Thomas Jefferson’s University of Virginia, could wind up hurting the city.  But it also has hurt our party, as a number of GOP national and state leaders have felt compelled to play defense on charges there is some large neo-Nazi/alt-right element in our party.  It has hurt President Trump, whose words in the aftermath of the rally were not well thought out and are haunting his legislative initiatives.

The incident has also put our statewide candidates and a number of House of Delegate candidates in swing districts on defense in this 2017 campaign.  And, around Virginia and the nation, there are extremist efforts to rid the landscape of “offensive monuments,” including statues of Jesus and Mary at Catholic schools.

But according to this timeline I created, while the media and GOP establishment chose to blame the white nationalists for what happened, much of this was started and prolonged by Charlottesville’s Mayor and Council, who ignored their own blue ribbon “statue commission” recommendations, their own city attorney’s advice about legalities, and even the warnings of anti-Confederacy monument activists about potential violence at pro-statue Unite rallies.

But this is a lopsidedly Democratic city.  Hillary Clinton garnered 80% of Charlottesville’s votes. Turnout in the most recent Council election was about 38%, about 10,000 votes cast total.  This means if 200 people show up in your chambers to ask for a statue to be removed, more than likely if you don’t vote to remove it—despite the legal and public safety ramifications—you could lose 200 votes in the next election, which could be decisive.

Now, in Leesburg, where I live, Democrats, County Board Chair Phyllis Randall, Leesburg Supervisor Kristen Umstattd, and Sterling Supervisor Koran Saines are potentially repeating Charlottesville by seeking legislation to allow the County to remove a Confederate soldier statue that has stood on the courthouse lawn since the early 1900s to honor the Civil War veterans cemetery at Balls Bluff Battlefield, some four miles away.   A Republican supervisor, Ron Meyer, also supports this, which means they need just one more vote on the nine-member board to get what they want—and to potentially invite trouble in my community.

They are largely being goaded on by the president of the local NAACP, who has a lot of supporters in his group and the Democratic Party, and they are playing the role of Charlottesville left-wing anti-Confederate activists, who spurred their Council to act.

This is happening despite the fact the Supervisor board on which I served in 2015 pledged $50,000 to build a slave memorial to “balance” the Confederate statue. Please read my letter to the  Loudoun Times.  Obviously, local Democrats and NAACP see more political gain in removing monuments than building new ones.  Already, the statue in Leesburg has been vandalized.

I’ve seen what happens when local government can’t leave well-enough alone and feel they must respond to a select constituency.  Prior to my first election to the Leesburg Town Council in 2006, the Council voted in closed-session to tear down gateway signs of civic clubs like the Kiwanis and Rotary to prevent the Sons of Confederate Veterans from posting their shield, which has the Confederate battle flag.   This was very divisive.

I also saw division and angst about whether the nativity scene should be on the Old Courthouse lawn after a Board of Supervisors committee voted to keep it off in 2009.  This led to three seasons where all groups were allowed to put up displays, including a crucified skeleton in Santa outfit, thus leading our all-Republican board in 2012 to devise a compromise, whereby the county placed a crèche, menorah, Santa, and of course, a Christmas tree.

Again, government and politicians can take a small protest and turn it into a toxic event for their political benefit, losing sight of the long-term consequences for their communities.

But even if every Confederate statue were removed; every street, park or school named for a Confederate general or leader changed, would that get rid of racism or the Klan and Neo-Nazis? I don’t think so.

I guess the Democrats, recognizing they have no game plan in Richmond or Washington, obviously think this issue will help them in the November statewide elections.  But did the “Black Lives Matter” brouhaha over police shootings of unarmed black men help Democrats win in the 2014 and 2016 elections?  Not at all.  If anything, the African American vote was lower in 2014 and 2016 vs. Obama’s 2008 and 2012 elections, which is why Republicans control Congress and the White House.

Perhaps Republican candidates would do well to not just stand up for Confederate monuments, but propose solutions, which myself and GOP colleague and friend, Geary Higgins, reminded readers of the “Loudoun Times” last month – don’t subtract memorials, but add context and memorials to the slaves.  Others also have proposed plaques at each site to put the statues in historic context.  There are some 112 monuments in Virginia that honor Confederate generals, leaders and veterans, and countless numbers of schools, public buildings, parks and roads named for them.

Perhaps the Gillespie/Vogel/Adams ticket, along with GOP leaders in the House of Delegates, can work with our Republican members of Congress, to investigate the feasibility of a federal/state fund for to localities to match with their money to build slave memorials or add “context” to these statues.

And given the frenzy around the nation to vandalize other statues, perhaps it should be a federal crime to deface a monument.  But hopefully, we can get back to tackling serious issues, like taxes, spending, jobs, transportation, schools, healthcare and public safety.

The local Democrats here in Leesburg are grasping at straws but, as Ken said, Democrats are adrift and have no real purpose other than to whine and cause problems. As noted also, Democrats aren’t winning anything. You’d think they’d change their issues or tactics but the brainwashing apparently prevents them from thinking.

You might amend that to: Democrats aren’t winning anything but an alliance with Trump that seems to elude the party Trump heads. Surely their work to fund the govt is a sign of the very division many here point to, and others here cause.

1. made the process troublesome, conflictual, and dangerous for governance
2. because some Councilors were using it as a distraction from manifold other failures of governance
3, and City Manager was not adequately informing the public process with reference to law, options, and opportunities for concord

The statues – in Charlottesville City public parks/forums should be moved respectfully.

The elected government should decide and be settled with their decision. If you don’t like their decision a. sue them, b. don’t vote for them next time c. raise up alternative candidates.

That process is called ‘rule of law’. Everyone – of all political parties – should honor and work through ‘rule of law’

You’re right. It is a distraction. If a politician can’t get results on police, schools, services, zoning, etc., he or she takes on wedge and symbolic issues like this. And in the timeline, i was trying to show how they prolonged the process. i now hear there will be another Unite the Right rally — in Charlottesville, of course!

This WaPo article confirms my view of the 8/12 events, having watched hours of recorded livestreams:

Intelligent and well-written. Folks like you, Steve Albertson, Steven Brodie Tucker — you make this place worth reading. Thank you. P.S. I’m referring to the text — the graphic is flat out weird and disturbing, but then there’s no image of Hillary Clinton that I find comforting.

Many thanks for the graphics change!

Reply
Timeline of the Confederate monuments controversy in Charlottesville, VA – The Bull Elephant September 6, 2017 at 5:42 pm