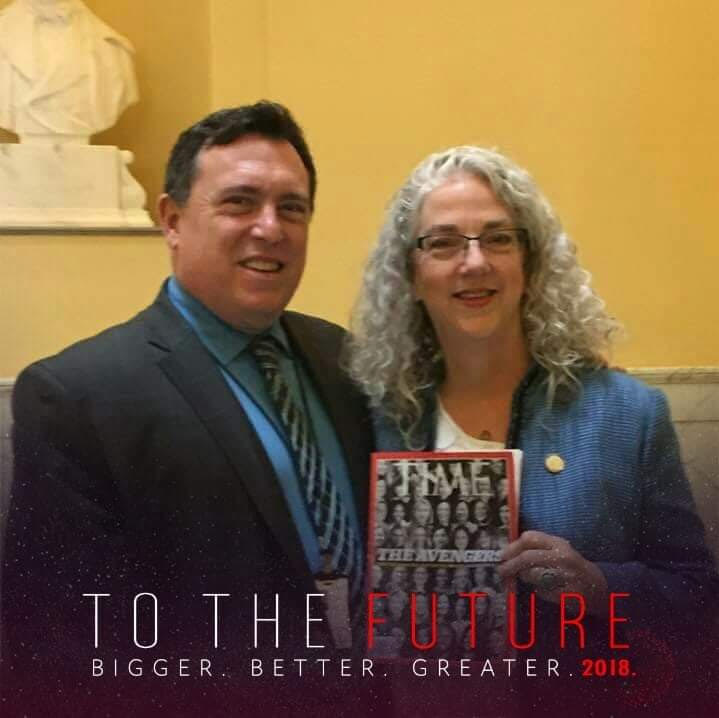 written by Guest Contributor Dylan Lloyd January 31, 2018
When I was a teen growing up in what seems now like the Cretaceous time period, I had no idea what I wanted to do with my life. Stuntman was somehow a viable option at that point.  Enter my 9th grade geography teacher, Mr. Melito. I got a gig on the school yearbook, I was paid in Funions and orange soda. I went on to major in journalism and the rest is really boring and irrelevant history.
As I write this today, I am actually struggling to type as my fingers are wobbling with shock and awe. You ever hear something from the internet and it just sounds so ridiculous or far out there, you pass it off as urban legend? One urban legend came true for me today, as I witnessed one of the nastiest campaign flyers I have ever seen. (See below) 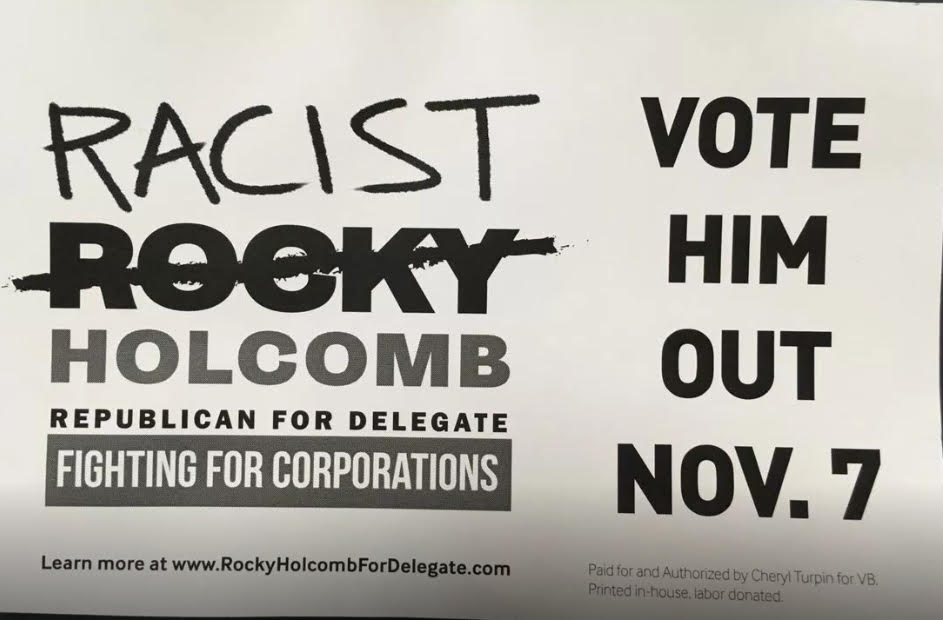 Now forget the fact that the Godfather to his children is Black or he worked in a sheriff’s office that increased minority hiring by 20%, just let the presentation sink in. RACIST (Rocky) HOLCOMBE.
The left isn’t even throwing out veiled insinuations anymore. They are just straight up calling this man a racist with nothing more than their own bluster and yearning for votes to go on. Not to throw labels out myself, let’s be clear: Cheryl Turpin is a far left radical. She is endorsed by abortion-on-demand advocates NARAL, an uber-progressive group known as “Virginia’s List” and is an Alexandria, VA transplant and aparatchick of the teachers union.
This ‘Virginia’s List’ group is an interesting bunch. Their mission statement is to get more progressive women in power in VA government. They then go on to bemoan the fact that no woman has held statewide office since Mary Sue Terry in 1993. Of course not a peep of support, or even an olive branch was extended to Jill Vogel.
Their endorsement came after this ugly flier was distributed to Virginia Beach and Chesapeake Residents, so I suppose for progressives, the ends justify the means. Perhaps they should call themselves “California’s List” being as how nearly one-third of Turpin’s donations came from wealthy out-of-state liberals, whereas most of Mr. Holcomb’s came from within the district. Looking statewide, as Rocky got a majority of his take between the 85th and Richmond, Turpin reeled in a whopper of 2% of her total funding from the actual district she was going to represent.
To add insult to injury, as reported by one of our fellow VA blogosphere gurus, Turpin is pushing for a (get this) ‘Hate Crime Bill.’ So she can spread hate through false attacks but feels she’s an impartial arbiter of love? She also has a bill calling for the state to take on privately controlled leases on oyster beds, and the rest of her goddledygook is focused on…you guessed it again  (man, I love a smart audience) TEACHERS UNIONS.
Back to my trite prologue concerning my 9th grade Geography teacher.  He was a jovial character in high school,  and most the students loved him. When I moved back to Virginia Beach in 2009, I noticed he was on Facebook so I sent a friend request.  Come to find out, Mr. Melito had a “new job.” He had become a lobbyist for the NEA of Virginia. His political leanings, about which I wouldn’t have have given a flying flip in 1994, were now on full display. I would politely debate some of the things he posted time to time, keeping my responses respectable and non-confrontational. So what does Dominic Melito do? Like any good leftist, he…you guessed it, BLOCKED ME.
Today Dominic Melito is Vice President of the Virginia NEA and he still teaches your children on the side. Dominic Melito is also a northern transplant, hailing from the high-tax unionized state of New York.  He can be seen hugging up with his HOD mouthpiece Mrs. Cheryl Turpin atop this article. It is also her Facebook profile pic, and as she has yet to block me…
This is the left. Block dissent, play ugly racial politics, and throw anti-intellectual feces at the wall to see what sticks. I ask anyone reading this to sign the petition asking Cheryl Turpin to apologize, as now any good person who has the will and ambition to better the world around them is subject to slander without recourse.
Cheryl Turpin is a DISGRACE to the 85th District and Should Apologize on Camera was last modified: January 31st, 2018 by Guest Contributor Dylan Lloyd

Dude, you rant and rave about racism in America, but did you ask any minorities how they felt about Turpin’s literature or Rocky’s mailer? Your piece doesn’t cite any such conversations, so I’m sure you didn’t. When I got the racist mailer that Rocky sent out, I shared with with a dozen minority friends in the Beach. They were all disgusted. As a person of color, I felt my stomach turn when I saw the disgusting mailer Rocky himself sent. He sent a racist ad, so he should learn to pay the price for it. Maybe you should do more research next time.

SPECIFICALLY, what was racist about his literature? It has become “easy pickins” for liberals to attack conservatives with the R word, when it is precisely liberals who ignore the racists within their own ranks. Blacks, for example, the core constituency of the Democratic Party, according to FBI hate crime stats, commit 24% of hate crimes nationwide even though they are only 13% of the population. Quite honestly, I am also appalled at liberals for saying all whites have some sort of “white privilege.” White privilege? Yeah, sure. My arse. If my last name had been Gonzalez instead of Jawsz I could have gotten a free ride at just about any Ivy League School, given my SAT scores.

You and all your leftist friends took a vote and decided the Republican was racist? Well I guess that settles it.

Maybe the literature was racist, but is it too much trouble to show the evidence and explain how? I’d like to understand what today’s Dems are claiming is “disgusting” and “stomach turning” racism. Or is it racist to even ask the question?

You do realize that most people on this site think the Cretaceous is fictional, don’t you?

You should ask Mr. Holcomb to apologize for claiming Ms. Turpin wants rapists freely roaming the streets in his campaign. If dude can’t take dirty politics he shouldn’t have played them first.

Second, Turpin has a track record of not blocking people who disagree with her. Take John Mapes who is always running his mouth on her page and hasn’t been blocked. Compare that to Former Delagate Homcomb’s Official account that blocked so many people they started a Facebook page called Rocky Holcomb Blocked and Banned.

Finally y’all need to stop being snowflakes like that child predator Roy Moore. Holcomb should just enjoy his retirement and run in 2019. If you and Holcomb keep talking about this y’all just look like sore losers.

Dylan,
When you are blocked, smile inside.
Debate is good for all. The one who fails to debate has another agenda probably a check to endorse) and you are not part of it.
People are good Politicians stink!

More Republicans need to start throwing it back at them like Trump has done. Why do you think Romney lost?