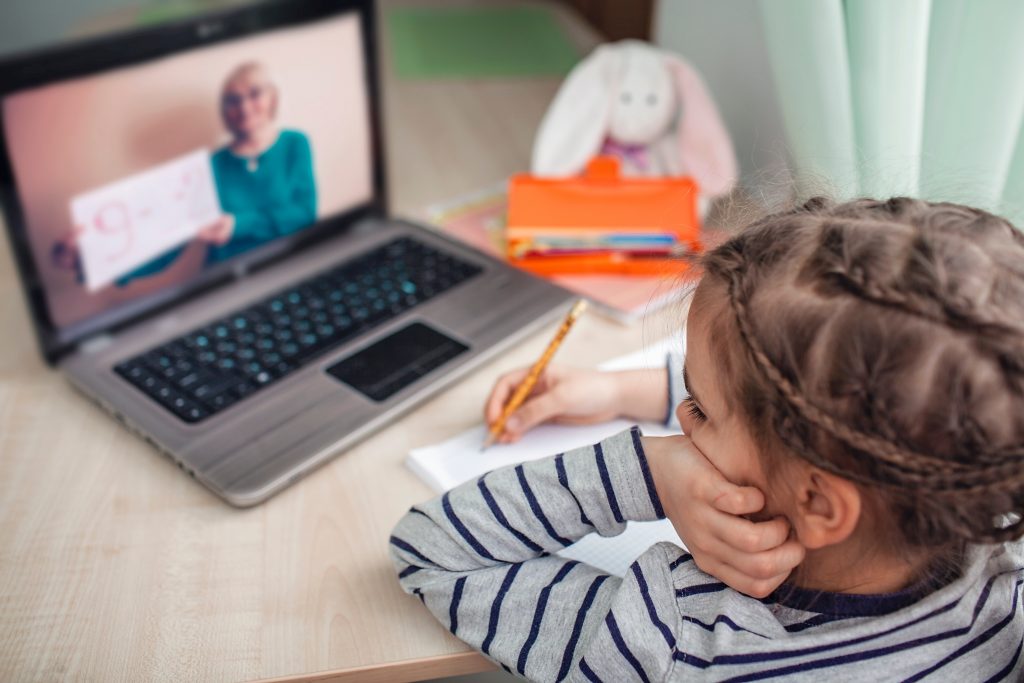 Not long ago liberals were telling us that children were spending too much time in front of television screens, computer screens, and Play station games, that they need more outdoor time, interaction time with other children to build their social skills, that they need to learn to be good environmentalists and stewards of the world around them. Those blue screens were affecting their health, destroying their eyes, their vision, and the ability to socialize properly.

Suddenly, with the lockdown controls in place, schools are refusing to teach children in a classroom, they are switching to virtual teaching and communication which is counter to everything they had said previously. The new and worrisome normal is to keep your child 6-8 hours a day in front of a computerâ€™s blue screen.

I suppose children no longer need fresh air, no longer need playtime, no longer need physical activity, they just have to stay indoors, preferably with their masks on, and if they do venture outside, they better wear a mask, even shields on top of these masks, properly set over their noses and mouths at all times.

Children, like the rest of us, have lost their identity as humans, have lost the ability to take their social cues from facial expression and learn in social interactions what various non-verbal communication through face and eyes represent.

Their hearing is getting worse as well. Adults did not realize how much they read lips in noisy environments if they want to hear what people say. Children are no different. It is just as frustrating to them as it is to adults.

Now the all-knowing socialist educators, who have been manipulating education for decades from their academic ivory towers and from the public classrooms, are trying to excuse this repugnant new reality as â€œchildren adaptâ€ easily because they are so malleable. The question is, what are they adapting to? What does this faceless cowardly new world reality controlled by lockdowns represent? And is it good for humanityâ€™s health? Is it good for our children and their future?

Mike Adams wrote that governments are â€œrolling out new, Orwellian medical fascism laws and edicts that set the precedent for mass arrests and forced relocation into quarantine camps for those who resist.â€

Global vaccinations for the human-engineered pathogen did not take any convincing â€“ after media-driven non-stop panic and fear, most humans were eager to be injected with an unproven and rushed vaccine no matter what the vaccine compliance costs might be.

Vaccine development and implementation for any disease is not without problems but the process usually takes years, and the final product is not rushed to the market.

Potential toxic substances, nanotechnology with â€œquantum dots,â€ and mRNA sequences which, according to Jon Rappaport, reprogram the bodyâ€™s cells to produce protein sequences engineered into the mRNA vaccines, did not deter or give pause to billions clamoring for a Covid-vaccine now so they can return to their normal lives.

But globalists keep telling us through heavy and non-stop advertising that we now have a â€œnew normal,â€ we cannot return to life as before, and we must listen to tech gurus and billionaires like Bill Gates as the ultimate authority in vaccines, everything human, and population survival at a vastly reduced rate and highly impoverished level because it is good for our collective planet. I am positive that logical and thinking Americans will not like the â€œnew normalâ€ so heavily touted on cable channels and by governments around the world.

The â€œnew normalâ€ will introduce reduced mobility and blackouts like the one experienced in Boston last night during the Trump/Biden third debate. Communists have ruled in many countries throughout the 20th century using fear, intimidation, forced compliance, lack of water, lack of mobility, lack of electricity, severe food shortages, and substandard or non-existent medical care.

Even today, decades after communism â€œfellâ€ in Eastern Europe, many rural areas, just miles from glittering cities with modern amenities and developments, the population and their children live in poverty, no paved roads, no medical care, primitive lifestyles, and lack of medical care and facilities.

And that is how billionaire globalists would like to keep it. No one else should achieve the development, progress, and standard of living that America had experienced, a development that has lifted and improved the lives of billions.

Environmentalists have told us that there are just too many of us and the planet suffers. To make it whole again, a few billions must disappear. It is unclear how, but it is easy to surmise â€“ infertility, attrition, bad vaccines, dirty water, mass disease, wars, poor medical care, and even famine.

Dave Forman, founder of Earth First, said that â€œPhasing out the human race will solve every problem on earth, social and environmental.â€ But Kenneth Boulding, originator of the â€œSpaceship Earthâ€ concept, had an even more outrageous idea. â€œThe right to have children should be a marketable commodity, bought and traded by individuals but absolutely limited by the state.â€ (Both authors quoted in The Environmentalistsâ€™ Little Green Book, 2000)

Note:Â For parents who home-school or are interested in home-schooling, and don’t want their child sitting in front of a computer 6-8 hours a day, here is a good suggestion: The Robinson Self-Teaching Home School Curriculum uses a computer only for printing out books