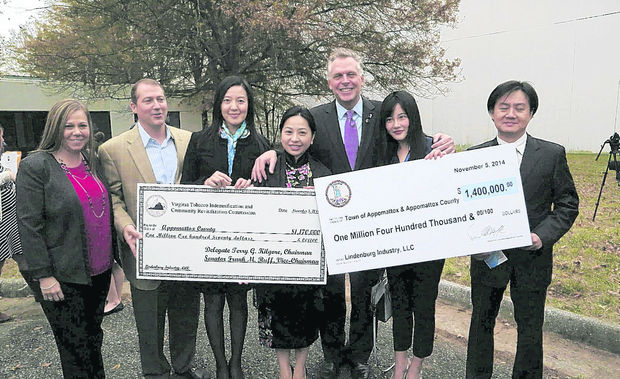 Chinese firm bamboozles McAuliffe out of $1.4m in taxpayer money

Just over a year ago, in November 2014, Virginia Governor Terry McAuliffe beamed with pride at having concluded a deal to bring 349 jobs to the ailing economy around Appomattox. The plan was to use various state economic development incentives, including an upfront payment of $1.4 million from the Governor’s Opportunity Fund. From the Governor’s press release at the time:

Governor Terry McAuliffe announced today that Lindenburg Industry, LLC, a subsidiary of a Chinese-owned corporation, will invest $113 million to establish an industrial honeycomb manufacturing operation in the Town of Appomattox in Appomattox County. This project, which represents the first new company announcement in Appomattox in 15 years and the largest since Thomasville Furniture began construction in 1972, is a direct result of the Governor’s meeting with company officials in Beijing, China during his Asia Marketing Mission last month. Virginia successfully competed against North Carolina for the project, which will create 349 new jobs.

But, as it turns out, McAuliffe’s enthusiasm about prevailing over the Tar Heel State was misplaced. You see, the Chinese “company” has now apparently bailed out, without refunding the Governor’s check.  It seems that folks in North Carolina were a wee bit more responsible with taxpayer funds. They did background research that the Governor’s office did not.  In fact, an investigation by The Roanoke Times found that:

– Virginia analysts relied on a Catalon Chemical company website produced in China that featured misleading information, including using an address at 90 Piedmont Industrial Drive in Winston-Salem. The Winston-Salem Journal is one of several sources that verified the company never had operations at Piedmont Triad Industrial Park, the former Stroh’s Brewery plant. 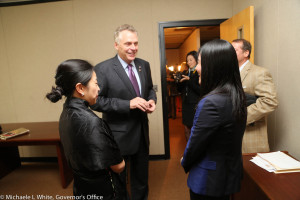 In other words, in their rush to get the Governor much-needed positive publicity, the Governor’s people were horribly derelict in determining whether it was a good idea to write an enormous check to an essentially unknown Chinese entity. What’s more, the Governor expended significant taxpayer resources visiting with these Chinese business executives in Beijing.

One wonders, given that he failed to undertake the most basic of diligence prior to booking a trip to the other side of the planet, how many other schemers in foreign jurisdictions have tried to take advantage of McAuliffe’s eagerness to make deals using other people’s money?

Someone must be held accountable for this gross negligence with taxpayer funds.  This is particularly so given that, in addition to the Governor’s Opportunity Fund, funds were also slated to be spent from various other public accounts:

The Virginia Economic Development Partnership worked with the Town of Appomattox and Appomattox County to secure the project for Virginia. Dominion Virginia Power also provided support. Governor McAuliffe approved a $1.4 million grant from the Governor’s Opportunity Fund to assist Appomattox with the project. The Virginia Tobacco Indemnification and Community Revitalization Commission approved $1.17 million in Tobacco Region Opportunity Funds. The company will receive benefits from the Port of Virginia Economic and Infrastructure Development Grant Program. Additional funding and services to support the company’s employee training activities will be provided through the Virginia Jobs Investment Program.

This kind of government-by-slush-fund is bound to produce the kinds of abuses and negligence on display here, particularly when there is little to no oversight (notably, Virginia’s FOIA law has special protections for records surrounding economic development efforts).  This is where the General Assembly should step up.

The Governor’s budget contains $140 million in economic development spending.  While it is true that such spending does usually bring significant returns, this latest episode in Appomattox demonstrates clearly that more oversight of that spending is necessary.

Del. Kathy Byron (R-Lynchburg) and Del. Chris Jones (R-Suffolk) are co-sponsoring a bill that would take a first step in this direction by ordering the Joint Legislative Audit Review Commission to review the Virginia Development Partnership, the umbrella organization that coordinated the Appomattox fiasco.  That’s a good start, but better would be legislation with a permanent requirement for independent annual audits, the results of which (with any necessary confidentiality protections) would be made public.  I’m not holding my breath waiting for the General Assembly or the Governor to voluntarily surrender certain of their own prerogatives, but one can always hold out hope.

Some folks involved with this disaster don’t have a lot of reason to hold out hope, though.  Often overlooked is the collateral damage something like this can cause.  Not only does Appomattox not get the 350 new jobs, but the contractors and other workers who had already started work on the now-defunct project are left holding the bag.

Yes, this means that the negligence of the McAuliffe administration in handing out public money for economic development has now left the area even worse off than when the Governor arrived to “help.”  Area contractors are owed approximately $450,000 for preliminary work already done at the site.

Who is going to bail them out?