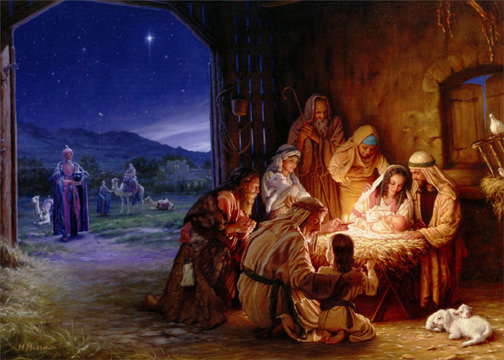 I was in a hardware store in small town America, somewhere out in â€œFly-Over Country,â€ as the east and west coast thumb-suckers call the middle of our country. If the liberal dweebs truly knew the quality of people they were belittling as unimportant, they would realize that they ignore them to their peril. But I digress.

The lady sales clerk â€“ yes, ladies can be quite knowledgeable about hardware. The lady helping me had a fussy toddler in one arm while she helped me find the right sheet metal screws with the other. (Family is important in fly-over country.) As the child continued to fuss, one customer said, â€œLooks like someone doesnâ€™t want anything for Christmas. Santa is still making his list.â€ The little girl got very still and stopped fussing.Â

This struck me as an example of how Christmas has gone full circle.

Jesus was not born in December. Church historians believe Jesus was born in the spring of the year. However, the people of the dark ages of Europe held pagan festivals in honor of the winter solstice. They, as do we, needed the occasional holiday, so instead of forbidding the people from celebrating the festival, Church leaders created a religious celebration in its place. They called it Christ Mass.

This in no way denies the reality of the miraculous birth, sinless life, and atoning death and resurrection of Jesus Christ. This merely points out how we came to celebrate Christâ€™s birth on December 25.

Follow me here, and we will get back around to the hardware store. As the Christ Mass (or Christmas) became increasingly popular with the people, various elements were added to it. In the Netherlands, Bishop Nicholas (or Bishop Claus, the short form of Nicholas) started the tradition of going about his town the night before the celebration and leaving treats and small presents outside the homes of â€œgood little girls and boys.â€ Thus, when the Catholic Church canonized him and declared him a saint, he became Saint Nicholas, or in the Dutch, Santa Claus.

Centuries later, in 1823, â€œSanta Clausâ€ was given his jolly, fat, chimney-crawling-in-a-red-suit, reindeer driving persona in a poem authored by Clement Clarke Moore entitled â€œA Visit from Saint Nicholasâ€ or more commonly â€œâ€˜Twas the Night Before Christmas.â€

This is where things started to come full circle. Instead of being a festival to honor the birth of Jesus Christ, Christmas began slowly reverting to â€“ at least in the minds of many â€“ nothing more than a gift giving festival at the winter solstice that causes great anxiety, stress, greed, disappointment, and lack of gratitude among those who have forgotten â€œthe reason for the season.â€

The only giving we really need to be concerned about is the gift of Godâ€™s Son to bring joy and salvation to the world. Unfortunately, in too many families kids are concerned about getting what they want, while their parents go deeply into debt each year so that their kids wonâ€™t curse at them for not getting them what they demanded. And all the while stores are marketing â€œbuy, buy, buyâ€ because a large percentage of stores, both large and small, have to bring in as much money as possible at this time of year to avoid bankruptcy during the rest of the year.

Those people have no clue what they are missing due to their unbelief. They seek joy and fulfillment in things that will never provide it long term. Instead, they seek meaning in drugs, food, clothes, success, shopping, sex, money, power, all the things that might make someone feel good for a moment, but cannot provide the lasting peace, joy and fulfillment that can be had only by a relationship with Jesus Christ.

Back to the hardware store: the fussy toddler became very good when she thought Santa might not bringing her presents. Too many parents are teaching their children, either purposely or inadvertently, that Christmas is only about gifts. For them, Christ Mass has reverted to a pagan festival of all-consuming gift-getting. Unless these families one day discover the true wonder and joy of Christmas, all they will have in the aftermath of the holiday is a sense of emptiness and a huge pile of discarded packaging.