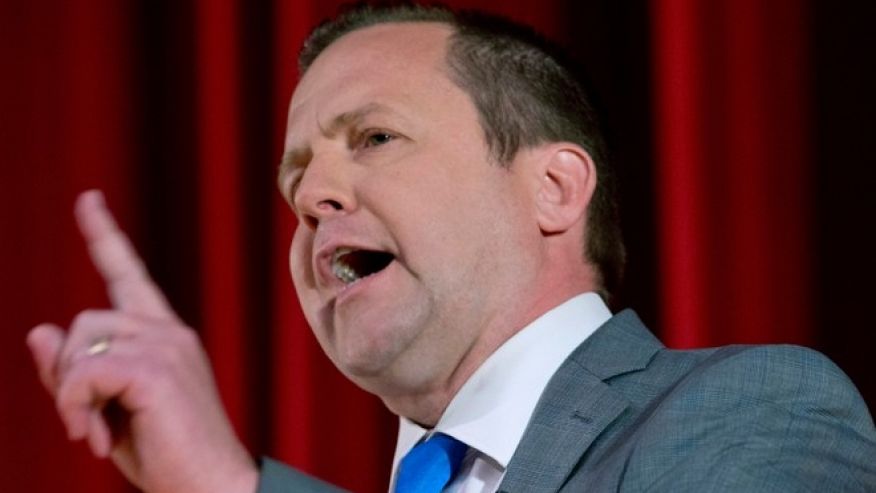 Prince William County Chairman Corey Stewart, fresh off a near miss primary upset in his recent Virginia gubernatorial bid, is at it again.

Employing pure strategic brilliance, Stewart on Thursday launched his next campaign – this time for the GOP nomination for U.S. Senate to run against Democratic incumbent Tim Kaine in 2018 – in the middle of withering near 100-degree temperatures in Northern Virginia.

And a lot of Virginia GOP pols felt the heat – not of the summer sun kind – this was political heat, Corey Stewart style.

“The Clinton and Obama ideologues have controlled Virginia for too long, and it’s time to turn Virginia red again,” Stewart said in a statement, “and no weak-kneed Republican is up to that task. I will be the fighter the Republicans need to defeat the Democrats in Virginia.”

Republican governor nominee Ed Gillespie, who squeaked out a nail-biting 1.4 percent win over Stewart in the June 13 GOP Virginia primary has to be thinking: “When does this guy go away?”

Not for at least another 17 months, Ed. So get used to it. Truth be told: it’s all good.

The timing of Stewart’s announcement is nothing short of masterful. It allows the now U.S. Senate candidate to continue raising funds while cultivating his small donor base – critical for a federal campaign that carries an individual $2,700 contribution limit.

Virginia state races are like the wild west of fundraising – they carry no limit. So lots of smaller individual contributors become a lynchpin campaign asset in a federal statewide effort.

Although key operatives like former campaign manager Spence Rogers and southwest Virginia war machine Jack Morgan are not on his new senate campaign payroll yet, they can’t stay unemployed for too long or they’ll be forced to look at other campaigns and opportunities. This keeps the team together.

They’ll face challengers who have to ramp up and bring in new people. This gives Stewart a significant early edge in the nomination fight.

Many credit Rogers, a former Iraq veteran who ran point on General David Patraeus successful Iraq surge and set up Sen. Ted Cruz’ winning 2016 Iowa caucus ground game with masterminding Stewart’s under resourced governor campaign. Opponents will likely have to deal with him again. And good luck taking on Morgan in southwest Virginia in a Republican primary. If you do, you best pack a lunch.

FOR GILLESPIE: CHRISTMAS IN JULY

The early launch additionally allows Stewart to keep his name front and center, and remain relevant during the 2017 statewide campaign.

While surface level and lazy conventional wisdom by Virginia’s punditry class may suggest that Stewart’s ’18 foray would cause trouble for Gillespie, nothing could be more inaccurate.

No doubt Stewart’s bombastic campaign rhetoric, his penchant for political bomb throwing and his take no prisoners demeanor will contrast drastically with Gillespie’s more measured collegial style on the stump, but Stewart has the ability to keep his base motivated for Gillespie in the fall.

It’s the perfect storm.  Stewart needs Gillespie voters and vice versa. This is an accidental match made in political heaven. Does God feel sorry for Virginia Republicans?

The more Stewart goes nuts on Democrats, the more votes from his base Gillespie gets on November 7, 2017 – with no downside for Gillespie’s more cerebral Northern Virginia electoral strategy.

Why not vote for Gillespie if you like Stewart? He can help him raise a ton of money if he’s the governor and Stewart wins the senate nomination.

Kaine will spend $30 million if he has to keep his seat. Gillespie knows a lot of people. His roladex is bigger than a New York City phone book.

In his statement, Stewart left no doubt about the nature of his campaign.

“As an obedient servant to Hillary Clinton and Barack Obama, Tim Kaine is the leading obstructionist against Trump’s America First agenda,” Stewart said. “Virginians and citizens across the country need a fighter representing them in D.C. who will stand up to and defeat the smug Washington elites.”

On style Stewart minced no words: “This last election proved that Virginians want a fighter who will stand for them. The era of the kinder, gentler Republican is over.”  Stewart said later that his campaign against Kaine would be “ruthless.”

The fact that Stewart was dismissed as Virginia chairman of the Trump campaign tainted him in the ’17 race, and cost him valuable support from some Trump voters. It has no relevance two campaigns removed. That was yesterday’s news.

Ed Gillespie’s election prospects just improved dramatically. You can thank Corey Stewart for that.  Virginia Republicans, on seven game statewide losing streak, may have finally stumbled into the promised land.

The other GOP candidates who are eying the ’18 race are now in a difficult position.

We rate Stewart today as the clear frontrunner and decisive favorite for the nomination.

Carly Fiorina 5:2
She was the favorite when she went to bed Wednesday night.

She’s an underdog to Stewart when she woke up Thursday morning.

The former presidential candidate has the best chance to deny Stewart the nomination but she’ll start way behind in Southwest Virginia. And remember, Stewart carried his home county, Prince William by nearly three to one after many elected officials abandoned him.

She is tough as nails and she’ll take it right to Stewart.

Riggleman, short on cash, drew standing ovations wherever he went. He’s part Trump, part Rand Paul, part General Patton and part Willie Wonka. If he can raise enough money he can catch lightning in a bottle, give Stewart fits and win.

E.W. Jackson 7:1
Nowhere to go…Jackson’s dream scenario pitted him against several GOP party establishment moderates where he could carry the Trump and Cruz mantle simultaneously. That’s tougher with Stewart in the race.

Jim Gilmore 50:1
The former Virginia governor received two votes in his precinct in the 2016 Virginia Super Tuesday GOP presidential primary. We’ll assume former first lady Roxanne voted for him. That’s a narrow base to build from. Can you say ambassador to Germany?

Laura Ingraham – OFF THE BOARD
To run for U.S. Senate in Virginia, famous Fox news contributor, noted author and nationally syndicated radio talk show host Laura Ingraham would have to get out of her chauffeured driven limousine and actually talk to regular working folks at a Waffle House in Danville. And eat grits.

The green room at Fox with multiple make up artists is just so much more civilized.

If Stewart demonstrates CONTROLLED strength and stops the nasty criticisms of others in the republican party – but stays on policy – he could do it. Kaine will have Soros/Clinton/McAuliffe money and the usual underhanded tactics of the progressives, so good luck!

A viewpoint from a simple voter.
Stewart is currently out of the pic for THIS Nov. Now this site uses it’s efforts not to get Gillespie’s policies out but to belittle the 2nd place Candidate. Now I look above at the other stories and they have (TBE) turned to a Ben fellow. This site could use the next 3 1/2 months to promote the policies of the Republican Gubernatorial Nominee to try and win the Executive position , will they?
My remaining children would like to start attending LA ( Liberty Christian Academy ) we discussed the $7,000.00 annually expense per child.
We have come to the conclusion that electing Ralph Northam provides us with that opportunity. Electing Ed does not provide this form of financial security. At the LU (R) primary Ed said; I will cut DPOR Regulations and create job growth” This is a BULL CRAP! Which Regulations? Please list code and section. Now expected job growth , now expected revenue from “broadening the base”?
So Ed is telling Va. what is good for us with no policy. Let’s stay on that generic , irresponsible policy of DPOR cuts. Me being a Class A licensed Builder and Employer of 32 years experience in Virginia says that Executive order 24 by Governor McAuliffe should be carried over by Northam, Gillespie does not have the qualifications. I want my children at LCA , the only way possible is through legal Commerce. How come Ed doesn’t speak of EO24 or JLARC 427?

Yikes, with the possible exception of Riggleman that list of potential ’18 senate candidates is DREADFUL.

Is that really all we have?

This whole Stewart/Gillespie feud, now turned brilliant campaign stradgedy, now appears to be nothing but “engineered” party base manipulation. Probably hatched out in a Gillespie/Stewart/Whitbeck meeting in some smoke filled backroom at a D.C. watering hole, with the checkbook carrying power company lobby probably there as referee.

John, you couldn’t even come close to shaking up Northham yesterday on your show. Not your fault. As an independent observer here, Northham appeared to come across as rock solid during your grilling.

We still can’t afford healthcare because of the establishment. Words long ago ceased to change anything. We know them by their works.

This kind of gets Ed off the hook. Writing in Corey for Gov. now just doesn’t fit. Hey, Ed, we don’t hate you.

This is the best thing that ever happened to Ed Gillespie. We’ll all just hold our collective noses and “pencil in” Ed, and pray for the best. Actually, it is certainly better if we can any kind of republican (did not capitalize on purpose) in Nov. We’re tak’in our state back.

Heard somewhere that Riggleman has already announced for Governor in 2021. Of that’s true, count Riggleman out here

He’s running for US Senate

Are Corey’s ADAMS Center shenanigans going to hurt him? I’m still enthused about Nick Freitas and think he’s fresh air in the party! Between Establishment Ed and Diabolical Corey, I’m ready to leave the party! (Hopefully that won’t put me in a foxhole with Joe Scarborough!)

The Nick fellow is cute.
“Goverment does not fix problems”. Ok , so why did the Va. Republican house proceed with Delegate Minchews Bill HB253 requiring the purchase of workers compensation insurance prior to the application for Contractors license? Look at the impact statement, it makes Va. Goverment grow and furthermore it is to benefit only the insurance companies.
If it had one ounce of credibility this bill would contain a VEC account and Employer ID number requirement (for “broadening the base”. Did that there Nick fellow speak up about this? NO!!!

Great post and your odds are spot on, as always.

Yeah, he was spot on predicting Cantors massive win.

Ancient history. He wasn’t the only one to make that prediction.

I predicted Brat and was the only network in America who carried election night live. No one was live that night but us.