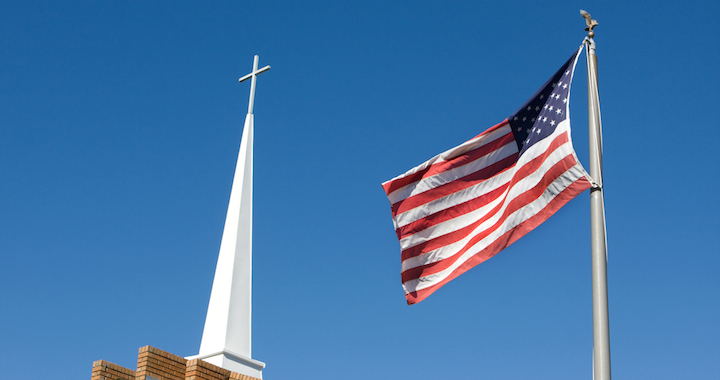 Church and State cannot be separated

People in general do not seem to agree on much these days, split between their own confused ideas and the latest narrative promoted by the deceitful mainstream media, beholden to the globalist ideology of Democrat Socialism and Cultural Marxism.

Often the thought processes of the voting masses are incoherent because their knowledge, the reality, and their basic instincts of survival and safety are perverted by the globalist agenda but they are too ignorant to realize that what they espouse is quite contradictory. So they vote into Congress frightening Millennials like Alexandria Occasio-Cortez, who will now have the power to fundamentally alter our collective future in the distorted image of her disordered and ill-informed mind.

It’s not just the political representatives who are working against the wishes of the people. The Christian clergy of all stripes are organizing on behalf of foreign invaders looking for welfare and against the best interests of the American people.

Educators and academics are happy to shape the minds of young people in their own globalist Marxist vision. They’ve been indoctrinating us for decades that we cannot mix Church and State, we must tear down any symbol of Christianity that might offend others, while bending over backwards through threats and the courts to accommodate a few offended atheists, many offended Muslims, and other refugee “stock” as the U.N. defines them, mushrooming all over the world with help from the U.N. Refugee Agency (UNHCR). https://www.unhcr.org/

Citizens in European countries are ahead of the curve in this indoctrination into Cultural Marxism, a worldwide phenomenon driven by controlling globalists with large pockets, aiming to erase borders and to destroy every country’s sovereignty. Ordinary people with good intentions are voting for their own demise, for the Socialist Democrats, who are short on knowledge and long on propaganda, corruption, and deceit.

Romanians fight bitterly over investment in the construction of Orthodox churches. They want instead to improve the declining education of their children, to build hospitals and roads which they were denied under Ceausescu’s bleak communist regime. Decades of communist indoctrination and terrible medical care has confused their priorities. The soul of a person or a nation cannot be healed through Marxist ideology and globalist education. Faith and church are needed.

Eastern Europeans admire the wonderful education system in Western European countries as a model of “global citizenship.” But they fail to see how morality has decayed there and how they’re losing their national identities, histories, and their borders to the demands of Angela Merkel’s EU.

Romanians bemoan the fact that too many Orthodox Churches are being built, that the cost of one church could help build five badly needed kilometers of interstate.

The church was instrumental in founding universities across Europe and in the printing of books and educational materials.  The oldest universities in Europe were run and staffed by priests. And where would we be today if beautiful cathedrals were not built over the centuries by very poor and rich parishioners alike who donated to the construction funds?

Perhaps Romanians should be outraged not by the expenditures to build churches but by the 3,000 euros spent each month for every corrupt politician in Parliament, a financial waste that dwarfs any spending for the building of a church that would preserve the soul and character of the nation for generations to come.

People need both cathedrals and hospitals to care for their souls and their bodies. Churches must not be just museums for tourists, or places for baptisms, weddings, and last rites.

Additionally, the building of a school or of a library does not guarantee a proper education or the storing of real knowledge and ideas – both can be just places of indoctrination.

Why are we visiting in awe the Sistine Chapel and the Vatican, all gold-leafed and marbled with sarcophagi, religious statues, paintings, colonnades, murals, mosaics, and objects d’art, reaching sky-high to Heaven? Poor people suffered for the glory of God, the Church, and the Pope. Good or bad, it is our collective history, our collective civilization which has evolved over the centuries of human existence.

Atheists complain about megalomaniacal priests and too many churches, but who is to say what is too much? Priests have always been vectors of faith, education, and of the political class in order to steer society’s mind and soul in the desired direction. A few higher ranked priests like the current Pope have used their faith podium to dabble in the “scientific consensus” of climate change and social engineering.

Others argue that people can pray anywhere, they don’t need a golden church to do so, and money is much better spent on education. What kind of education would that be? Common Core Standards? Building a fancy library does not guarantee that people will suddenly start reading.  And what would they read and study? “Progressive” propaganda? Will they read the classics? Will they learn about documented and archived history or revisionist history? Will they learn civics? Will they learn national pride and to appreciate God and country?

Many former Iron Countries citizens have left their homes and are building the library of the future in other countries, influencing the spread of Cultural Marxism they call Socialist Democracy, a sad perversion of reality which naïve humans believe blindly.

Church and State have been intrinsically connected throughout history and separating them is destroying the essence of who we are. We cannot separate the influence of the church from the foundation of the state no matter how many times atheists and their corrupt lawyers sue.