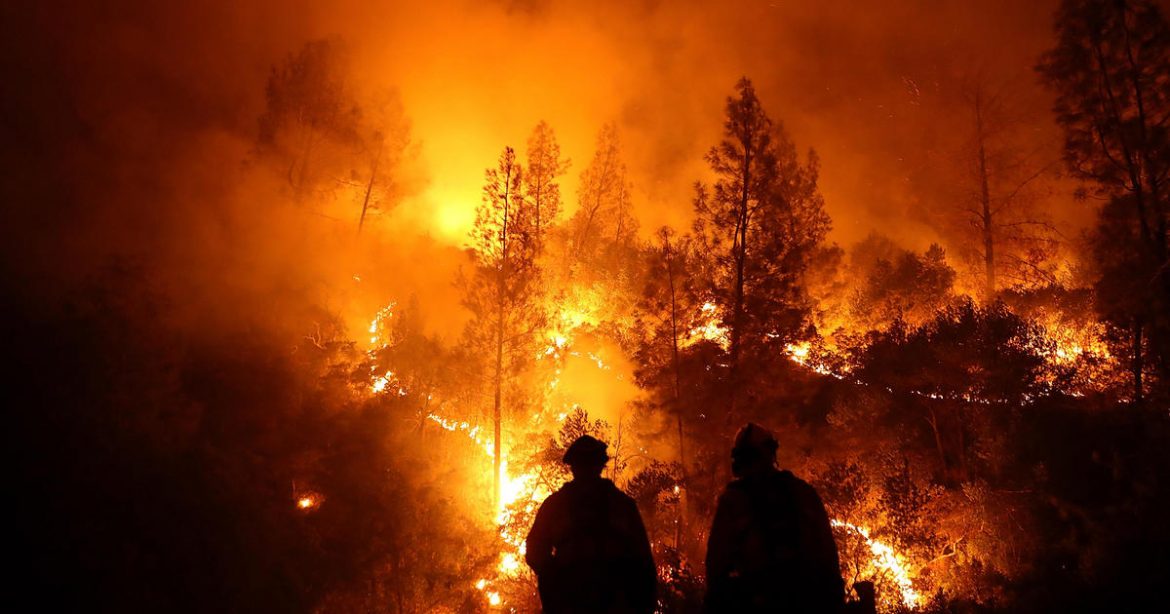 As catastrophic, out-of-control fires continue to burn millions of acres of forests in California and Oregon, we find ourselves engaged in a renewed national debate over claims by environmentalists and politicians that the Earth is headed for catastrophic climate-changes that may (or may not) be manifest until a century hence. These dire changes – based on a body of predictions from computer-based models of questionable accuracy – are being posited as the rationale for draconian measures on energy production and use that would inflict serious harm on the American people’s lives and economy. Indeed, a new energy plan, the Green New Deal – brainchild of freshman Representative Alexandria Ocasio-Cortez (D-NY) – has become the political centerpiece for Democrat Joe Biden’s campaign for the presidency.

The climate-issue, as currently framed, is confusing on at least two counts. First, because the name of the crisis keeps changing. The term “climate-change” is a replacement for the earlier scare-term, “global warming,” which replaced the 1970s scare-term, “global cooling.” You have to be at least age 60 to recall that the looming cataclysm of the ‘70s was a “new ice-age” that we were inexorably sliding into (so to speak). The prospect was dire: the earth was cooling – some said “dramatically” – and we would probably all freeze to death in a few years, or decades at most. The tropics would ice over, and most of the Continental USA would become uninhabitable. Beach-front property would become worthless.

There was no consensus on why the earth was cooling, but reporters, politicians, and university profs – all on the scout for federal research-funds – were pretty sure humans were causing it. Dark suggestions were starting to emerge that hydrocarbon fuels were the primary villain. Although carbon dioxide constitutes a mere 0.04% of earth’s atmosphere, some scientists believed CO2 from fuel-combustion was blocking the sun’s rays and causing the cooler temperatures. Skeptics noted that earlier ice-ages covering large parts of the earth had occurred when humans numbered only a small fraction of today’s population, and before oil or coal had even been discovered. But these “deniers” were either ignored or shouted down.

Modelers, scientists, politicians and others were just starting to solidify their theories about the new ice-age when the earth took a perverse turn and began to warm. (Don’t you just hate that?) With no trace of embarrassment, the global-cooling crowd (including Big Media) switched sides, word-smithed their theories, and began to denounce fossil-fuel consumption for causing global warming. We were all going to roast, they warned. Polar ice would melt, oceans would rise, and coastal cities would be flooded. Al Gore said wee had just ten years to act before it would be too late. Spurred on by Dr. Gore’s (now-debunked) film, An Inconvenient Truth, the warming-movement quickly grew in strength until it had the support of a sizable scientific/political community. Scientists and environmental activists have benefited from federal funding for climate-research of over $100 billion since 1989.

Inconveniently, though, the story had to change again, around 2010, when it became clear that the earth’s temperature had not gone up since 1998. The non-warming streak has now continued for 20 years, and there are troubling indications – mostly suppressed by progressive-leaning media wedded to the cataclysmic warming narrative – that we might be entering another cooling-period. Aware that this kind of whipsaw effect could turn their scare-stories into late-night comedy-fodder, environmentalists renamed their disaster-theme “climate-change.” It was a stroke of political genius.

Henceforth, whatever direction temperatures go can be attributed to climate-change. Very hot summer days and droughts are cited as products of climate-change. Exceptionally cold winters or big snowstorms: also due to climate-change. Hurricanes, ditto – especially if they make landfall in the Eastern USA. Heavy rains, drought, wildfires – possibly even earthquakes – can all be marked down to changes in climate that will end life as we know it unless we take drastic action by (you guessed it) reducing carbon dioxide emissions from burning hydrocarbon fuels.

This reduction can be achieved only by paying massive taxes and converting our economy to expensive “renewable” means of generating power – e.g., solar panels, windmills, treadmills, perpetual motion machines (not yet perfected), etc. (Ambitious plans for energy production from gerbil-treadmills had to be scrapped because the volume of gerbil-waste made it impossible to retain technical staff.)

Democrats’ great Climate Champion, Barack Obama, told the United Nations that undeveloped regions, like Africa, must be kept primitive in order to save the rest of the planet. The consequence of shortened life expectancies, due to disease fostered by unhealthy living conditions, was shrugged off as a regrettable (but necessary) casualty of our noble crusade to “save the earth.” Frustrated African politicians noted that westerners who advocate these measures would not tolerate Africans’ dirt-poor living conditions for ten minutes. Although tapping Africa’s reserves of a trillion barrels of oil and incalculable coal-reserves would transform the continent into a modernized industrial power, the Keep Africa Primitive movement jus’ keeps rollin’ along.

The easy conversion of the cooling/warming story to “climate-change” has been enabled by a second major point of confusion – now widely reinforced by the media – over the terms weather and climate. These words are routinely interchanged by reporters, pundits, politicians, and even some scientists.

According to the Merriam-Webster Dictionary:

Regions closer to the equator have climates which feature warmer weather, while regions closer to the poles have climates of generally colder weather. Some regions tend to be dry; others are normally very wet. The aggregate of weather for a certain region of the earth, over many decades or even centuries, is called its climate. Weather for any region varies – day to day or year to year – but it tends to stay within certain bounds, overall. Weather is a component of climate, but they are not the same thing. Schoolchildren once understood all this, but now, not so much.

Today, even adults – especially reporters and politicians – are confused about this fundamental distinction. Every time a big storm sweeps in or we have some really hot days, we’re blitzed by ominous warnings that the “climate” is changing. Yes, these are fluctuations in the weather, but they are entirely normal. I’ve lived long enough to have seen some pretty bad hurricanes, snowstorms, floods, etc., in eastern Pennsylvania. Is weather more severe now than in the 1940s or ‘50s? Politicians say yes, but serious scientists disagree. Studies show that the number of severe hurricanes in the half-century 1950-2000 was no greater than in 1900-1950.

In a 2015 article, noted columnist George Will wrote: “…something about which everyone can agree is that of course the climate is changing – it always is.” But this almost-plausible-sounding claim betrays Dr. Will’s confusion of “weather” with “climate.” Yes, the weather is always changing – rain one day, sunny the next, etc. But is the climate “always changing?” Well, yes and no. Clearly it has changed, from time to time, over spans of many centuries. But whether it is changing now – how much, how rapidly, and by what means – is not established because our time-sample of data is too small. We’re micro-analyzing small time-segments and extrapolating them out a century or more. This serves a political purpose, but it is not sound science.

Given these uncertainties, we should avoid rushing into radical changes in how we live and work just because a few people – who are no surer about any of this than you or I – believe we are causing the earth’s climate to change more quickly than it normally does. Last I checked, “belief” was not a scientific concept. So until a real trend becomes clearer, over perhaps a century or so, we ought to resist any drastic measures. Then, after studying the problem properly, we’ll have some confidence that what we plan to do (if anything) will be effective.

Half-baked “solutions” now – based on incomplete data and computer models of questionable goodness – offer no such assurance. Measures proposed by the Paris Climate Treaty, for instance – from which President Trump has mercifully delivered us – might have lowered global temperatures by just a fraction of a degree, at the cost of trillions in lost jobs, crippled competitiveness, and degraded economic growth.

Americans will do well to remember that the Holy Grail of progressive politics, for which liberals ceaselessly search, is a problem that defies solution, or even any measurable improvement, no matter how much money is thrown at it. Climate is that kind of problem – if it is a problem. It has changed, to some extent, several times during man’s recorded history without any help from us, and there’s no assurance that we can stop it from changing now – if it is changing.

Around A. D. 1000, when Vikings discovered it, Greenland was warm enough to be farmed. People lived and worked there for several hundred years before it suddenly got too cold. Scientists have theories for why that happened – sunspots, asteroids, seismic activity, supernovae, extra-terrestrials, etc. – but no one really knows. Human activity could neither have caused nor prevented the Medieval Warm Period (A. D. 900-1300) or the Little Ice Age (A. D. 1300-1850).

So when a politician tells you that he’ll stop changes in the climate if we send in all the money we have, move into grass huts, and start cooking over fires of dried buffalo-poop, keep a tight grip on your wallet and recall five important nuggets of wisdom:

“No one ever went broke underestimating the intelligence of the American public.” (H. L. Mencken)