Mr. Jarrell was hand selected by Ben Cline to speak for him and his campaign at a meeting called by Scott Sayre back in April.  Chairman Sayre wanted to bring all the candidates together to try and deal with some of the issues that had been plaguing the campaign and the convention process. 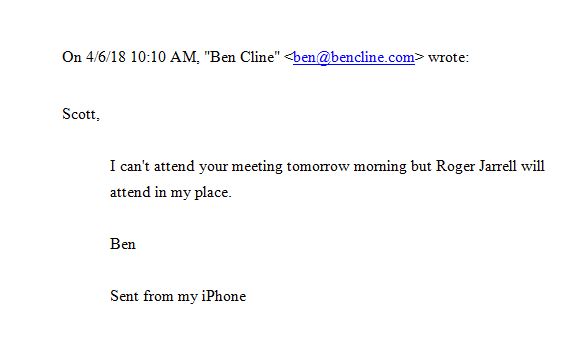 The appeal, filed by Rockingham County Chairman, Dan Cullers, presents no new information, and repeats many of the same complaints against Scott Sayre and the Dunbar campaign that were leveled by a campaign insider posting under a fake name at Bearing Drift, including the debunked “metadata” gambit.

The appeal also makes that claim that delegates are being de-certified by the 6th District and forced to endure “burdensome appeals requirements” in order to be seated as delegates to the convention.  This claim seems to ignore the fact that only the delegates themselves are able to certify or deny the credentials of any of delegate.  This has already been pointed out by Chairman Whitbeck in one of the many emails he has been sending to the campaigns, and apparently directly to delegates, about this convention.

Any delegate who was duly elected by their committee must be given credentials for the temporary chair election.

*The ad hoc credentials committee has no right to de-certify delegates. Only the convention has the right to determine who is seated.

*The local units certify delegates, the credentials committee recommends to the convention whether a delegate is seated. The convention seats delegates.

This latest move by the Cline campaign looks designed to do two things.  First, it is an attempt to continue the narrative that the 6th District process has been “rigged,” and that Scott Sayre and Cynthia Dunbar are corrupt. The second appears to be an attempt to have RPV come and “take over” the 6th District convention.

The appeal is asking for immediate relief, not only for supposed delegate disqualifications that have never happened, a complaint about the Augusta Unit committee that is outside the purview of any appeal from Rockingham, but also “other issues not yet reported.” Since there are only 5 days before the convention it would be impossible for RPV State Central committee to meet before the convention is held, much less to rule on things that have not actually happened, especially the ominous “issues not yet reported.”  They only recourse here would be for RPV to step in and attempt to take the decision making process for the convention out of the hands of the 6th District Committee.

Whether this could be accomplished legally is an even greater question.  Chairman Whitbeck would be well advised to take the numerous complaints coming out of the 6th District with a healthy grain of salt.  He has already been convinced once before to respond to issues that had already been solved.  He should also remember that this would not be the first convention where allegations of wrong-doing were lodged by people with not-so-pure motives.  In 2016 the RPV State Convention that re-elected Mr. Whitbeck faced charges of obstruction and collusion for not considering Vince Haley to be a properly filed candidate for Chairman after he had withdrawn.  Chairman Whitbeck himself, along with Executive Director, John Findlay, were also accused by Haley supporters of improper influence in the 7th District. Those allegations, on closer examination, turned out to be exaggerated and overblown.

The race to replace Bob Goodlatte has become one of the most contentious races I have seen in a long time.  The last thing it needs is for the heavy hand of RPV and State Central to be seen stepping in to take power out of the hands of the people that were elected to do the job.  It is a great shame that things have sunk to this level.

See Democrats, we Republicans are not just hateful bigots against y’all. We also hate on each other.

Mr. Whitbeck — Please. The convention is shaping up to be a circus and the results are probably going to be endlessly contested in court. How will such divisiveness help Republicans in Nov.? How will it reflect on the RPV?

Take it over. Run it straight up by the RPV rules.

Exactly! RPV is working to protect the Republican grassroots and clean up the mess which Sayre and Dunbar created. The nominee deserves better than this. I think RPV is also considering the Senate race. Republicans need strong turnout in the 6th to win statewide. Infighting which keeps volunteers angry and not working does not help defeat Tim Kaine. We will lose a lot of loyal volunteers if Dunbar is successful in booting Republicans out of the convention.

This is ridiculous and #FakeNews.

You’re right, Zack. You all just had your Unit Chairman (who has endorsed Ben) file an appeal with a petition signed by a who’s who of Ben supporters, and submitted by a trusted surrogate for Ben. It’s really all just a big coincidence, right? Move along…nothing to see here…

While we have your attention, would you like to make an official statement on behalf of the Cline campaign regarding Matt Hall’s characterization of Christians as “narrow-minded, far right church-goers?”

My, my, my….so many anonymous people using Protonmail.com accounts and brand new Disqus accounts showing up to support Ben Cline…must just be a coincidence…

If you want to quote the Bible, maybe you should ask Matt about the part where you should not bear false witness.

A final point: It is considered bad form to “up vote” your own comments.

Mick – Mrs. Silence Dogood would agree that you are using a classic diversion tactic, ignore the truth, deflect to new subject.

You really shouldn’t worry about Matt, you should worry about your own sin. You should be cautious that you do not become like a Pharisee.

Benjamin Franklin used that pen name because he couldn’t get his letters published in the Courant under his real name. You are just using a fake name because you don’t want people to know who you really are. Big difference.

I don’t worry about Matt. I want to know whether Ben Cline shares his opinions.

He doesn’t, and if anyone bothered to do any amount of research before posting on here, you would know that Matt Hall doesn’t speak for Ben Cline, like, at all. A lot of your questions would actually be answered if you cared to actually ask questions in search of the truth instead of posting remarkably absurd articles without as much as 30 seconds of research to further a false narrative. Sad!

Maybe James Harrison, from the Barely Drifting an post your grievances Zach.

I would love to ask questions, but it seems impossible to find anyone who actually speaks for the Cline campaign. You’re on the payroll, Zack. Do you speak for the campaign?

Will Ben Cline make a public statement calling for civility in the campaign, and ask his supporters to behave on social media as if they are speaking for his campaign?

Is anyone associated with the Cline campaign involved with the filing of an FEC complaint against Cynthia Dunbar and Scott Sayre?

There’s four quick questions for you in search of some truth.

Good questions! I wonder how Ben is going to “unite” the activist and establishment factions given the rancor? If he is sure of victory why not ask J Brown to stand down and let he and Scott Sayre reunite the party. It will be hard to win with ticked off activists! (purely hypothetical thinking – don’t think Roger Jerrell will go for this!)

And your point is what? Again, divert from the truth and refuse to answer valid questions. You are just another tool in Cynthia’s box…

“other issues not yet reported.” Sounds like the Mueller investigation.