We learned earlier today FBI director Jim Comey sent a letter to Congress informing them he is re-opening the FBI investigation into Clinton’s misuse of a unsecured personal email server. The letter was sent to numerous committee chairs and can be seen in full here.Â Â The body of the letter:Â 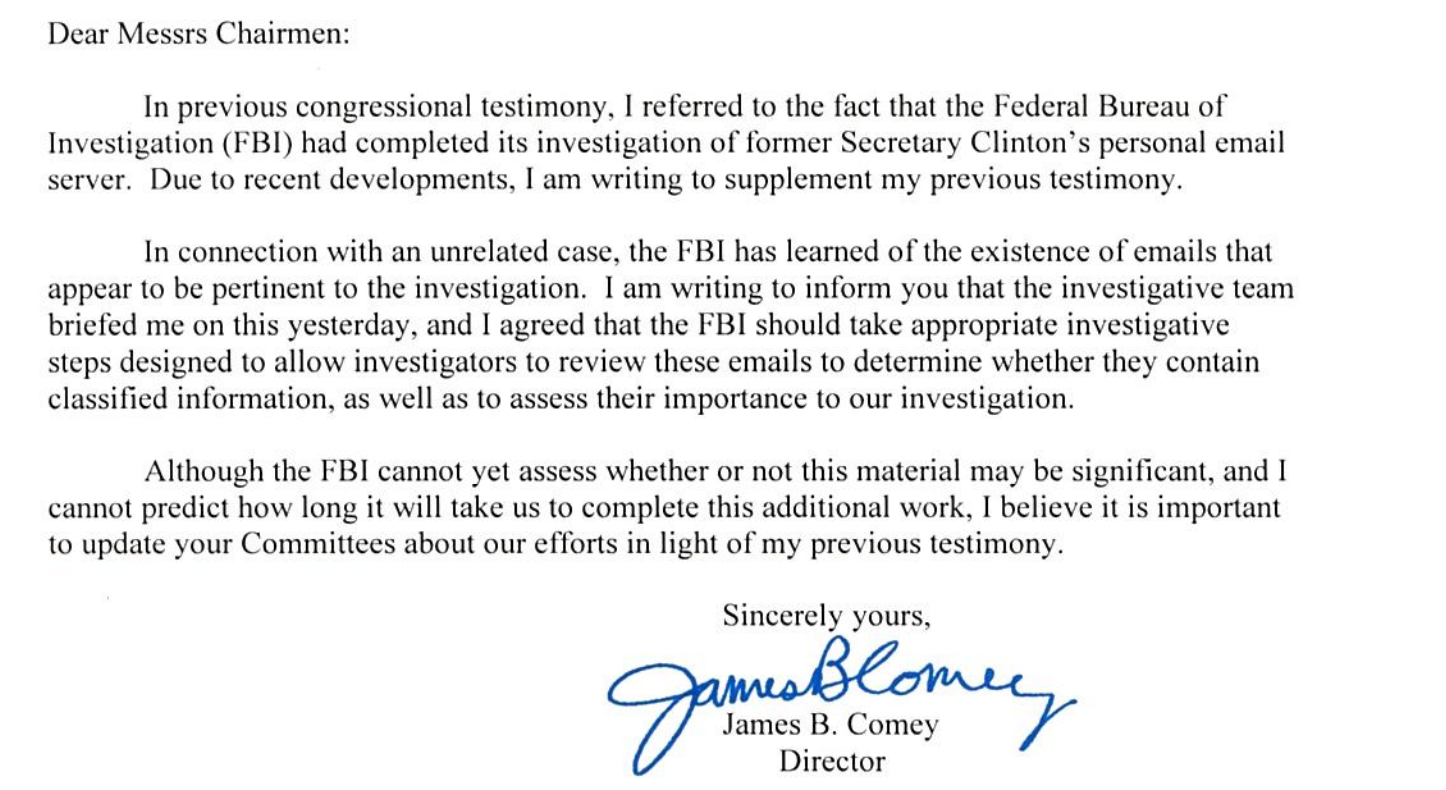 Something BIG must be in those emails or Comey wouldn’t have re-opened the investigation. Fox News has a copy of Comey’s internal memo to his employees: 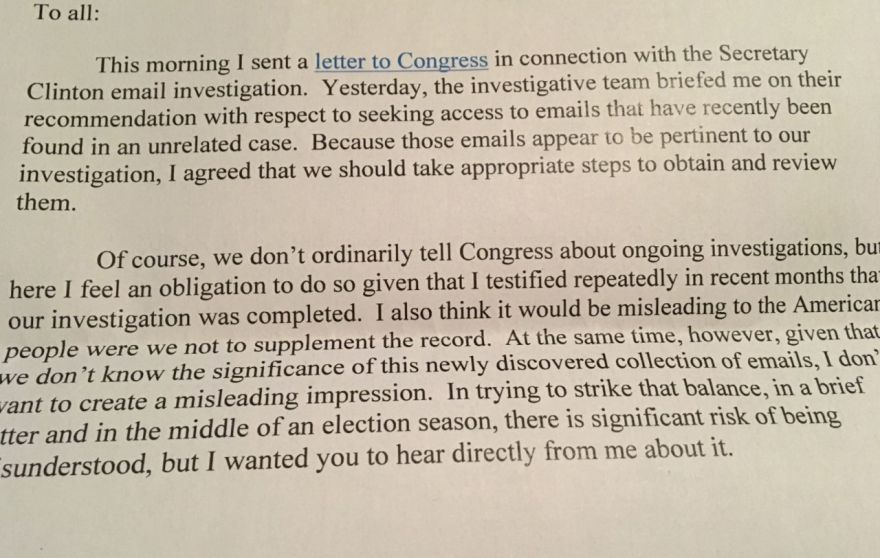 The information was discovered when the FBI was investigating Anthony Weiner’s sexting with teenagers using his home computer. Also on Weiner’s computer were emails exchanged between Weiner’s wife, and top Clinton assistant, Huma Abedine, and Clinton when she was secretary of state. We assume these emails were classified or Comey wouldn’t be bothering to investigate. Â In other words, the FBI stumbled upon these classified emails while investigating a pedophile sexting scandal involving former Congressman Anthony Weiner.

Three interesting theories as to why Comey reopened the email investigation here.Â

Clinton and Trump, combined, are like an election year Shock and Awe campaign. I swear, between the two of them it’s hard to even imagine what could happen next. Just when you think it can’t get any more crazy ***BOOM*** they shell us again with more stuff you could have never even believed would happen. Some of this stuff is so crazy it doesn’t even seem real. I mean that seriously, even ONE of the revelations that has come out in the past few weeks would be enough to end any normal politicians career, but they just keep coming down ***BOOM*** ***BOOM*** ***BOOM*** one after another, it’s so insane you can’t even wrap your mind around it.

The sweet percussion of justice and the approaching Trump Train.

When things seem insane… That’s the time to step back and see what else is coming down the road… Or is hauling ass outta here.

Where is Old Redneck with his Soros Incorporated talking points to explain from 1 to 6 why this isn’t important and Hillary MUST be elected?

He claims to be an Army Officer, but seems to be A OK with Hilary’s criminal negligence in handling classified information. The kind of thing that would get him court martialed.

Deomcrats really do not care. Morals and legality are not their thing.

Just a different patron, reversed and inverted, if you will.

Apparently, he will go to hell to protect this traitorous criminal. Now he is thoroughly embarrassed and in hiding.

Or he couldn’t stomach it anymore and someone else dons the ‘ol redneck’ persona.

He’s a paid troll in Indiana, needs to get a new script — you see how much time and how many people are required for a single tweet — just imagine the necessary resources coordinating an army of paid social media bunnies.

Frankly unless something has changed in the past few hours, I’d be very
leery of any of this stuff. They haven’t said why the investigation may
be reopened. Hell maybe the lap top has emails that prove Clinton was
telling the truth all along. Until there is a formal charge, you
shouldn’t get your hopes up. And Trump should be the last person saying anything. Mum’s the word, let it play out.

Absurd analysis. You don’t reopen an investigation to prove nothing criminal happened.

Or this is the way to nail Team Clinton without dragging in the Occupier in Chief.

I think Hillary needed a new excuse to justify another extended vacation.

Comey must have been worried about leaks from within… this is becoming Watergate like, except for the part where the press investigates it and breathlessly reports it. They have to, I guess, but their hearts not in it.. Hillary must be seething over Weiner’s texting phone… wouldn’t want to be on her security detail tonight..

At the end of the Watergate scandal Nixon resigned. That would NEVER happen with any democrat, particularly one named Clinton.

Isn’t this a fun time to own a blog, Jeanine? The problem is that the same people who vote for Hillary are just as committed to her as the Trump people are to him. They are going to vote for her even if she is in jail.

Next up? Tim Kaine.

Fortunately, there are more of us this time around.

This is way beyond watergate. That was a political breakin supposedly to protect the nation. This is about traitorous behavior to sell out the nation.

Let’s predict:
I pick Huma sending military Intel to the hood via SnapChat.