Clinton Pulls Ahead in Latest Poll

In the latest WashingtonPost/ABCnews poll Clinton has pulled ahead of Trump by 12%, with Clinton’s support at 51% and Trump’s at 39%.  When Gary Johnson and Jill Stein are included Clinton is still up 10%, 47-37%. When asked if the candidates are qualified to be President, 37% said Hillary was not qualified, and a whopping 64% said Trump was not qualified. 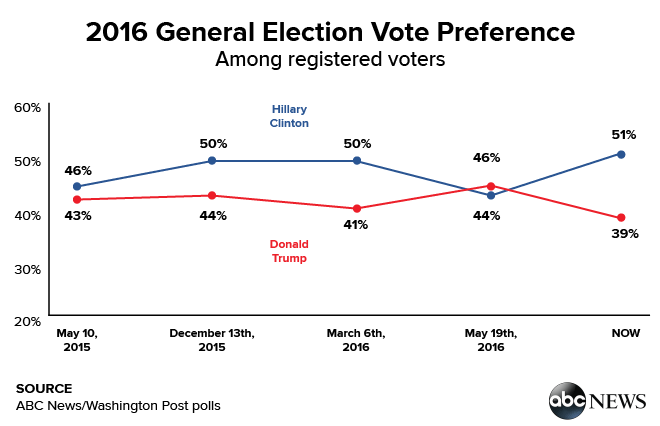 Roughly two in three Americans say they think Trump is unqualified to lead the nation; are anxious about the idea of him as president; believe his comments about women, minorities and Muslims show an unfair bias; and see his attacks on a federal judge because of his Mexican American heritage as racist.

A slimmer majority say they disapprove of the way Clinton has handled questions about her use of a personal email server while she was secretary of state, and half of Americans are anxious about the prospect of a Clinton presidency, underscoring the historic unpopularity of the two major-party candidates.

Some voters feel so strongly that we need a change in Washington they will vote for Trump even though they disapprove of him.

There are only 18% of voters who will consider a third party candidate and 78% who will not.

Overall it seems voters don’t particularly like or trust either Trump or Clinton but they fear a Trump Presidency more than they fear Hillary in the White House.  BUT Hillary’s support is far more shaky than Trump’s. Trump’s supporters are much more likely to go to the polls.  While Hillary has a huge lead with Hispanics, only 44% of them said they were certain to go to the polls. Among white women there is less support for Trump than there was for Romney but fewer say they will definitely vote.  With both candidates being so unpopular, this could be an historically low turnout which should favor Trump.

This can’t be right! The Trump cultists insisted that he would attract Dems, blacks, Hispanics, and donors. And articulate consistent, coherent policy positions. And start acting presidential.

Soon after the death of Muhammed in 632 AD, Muslim forces poured into Syria and Palestine in a plan formed by Muhammed prior to his death. The Byzantine Emperor tried to stir the residents to reside but they were unwilling to fight for the most part due to unwillingness to devote needed resources to the army. They had also been lulled in passivity when the Emperor had forced all citizens to turn in their weapons. Does any of that sound like the U.S. under obama? it will be worse under Clinton.

Any vote other than for Trump, or a non-vote, helps elect Hillary who has promised to increase “refugee” importation by a factor of 1,000% and raise taxes. We know her espionage crimes and disdain for the military so our national defense will plunge further in the face of world-wide militant Islam. #NevrHillary!

As far as fundraising Trump is doing fine. He had a fundraising email where in 12 hours he more than doubled the money expected to come in.

Don’t believe the biased media or reports from the establishment.

Cherry picking your polls is unhealthy. The average has Hillary up by seven, but that’s not Trump’s main problem. The problem is that all the polls have the electorate moving toward Clinton and away from Trump. http://www.realclearpolitics.com/epolls/2016/president/us/general_election_trump_vs_clinton-5491.html

Well, yeah, his MAIN problem is that he is pretty much the worst imaginable candidate.

That’s why it will be a very low turnout. So few like either one of them.

Sounds a lot like what Romney supporters were saying in 2012. Wasn’t true then, isn’t true now.

The polls in the UK had Briext losing also. The polls had Sanders within 2% of Hillary in California, he lost by about 13%. The polls had Obama losing to Romney in ’12.

The establishment owns the media, the politicians, and the polls. They own your job, your health insurance, your doctor, and your retirement. They own Ed Gillespie and the power company too. And they own Hillary.

ABC and NBC, McConnell, all did a number on Trump this morning. The queen got a pass. The establishment is not going to give Trump any money. And, as usual, Trump supporters forgot their wallet. The establishment will always own the Republican Party because the base will never financially support a candidate.

But, one thing the establishment doesn’t own yet? Your vote. Yet.

I’m not seeing where the polls showed Romney winning in 2012, http://www.realclearpolitics.com/epolls/2012/president/us/general_election_romney_vs_obama-1171.html I might feel better if Trump had ever been ahead in even one poll, http://www.realclearpolitics.com/epolls/2016/president/us/general_election_trump_vs_clinton-5491.html

Just goggle polls that showed Romney ahead of Obama

The complete and full list of Hillary Clinton’s charitable deeds over her many years.
..
.

Storytime!!!!
Have been wearing Trump stuff for 11 months now. Also bought t-shirts and hats from Carson, Cruz, Rubio, and Sanders. Have worn those too.. And talked to lots of people..
I have yet to meet a single person who either said that they supported or would vote for the Hildebeest..
In 11 months not a single person. I am truly amazed..
And I know of 7 people in various locations in the US who say the same thing. All of us are amazed.
So when I see these polls saying that the Hildebeest now has a 110 point lead over the Donald, I tend to be a bit skeptical

that’s because we are scared of you. When we see you coming, we turn the other way. Have you not noticed that most of your neighbors avoid you. We know that you are armed and ready to blow.