Why the Colgate-Wagner settlement works for Virginia Republicans

As we reported live on Saturday, the appeals and controversies from the 2nd Congressional District were ultimately dealt with by the Republican Party of Virginia’s State Central Committee endorsing a compromise arrangement reached by the competing candidates for 2nd District Chairman. The settlement between Curtis Colgate and Sen. Frank Wagner (R-Virginia Beach) resulted in Colgate being certified as 2nd District Chairman in exchange for leaving the results of the Virginia Beach mass meeting undisturbed.

Through much of the day, the two sides were engaged in intense negotiations facilitated by the ad hoc appeals committee led by 10th District GOP Chairman John Whitbeck, with help from RPV Executive Director Shaun Kenney. The first deal that Wagner’s team proposed turned out to be a non-starter. Under this first proposal, Rep. Scott Rigell (R-VA02) would put forth a name for 2nd District Chairman, and if both Wagner and Colgate could agree on that person, then he/she would be named Chairman and the Virginia Beach mass meeting would be allowed to stand. Otherwise, the appeals process would pick back up in December, after the election. Colgate’s advisors and others on the State Central Committee urged Colgate to reject this proposal, which he did. Hours later the final proposal (which, incidentally, mirrored terms of a compromise proposed by Colgate supporters months ago) was agreed upon before being brought to the floor of the SCC meeting by Chairman Pat Mullins himself. 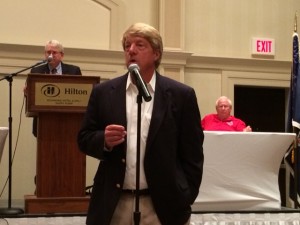 Supporters of Sen. Frank Wagner’s bid for the chairmanship are understandably upset at the outcome, but Sen. Wagner and his advisers undoubtedly saw the writing on the wall. The compromise they had previously rejected became much more palatable when the Fauquier and Campbell county appeals votes came down so decisively in favor of a stern interpretation of the requirement that only Republicans can participate in internal Republican Party elections. (For the record, the final tally on the Fauquier appeal was 53-24 in favor of upholding the 1st District’s ruling, and 49-28 in favor of requiring a re-run of the Campbell County mass meeting). So, Wagner was faced with certain defeat if the vote came up.

The problem with the settlement, as has been hashed out in various Facebook threads, is that leaving the Virginia Beach mass meeting undisturbed does nothing for the hundreds of people who allege the meeting (including the election of Ken Longo as Virginia Beach Chairman) was conducted improperly. Some folks from Virginia Beach feel sold out by Colgate, and by the State Central Committee. This criticism is entirely understandable, and is what was behind the relative handful of “nay” votes among State Central members.

However, as I’ve written elsewhere, our job on SCC is to serve a number of competing interests—not just the interests of ensuring the most just outcome in every single contest. There are no guidelines or restrictions in the Plan as to how SCC may remedy violations. The only guidance provided by the Plan is that the SCC has final say in all matters affecting the efficiency of the Party organization, or the success of the Party. Robert’s Rules is similarly open-ended in this regard. Basically, it’s a judgment call, where numerous factors in addition to fairness and justice must be considered, including continuity and precedent, the effect on our candidates, the effect on public perceptions, and maintaining consensus and harmony among the body’s members, among others. These considerations must be balanced to reach the outcome that is in the best interests of the Party.

In this instance, the State Central Committee felt the benefits of the settlement included getting the whole controversy behind us (and out of the newspapers), and getting functioning party organizations and Victory offices working again. Taken together with the votes on the other appeals, SCC also succeeded in sending the strong signal that cheating by recruiting Democrats to participate in Party elections is not a profitable strategy; we recognized that adding Virginia Beach would only marginally improve the strength of that message. We also avoided potential litigation; even though there is very little chance such litigation would be successful, that doesn’t mean Wagner’s folks wouldn’t have given it a very costly try anyway. Finally, it is my sense that the body felt that rejecting this settlement would send the wrong message about reconciliation and unity within the Party, at a time when we should all be standing shoulder-to-shoulder behind our nominees.

As I reminded folks on Saturday from Fauquier and Campbell on both sides, it’s easy to get caught up in the personal local battles, but at the State Central level these kinds of disputes cannot be about individual disputes or picking specific winners and losers. (Indeed, there is a good chance that the re-run processes in Campbell and Fauquier may ultimately yield the same victors; if so, I will welcome the opportunity to work with those people, even though we were on the opposite side of the issues this past weekend). Instead, it has to be about the larger issues around what’s best for the Party as a whole. That’s cold comfort for those left without redress of their grievances. All I can say to those folks is that I understand the disappointment that we couldn’t get to a 100% solution, but in balancing all of the factors, the State Central Committee reached a conclusion that was best for the Party. That’s what we’re elected to do.