For full disclosure, I worked for Del. Berg as his legislative assistant for ten months last year. As a result, I have been watching his primary challenge by former supervisor Chris Collins with interest. Last night when I was crawling through campaign finance reports, I found some interesting things.[read_more]

Chris Collins fundraising haul was pretty impressive raising over $28,000 in less than two months, however the devil is in the details.  The nice thing about VA transparency laws is that we can see everyone who donated over $100 to a campaign.  This report has a number of names that jump out because of their known opposition to Republican candidates.

This list includes some of the strongest opponents of Republicans in the western portion of the 10th Congressional District. Mary Daniel was the Democrat nominee to run against Dave LaRock in 2013.  LaRock defeated her by over 2,700 votes. William Daniel is her husband.  Vince Dibenedetto was a Republican who was removed from the Republican Party for publicly and actively opposing Republicans in the November 2013 election.  Roberta May is the wife of Joe May. Joe May is the former Republican delegate from the 33rd District. Following his primary defeat, he refused to support the nominee, and then believed ran as an independent against current RPV Chairman John Whitbeck, in a state senate special election.

While it is important to build coalitions when campaigning and governing, reaching out to Democrats to win a Republican nominating contest should be alarming.

A Democrat candidate, and two prominent former Republicans who undermined the party are supporting Chris Collins primary challenge.  While Chris Collins is telling people he is conservative, Republicans should ask what it is about him that has won the support of those who oppose and undermine the Republican Party.

If Chris Collins can get financial support from active Democrats and vocal Republican opponents, what other support is he quietly gathering from those who oppose the party?  If Mary Daniel and Joe May believe Chris Collins is worth supporting, how can he be relied on to fight for Republican principles in Richmond?

Mark Berg is a hard worker who deserves to win the Republican Primary over someone who is actively courting the support of Democrats to win a primary.

Update: After posting this article, I was alerted to another relevant bit of information about Collins support. Collins sure is doing an impressive job inspiring Democrat support. 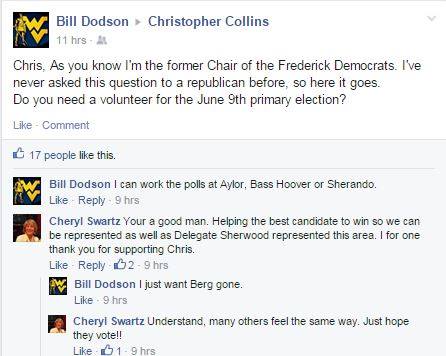 I’m also happy to report that the teaparty lost huge in the Caucuses and primaries of Frederick County. A TOTAL REJECTION BY THE REAL GOP!!

Personally I am happy that Mark Berg LOST in the 29th of va.
I love the shout out you all gave to me on your blog. I was more than happy to help Chris Collins beat Berg.
Bill Dodson. former Fred. Co.Democratic Party Chairman.

Willie, in all fairness, getting two $150 checks from two Democrats — Mary Daniels and her husband — does not rise to the level of rallying support from the democrats.

Both Chris Collins and Mary Daniels are well respected attorneys who practice before the same courts. Professionally, they are colleagues. It’s understandable that Ms. Daniels would contribute to his campaign, given that there is no democrat seeking the office. [Go ahead, insert favorite lawyer-shark comment here.] As to the other two donations — not Joe May but his wife, and Vince
DeBennedetto, neither one are Democrats. At best Roberta May can be called
the wife of an Independent. DeBenedetto, after being denied the opportunity to file for membership on the Winchester committee, was still allowed to vote in the
10th District 2014 party canvass, so it’s debatable whether he actually is, in practice, removed from our party. Neither one can be called Democrats even under the most creative and most alcohol-fueled reading of the party plan. So what’s left is a single household writing two checks and one vocal democrat posting anti-Mark statements on Facebook.

BTW, I’ve known both candidates for a number of years. I sent Mark a modest campaign donation in 2013 and I nominated Chris for Red Bud Supervisor at the special meeting to fill the vacancy in 2009. Both candidates are O.K. dudes in my book. My point in this posting is that there is nothing to suggest that Chris Collins is soliciting anything from the democrats, and the accusation is way too much of a stretch.

>>The vocal democrat.
And yes I’m happy about Bergs defeat!

This race will likely come down to the wire with very little margin on either side. Collins will likely do very well in Winchester and the eastern part of the county with Dr. Berg doing well in Warren County. I suspect the battleground may be the rural area west of Winchester.

That being said, most of Dr. Berg’s troubles in this race could have been prevented with better communication from the start of his term. This race should not be close. The reasons for Berg’s trouble can be summarized below:

Dr. Berg does enjoy strong tea-party support but that may not be enough.

Unfortunately Dr. Berg never enjoyed any support from the local FCRC. It’s beyond belief how he was treated. They never supported him and yet he beat Beverly Sherwood. The Chris Collins grousers have one thing in common. They want Beverly Sherwood back for some strange reason.

The autism bill has been explained by both Dr. Berg at his town halls and letters he has sent to his constituents and several letters to the editor explaining his positions and his votes. If you cannot understand that his votes were in the best interest of everyone then you must be willfully ignorant of the situation and desire to remain in that position.

I haven’t noticed any loss of support from the country sheriff or the city sheriff. They are the ones that count.

Fair points about the committee but remember support needs
to be earned as well. Dr. Berg had two years to gain widespread support from both
committee members and other local elected officials. For the most part, he failed on both counts.

I was not trying to take a specific position with Dr. Berg’s stance on autism. I just made the
point that it has impacted his campaign. Autism activists vote.

All three Republican sheriffs in the district support
Collins. That is a pretty big deal. (Winchester, Frederick, Warren)

I am a life long Stephens City citizen, born and raised. I have to know you if you are politically active. Bill Dodson,

I guess that about sums it up. Christopher Collins must go.