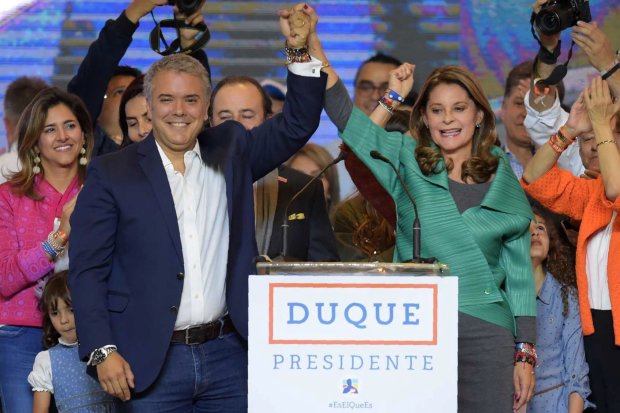 Not well reported by the left wing media (aka the NY Times, Washington Post, CNN/ABC/NBC/CBS) is the fact that the Republic of Colombia elects a right-wing populist named Ivan Duque.  Duque a former member of the Colombian Senate, was elected in a landslide yesterday over Bogota Mayor Gustavo Petro. Duque was elected for many reasons. Liberal outlets such as NPR are reporting that Duque was elected was because of the smoldering fight with FARC (Revolutionary Armed Forces of Colombia), which had supposedly ended in 2016 but remnants of FARC are still fighting.

However what NPR and other liberal outlets are not reporting is the fact that Duque won in the rural regions of Colombia for a totally different reason.  The fact is that many of Colombia’s poor voted to reject socialism as they have seen what socialism has done to Venezuela and they want a better life for themselves.   Teresita Alvarez lives in one of the slums of La Sierra – and she voted for Duque because “Petro could bring Colombia down – he could make it like Venezuela. No one here wants that”.   Builder/contractor Alex Gutierrez said: “We’ve seen the problems with Venezuela”.  We don’t want to risk that happening here”.  https://colombiareports.com/iconic-medellin-slum-votes-duque-out-of-fear-of-another-venezuela/

Wherever socialism is tried – socialism fails.  Venezuelans are now going without food, medical care, gas, and pretty much every other essential of life because of Chavez and current President Maduro.  Venezuela has hyperinflation of 33%. Venezuela’s oil production is plummeting because they can no longer afford the parts to fix oil rigs. People are fleeing Venezuela – and where do they go?  Colombia. And the Colombians don’t want what the socialists are selling.

For anyone who has ever been to Caracas, it was a bustling city.  I went there once in the mid 80’s and it was a great place to visit, do some shopping.  Beautiful city about 20 miles inland from the ports – bustling with street vendors and people selling great local fare.  Had one of the best times of my life there – bought a classical guitar locally made while I was in Caracas. Now thanks to socialism and the despair, Caracas is little better than a war zone – and how did the current regime respond?  By taking away the rights of gun owners – so now the citizens of Venezuela are literally slaves of a government which has turned a bustling rich city into the poorest of the poor, and destroyed the country and the welfare of their citizens as well.

Interesting how the poor of Colombia do not want what Maduro is selling – yet the faux educated of the American left are begging for this through their hero of the month, Bernie Sanders.

Now to get the District of Columbia to follow!

I am greatly heartened by the right-ward tilt of election results in Colombia, Italy, Hungary, Poland, Brazil, India, Israel, and so many others that the world may indeed have a bright future.

Whatever wakens the power-hungry decadent global liberal order is to be applauded.