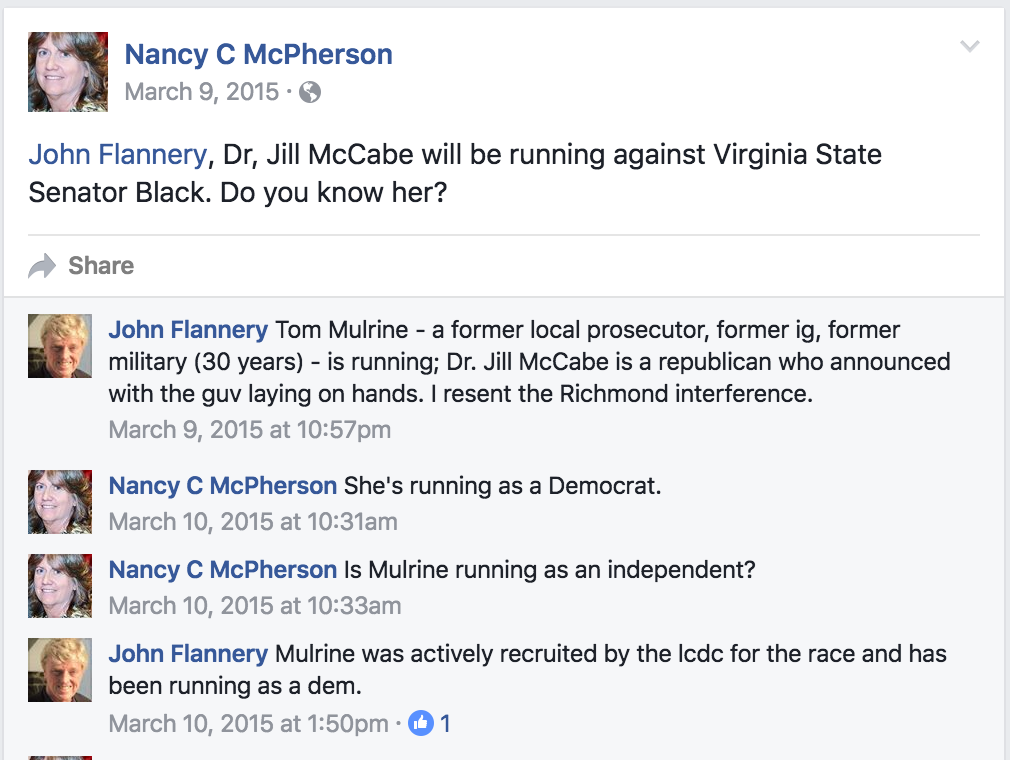 It’s understandable that John Flannery would assume that Dr. McCabe is a Republican. In 2012, she voted in the Republican presidential primary, which means she either supported Ron Paul or Mitt Romney for President.  Or perhaps she just really doesn’t like Obama. Despite being rather wealthy, McCabe has never given a dime to any Democratic candidate or the Democratic party.

Dr. McCabe is a pediatrician which might imply that she is pro-life.  She is certainly not pro-public schools.  Both of her children attend Loudoun Country Day School.  ‘Country Day School’ is always code for ‘rich, elitist, school, that you probably can’t afford.’ Loudoun Country Day School is no exception, with tuition at $24,985.  Let’s just round that up to a cool $25,000 a year.  Virginia Universities don’t charge that much!  Her children are now in high school…that’s a lot of money to spend on tuition for 12 years for two children. And yet not a dime for any Democratic candidate.

In her bio Dr.McCabe says she attended a school very much like Loudoun Country Day School:

Jill chooses to volunteer her time on the Board largely because of the great impact that attending a school very similar to LCDS (Loudoun Country Day School) had on her personal academic career. As a Pediatrician and mother, she values the importance of childhood growth and development, and is happy to be a part of a school that fosters them.

From that we can only assume that the wealthy Dr. McCabe does not think that public schools foster childhood growth and development. Interesting.

I know that Governor really wants this woman to be the Democratic candidate for Senate in the 13th Democrat but why?  She appears to be a rather elitist Republican.

[…] In 2015 Governor McAuliffe handpicked Jill McCabe, wife of the current Acting Director of the FBI Andrew McCabe, to run against Dick Black in state senate district 13.  Some of you may remember that the Democrat Party of Loudoun County had already chosen Colonel Tom Mulrine to represent them against Senator Black.  McAuliffe had other ideas and he installed Jill McCabe without allowing a primary or any discussion. Some Democrats in Loudoun took offense at the Governor’s heavy-handed approach to choosing their candidates.  We reported on the story here.  […]

[…] 2015 Democrats in Loudoun County were supporting Colonel Tom Mulrine to be their nominee against Senator … However, Governor McAuliffe was having none of that and inserted Jill McCabe into the race. […]

[…] was working hard to be the nominee and was circulating his petitions to get on the ballot when Governor McAuliffe decided Mulrine could not run and put Dr. Jill McCabe into the race in his place. Despite spending $1.6 […]

[…] the bloggers at The Bull Elephant are so worried about Dr. Jill McCabe’s challenge to Sen. Dick Black, that, instead of waiting […]

Who is Paul Rand?

Oops, thanks for pointing that out. I have fixed it.

Barbra Jill McCabe, a top pediatric emergency physician and manager,
helped show McAuliffe around the pediatric ER in Loudoun, where a child
screamed behind a glass partition. Regardless of the different opinions
on how to improve America’s health system, she said, “I think expanding
care for the folks who need it has to be part of the solution. . . . I’m faced with patients every day who are struggling because they don’t have that access.” She said that with more patients on Medicaid, her emergency room would be less busy, which would benefit the children they treat.

Get ready for another Medicaid fight.

Ah yes, it’s ALL about expanding Medicaid. Little else matters to the Governor.

The RPV needs to be checking to see who else is running around the state. This is looking like the beginning of an upcoming national backed strategy instead of just a Terry personal pick.

Where one does Dominion Virginia support?

Are there any other practicing doctors in the GA?

Del. John O’Bannon, for one. I suspect there may be others I’m forgetting.

LG Northam, Del. Garrett and Del. Stolle are all doctors along with Del. O’Bannon.

The Democrats have some nerve saying the GOP has a closed process after this! It was a stretch to say a Firehouse Primary that had over 13,000 voters in it was a “closed process” but considering one guy can just pick who gets to run for their process just doesn’t pass the smell test!

Maybe Mulrine should run as a third party just to make a point. That would help Black at any rate.

Flannery is right when he said the governor laid hands on her because that’s how the Democrats do it. They anoint their candidates and poor Mulrine gets kicked to the curb. Tom Mulrine had been campaigning for weeks, making the rounds as part of the Democratic slate only to have McAuliffe pull the rug out from under him. How embarrassing is that?