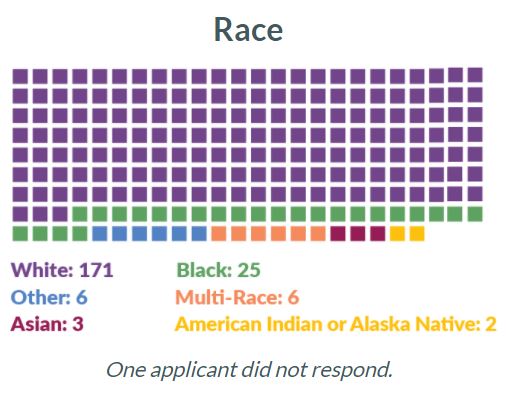 Commission Applicants Too White, Too Male, Too Rich

You can count on progressives and the media to make every issue under the sun about race â€” and for Baconâ€™s Rebellion to call them on the carpet for it. Hereâ€™s the latest example. It turns out that, in the minds of some, too many of the people volunteering to serve on Virginiaâ€™s Redistricting Commission areâ€¦ you guessed itâ€¦ white.

Of the 214 people who have applied so far, with a week to go, only 25 are black, seven Hispanic, three Asian, six multiracial, and two American Indian, according to a count made by the Virginia Public Access Project. By my reckoning, that means about 82% of the applicants for the eight citizens positions in the commission are white. Three quarters are male.

Some are not happy with this disproportionate display of civic participation, reports the Richmond Times-Dispatch.

I’m not the one to say I told you so but when it comes to the redistricting commission, @PriceForDel95 tried to tell yâ€™all,â€ tweeted Del. Lashrecse Aird, D-Patersburg. â€œOld. Rich. White. Men. But that seems to be part of the Virginia way.â€

Sen. Ghazala Hashmi, D-Chesterfield, said she is â€œreally concerned about the lack of diversity in the VPAP data,â€ especially by the lack of Asian representation.

The citizen representatives havenâ€™t been picked, mind you. First, Republican and Democratic leaders in the state Senate and House of Delegates must cull the applications and provide four lists of 16 applicants each. Then a panel of retired judges will pick the eight citizen representatives by selecting two names from each list. Legislators have directed them to â€œensure the citizen commissioners are, as a whole, are representative of the racial, ethnic, geographic and gender diversity of the commonwealth.â€

It hasnâ€™t seemed to bother anyone that the applicants skew leftwards in their party affiliations. Eighty-six described themselves to VPAP as Democrats, while only 40 said they were Republicans. Seventy-three listed no party, nine listed other, and six did not respond to the question.

Regionally, 74 applications originated from Northern Virginia, 54 from the Richmond region, and 39 from Hampton Roads. As of Friday, there were none from Southwest Virginia and only six from Southside. The regional disparity hasnâ€™t sparked any negative commentary yet either.

Many volunteers are older and more affluent. The RTD article suggests that retirees are more likely to have the freedom to devote perhaps 60 to 90 days to a task that will compensate them only $50 per day.

But the racial bean counters never sleep, and they never miss a chance to complain. For my part, I feel certain that the politicians and ex-judges will select citizen representatives that â€œlook like Virginia.â€ Whether we get the best candidates after slicing and dicing the applicant pool by race, ethnicity region, gender, and party affiliation is a different question altogether.