Since 1984 the stock market has accurately predicted the outcome of the Presidential election. If the market is down, a new party wins.  If it’s up, the incumbent or his party wins. The S&P 500 is down 2.2% since the end of July. That predicts a Trump win. More here.

American University Professor Allan J. Lichtman has predicted Presidential elections correctly for 30 years. He uses a series of questions that accurately predict who will win. He says it’s Trump.  More on the professor’s system here.

The Redskins Rule says if the Redskins win their last game before the election the party of the incumbent President wins, if Redskins lose, the opposing party wins. The Redskins last game ended in a tie. Does that mean that neither candidate will get the needed 270 electoral votes? I think that’s entirely possible. It would be a fitting end to this election.

Baseball is also involved in predicting the outcome of the election. The last 8 times the World Series has gone to 7 games, and the American League wins, the White House goes Republican. If the National League wins in the 7th game  a Democrat wins the Presidency. 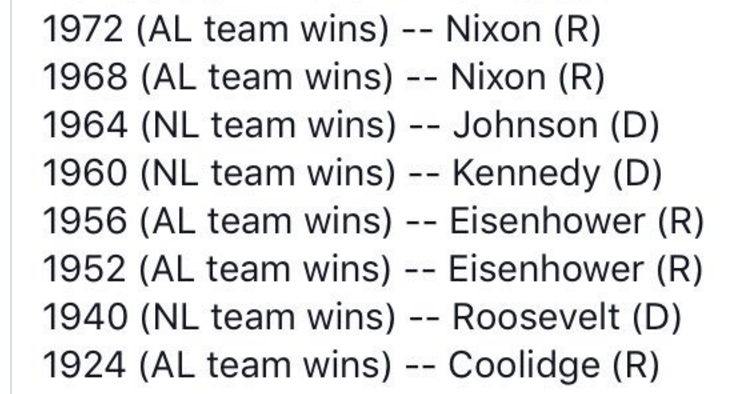 Since the Cubs won in the 7th game, that predicts a Clinton win.

Halloween masks are another predictor of who will win the election. More Trump masks were sold this year than Hillary masks, indicating a Trump win.

Vigo County Indiana has voted for the winner of the Presidency in every election since 1956.  Watch the results in Vigo on election night to see who wins the election.

Every year since 1940 children have voted for President through Scholastic News and every year they have been correct.  This year children across the country say Clinton will win with 52% of the vote.

Unfortunately I can draw no conclusions from these varied predictions.