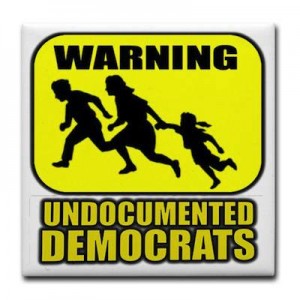 Rob Martin is a professional economist and semi-regular guest contributor at The Bull Elephant.

The so-called “immigration reform debate” ignores the real issue.  Let’s start with what most people can agree on.  Virtually everyone favors legal immigration, although we could debate the details.  Most people also agree that we are not going to deport all 11 million illegal immigrants that are here now.

What to do with those here now

This is where reasonable people may differ.  I believe that the best approach would be to require those here today to register immediately with the government.  They would have their picture taken and be fingerprinted then issued a permit to continue to reside here.  Since these people came here illegally, jumping the line on millions of others waiting to be admitted legally, they should be denied citizenship for some period of time and pending good behavior.  Felonies would mean deportation.  During this period, say ten years, they would be expected to work and pay taxes.  Public benefits could be limited.  While we can debate whether this is too draconian or too lenient, or if another approach would work better, the key is that citizenship (which is largely the right to vote) is denied for a fairly lengthy period of time.

What to do to discourage others coming illegally in the future

Some think we need a higher wall to prevent future illegal immigration.  Given that a significant number (40%) of illegal immigrants simply overstayed their visas, I think we need another idea.  It seems to me that the obvious way to discourage future illegal immigrants is to change current laws and procedures to simplify and expedite the deportation of those who come here illegally in the future. While there are any number of ways to do that, I would suggest that anyone unable to demonstrate their right to be here within 48 hours after being detained by the authorities as a suspected illegal alien would be summarily deported. State and local authorities would by authorized to assist in enforcing these laws, detaining those suspected of being here illegally and handing them over to the federal authorities.  If any of those deported feel that the deportations were unjustified, they could make their case to the U.S. Embassy in their home countries.  Errors will be made and so a system could be set up to indemnify any deported unjustly.

The “Be Charitable” argument

Some will disagree with these points, arguing that we should allow unlimited immigration as a charitable measure for the billions of people that would benefit by moving here.  Let me point out that virtually open borders would not be generally beneficial to either new immigrants or current U.S. residents, because the influx of unskilled workers would quickly depress wages for those with limited skills to near third world levels.  Minimum wage laws would guarantee that these millions of people would work off the books on jobs where they are paid by cash or check without benefits or health care.  Lawn care, day care, housecleaning and such would become much cheaper and those with good jobs could have full time servants.  Those eligible would drop out of the labor market, opting for disability, food stamps or black market jobs.  Assimilation would be difficult and the schools would be overrun with non – English speakers.  The costs of various welfare programs would soar, leading to irresistible pressure to curb those benefits.  As Milton Friedman said, you can have a welfare state or open borders, but not both.