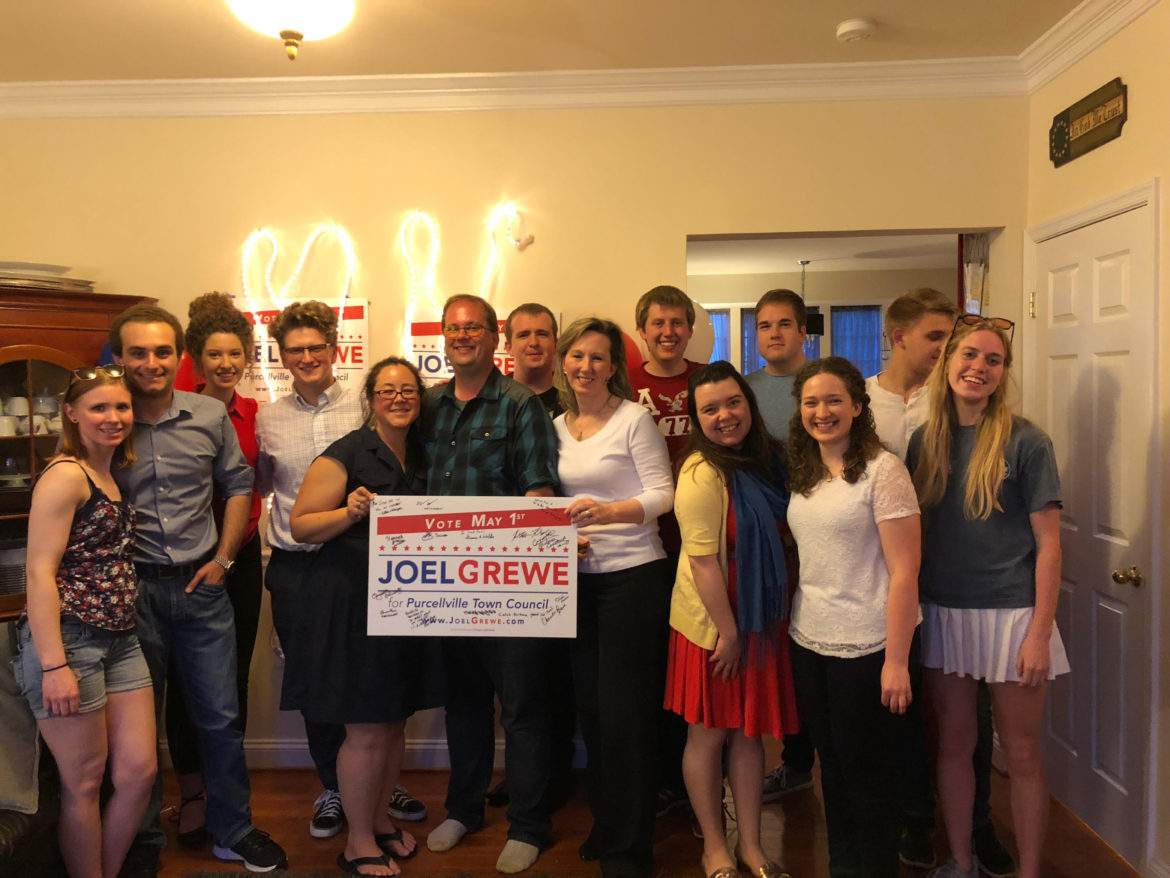 For the past 70 days, I’ve had the privilege of leading a small but dedicated team who set out to bring honest leadership to the Purcellville Town Council. Purcellville has been in the news for all the wrong reasons, and a fresh face in local leadership has been long overdue. The town where I grew up deserves clear standards and accountability in its leaders, as opposed to a municipal soap opera worthy of NBC’s “Parks and Recreation.”

5,114 doors and $7,646 later, conservative outsider Joel Grewe was elected, and Loudoun County defied the “Blue Wave” for the second time.

Joel’s success proves how effective a candidate can be with the right message, the right strategy, and the right team behind them. When we launched his campaign in February, Joel was relatively unknown to Purcellville, and at a steep disadvantage in terms of name recognition. We knew from the get-go that it would require an aggressive field program in order to win, and that’s exactly what we delivered. This was only possible thanks to the A-Team of activists and grassroots volunteers that coalesced behind Joel.

Congresswoman Barbara Comstock was an important part of that A-Team. Immediately after Joel announced his candidacy, she reached out to the campaign personally and pledged whatever assistance we needed. She and her campaign team were an invaluable resource for Joel and for our team. She proved once again how deeply she cares about every corner of the 10th District. Comstock is a team player and campaigned tirelessly for a movement conservative in this election.

Shak Hill stands in stark contrast. Even though Joel had the official endorsement of the Loudoun County Republican Committee from day one, neither Joel nor I received a single phone call, email, or text from either Hill or anyone on his staff. Any assistance at all would have been highly appreciated. Instead, Hill, an individual vying for the Republican Party to send him to Congress, was apparently unable to find the time to even make contact with our campaign. Hill claims to stand for fiscal responsibility and transparency, two principles on which Joel’s platform was hinged upon. But if he won’t support these principles when someone else gets the credit, he has absolutely zero business representing us in the House of Representatives.

Anthony DeFazio is the former Executive Director of the Loudoun County Republican Committee and a resident of Leesburg, Virginia. Follow him on Twitter: @anthonyjdefazio.

What a load of horse dung. Comstock is out of site, she has never had a town hall, she can’t speak with complete thought. She sends out the most nonsensical crap in her e-mail.

Great article Anthony! We’ve seen a lot of progress in Loudoun since the beginning of the year and Congresswoman Comstock has been there every step of the way with campaigns, the local unit and the grassroots. We are proud of Joel and the team he put together.