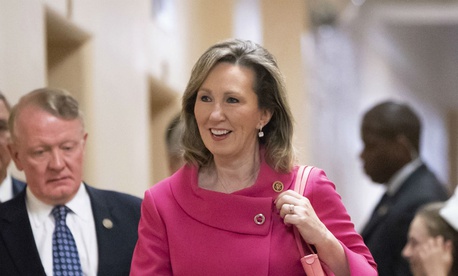 Congresswoman Barbara Comstock (VA10) has led the charge to reinstate federal pay raises which Trump wanted cancelled.  Congressional Republicans have tentatively agreed to on a 1.9% pay raise for federal workers. About 15% of federal employees live in the Washington area.  From the Washington Post:

“Thanks to Barbara Comstock’s tireless advocacy, there is an agreement in place on pay raises,” Graves said in a statement to The Washington Post. “This wouldn’t be resolved without her help, or without President Trump’s booming economy.”

Comstock said in an interview she lobbied Vice President Pence for a raise for the civilian workforce, and he was receptive. But the White House, citing budget constraints, never reversed its opposition.

I’ve been making the case for the rank-and-file side,” Comstock said. I’m confident we will get it. We need to retain talent in the federal government.

I am pleased that an agreement has been reached to provide our federal employees with the raises they have earned and deserve.  This is an important complement to our providing the largest pay raise to our military in almost a decade and it  is a strong sign of our respect and support for the essential work done by our federal employees. I appreciate the support of Chairman Frelinghuysen and Chairman Graves in working with us to achieve this important priority,” said Congresswoman Barbara Comstock (R-VA).  “With our strong, booming economy, it is essential that we keep our federal salaries competitive so we attract the talent in the civilian workforce that is needed for our national security, homeland security, law enforcement, and medical research jobs and more.  The pay freezes that occurred for 3 years during the Obama Administration hurt our federal employees and we will continue fighting for competitive compensation ! and work with the coalition of Members throughout the country who represent our federal employees  5 out of 6 of whom live outside the Washington Metropolitan area.”

“NARFE appreciates the Congresswoman’s hard work and dedication to advance a modest pay raise for federal employees in 2019. While her efforts were supported by a bipartisan group of members of Congress, Representative Comstock’s leadership on this issue should be commended. A modest increase in pay not only acknowledges America’s hardworking, middle-class federal employees, but also serves as an investment that will help maintain and strengthen the federal workforce and align it more competitively with the private sector,” commented NARFE National President Richard G. Thissen.

August 30th–  I contacted White House immediately to let them know of my strong opposition and relayed my concerns about how this negatively impacted our quality federal workforce.  I was the first Member of Congress in the local delegation to oppose this proposed pay freeze.  I spoke with the Appropriations committee and House leadership to have the House agree to the Senate increase in pay if the White House does not reverse their decision.

Barbara Comstock has saved the raises for our federal employees.  What has Wexton done for us?  Oh yeah, she increased our taxes and our tolls. Vote for Barbara Comstock, Don’t get Wexton’d.