The NRCC announced earlier today that Del. Barbara Comstock (R-McLean) is “on the radar” for the organization’s “Young Guns” program, while Nancy Pelosi comes to town to campaign for Democrat John Foust.

The NRCC’s Young Guns program is something that virtually every Republican challenger or candidate for an open seat aspires to, as it means that the party’s national campaign team has identified you as a candidate with a better-than-average shot at winning against the Democrat in a tough district. NRCC’s Young Guns tend to be seen as “rising star” types of candidates

Those candidates designated for inclusion are given challenging benchmarks to meet on an array of measures of campaign health, such as fundraising, organization, digital presence. Candidates are promoted in status when they meet those benchmarks. Along the way, the candidates and their teams receive tons of training and advice from NRCC staff. Successful completion of the benchmarks tends to result in a great deal of funding, as it tells the potential donor that their money won’t be wasted.

To be clear, this is not the same Young Guns—YG Virginia, YG Network—run by Eric Cantor as a 501(c)(4) and involved with the Recent Unpleasantness. It may be true that Cantor and his team have something to do with Comstock’s selection in the midst of the nomination process, and the reader is free to draw conclusions from that. But before you conclude that the NRCC program is just for “establishment hacks,” consider that they are supporting a good number of “outsider” type candidates, including for example, Alex Mooney and Niger Innis.

Regardless of how this came about, it is definitely a plus for the Comstock campaign, and something that is likely making the Democrat candidate, John Foust, take note.

And what’s Foust up to? He’s having a fundraiser today with none other than Nancy Pelosi. If Comstock gets the nomination, she’s going to need every penny the NRCC can help her with…this is going to be an expensive race. 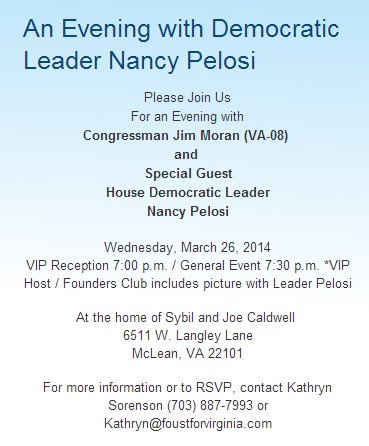 […] in March we reported that Comstock had been tagged as being “on the radar” for the NRCC’s “Young Guns” program, and today she has formally been added to […]

They would have to pay me to attend an evening with Pelosi and my current Congressman, Jim “Moron”…