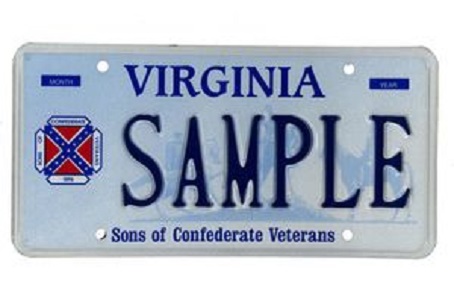 The Sons of Confederate Veterans is taking the McAuliffe administration to court over the Governor’s unilateral decision to stop printing plates bearing the rebel flag, and to recall those currently issued.[read_more]

As was widely reported a couple of weeks ago, following a Supreme Court case involving the State of Texas that held states could deny requests to issue plates with offensive images like the Confederate flag, McAuliffe ordered the Virginia DMV to stop issuing the special Sons of Confederate Veterans plates that feature it. The Governor further ordered that those plates currently on the road be recalled.

The Supreme Court’s reasoning in the Texas case was that state-issued license plates could be considered to be state or public speech, and not merely an expression of an individual’s or a group’s private speech protected by the First Amendment. According to the Times-Dispatch, the Sons of Confederate Veterans allege that the procedures in Virginia for issuing a special plate are qualitatively different than in Texas, and that the same logic would not apply here. It is unclear why that might be the case, but SCV is also arguing (possibly with merit) that the Governor overstepped his authority in issuing the orders. It wouldn’t be the first time for that, of course.

One bright spot in this: as it turns out, Virginia does not issue these plates by choice. Back in 1999 when SCV first applied for the plates, the General Assembly allowed the plates to be issued, but without the image of the flag. It was only added under duress, as a consequence of a legal challenge that culminated in an order by the 4th Circuit Court of Appeals to include the flag, on free speech grounds. We will never advocate for limits on free speech, and as we said yesterday, we do not quarrel with those who claim a legitimate heritage with the rebel flag. But we hope that the Texas case gives the General Assembly the legal room to do the right thing should it be shown that McAuliffe exceeded his authority on this question.

One even brighter spot? Since the plate’s inception in 2002, only about 1600 of them have been issued. That means that even if they are all still currently in circulation, only 0.0003% of the over 5 million licensed drivers in Virginia have this plate.

Confederate group sues over flags on license plates was last modified: May 20th, 2021 by TBE Staff

Geez, based on these comments, I expect the authors — when the time comes, as it certainly shall — to help out with disinterring the remains in Confederate cemeteries, smashing the tombstones, and throwing anything else in the trash.

This is not a close call. The SCV has to do what it thinks it has to do, but McAuliffe’s action was carefully done so as not to exceed his authority (by focusing on the logo alone). In fact, if you look at the statute about this plate, Va Code 46.2-746.22, it says no logo, so McAuliffe is doing exactly what the General Assembly wanted.

I think they should continue offering the Confederate plates. Why ponder if someone is a racist. Let them self label by displaying their true colors.