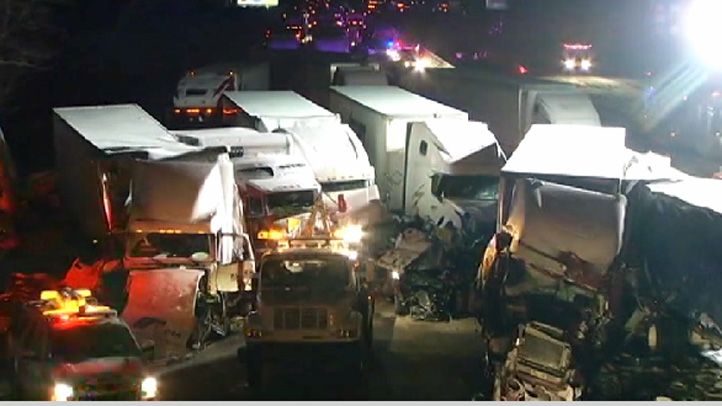 Every now and then you’ll see a news report on a hundred car pileup in a snow or ice storm, or in dense fog. The videos will show the interstate littered with crushed cars and trucks. Further back in the pileup you will notice that the succeeding wrecks grow worse as the collisions compound, to the point that the vehicles are unrecognizable.

That’s an apt word-picture of what is happening in Washington, D.C. this week, as the “people’s government” votes on a staggeringly expensive, expansive, dangerous, liberty-crippling $1.1 Trillion dollar omnibus budget that runs over 2,000 printed pages.

Once again, most members of Congress, much less the citizens, have no idea what is buried in this garbage bin. What little we know is bad enough.

Washington, with this monstrosity, further detaches itself from those whom they presume to serve. It is another victory for the “ruling class,” barricaded behind the granite walls of our administrative state, the marble halls of the Capitol building, and sparkling white sandstone of the White House.

Elections come and go; the ruling class, evidently, is forever.

Some of the best reporting on shameless capitulation to the radical leftist President comes from Breitbart’s Steven Bannon and Julia Hahn; Conservative Review’s Daniel Horowitz ; and Senator Jeff Sessions, R-Al, who has done so much heavy lifting for conservatives.

Here is the budget in a nutshell: Spending and deficits; way, way up. Give-a-ways; huge increases. Cronyism; sky-high. Funding the destruction of human life at Planned Parenthood; intact. Vast new resources for regulations without oversight; check. Waste, fraud and abuse; at record levels. Massive new immigration and refugee funding; through the roof.

Concern for hard working Americans, their families, the economy and the nation’s safety? Way, way down.

Two areas deserve more attention, and hopefully the present slate of Presidential candidates – not to mention current members of Congress – can explain their views to the American people.

This bill massively increases H2B “low skilled” visas, such as those for construction, hotel staff, maintenance, big chicken processors and amusement park personnel coming into the U.S. for “temporary” jobs, as examples. (And they can also bring spouses and children. Many, probably most, of these visa holders will be eligible for government assistance including Food Stamps.)

The tragedy is that both the Latino and African-American communities have near record levels of unemployment in the 25 years of age and under category; almost 20% in the black community alone. In addition, wages are already depressed or still falling in many of the low-skilled employment fields.

[Equally alarming is the Trans-Pacific Partnership (TPP) – the so-called free trade agreement – is still lurking in the background for Congressional approval. This omnibus budgets arrival signals strongly that this Congress under its hapless Republican leadership will be more than willing to cram TPP through. TPP is a poison pill for the U.S. economy, and its provisions will open far more unrestricted immigration competing directly for American employment.]

How could anyone in good conscience vote for a bill that further harms existing American citizens?

This omnibus bill also give the President’s refugee and immigration policies a green light, as if he need encouragement. Now we will face a new serge of immigration, primarily from third world and Muslim countries, where reliable vetting is virtually non-existent, as we have sadly learned recently.

At a time when many Americans are calling for a “time out” or moratorium on any new immigration at all, the Congress’ enchantment with wide open borders is baffling news.

The omnibus bill allocates $1.7 billion for new refugees coming into the U.S., about which Senator Sessions noted; ”This will ensure that at least 170,000 green card, refugee and asylum approvals are issued to migrants from Muslim countries [all of whom will be welfare eligible] over just the next 12 months.”

The leadership in Congress have delighted themselves with putting together yet another omnibus budget deal – the process itself a scab on democracy. But it is product of a Congress that is basically at war with the citizens of the country. What other conclusion can you come to?

These are men and women consumed, not with an old fashioned notion of duty, honor, and sacrifice for the Republic, but with a sense of self-entitlement and a certainty that they have been called to rule over the little people.

They are in a “long march” to deliberately and methodically turn the Republic into a top-down autocracy – and, of course, they’ll run it. They leave the distinct impression that they loathe us. Of late, they even fear us.

Where does the Virginia delegation stand on this budget? In NoVA, where does its only representative, Barbara Comstock stand; with the Congressional leadership and Obama, or the people.