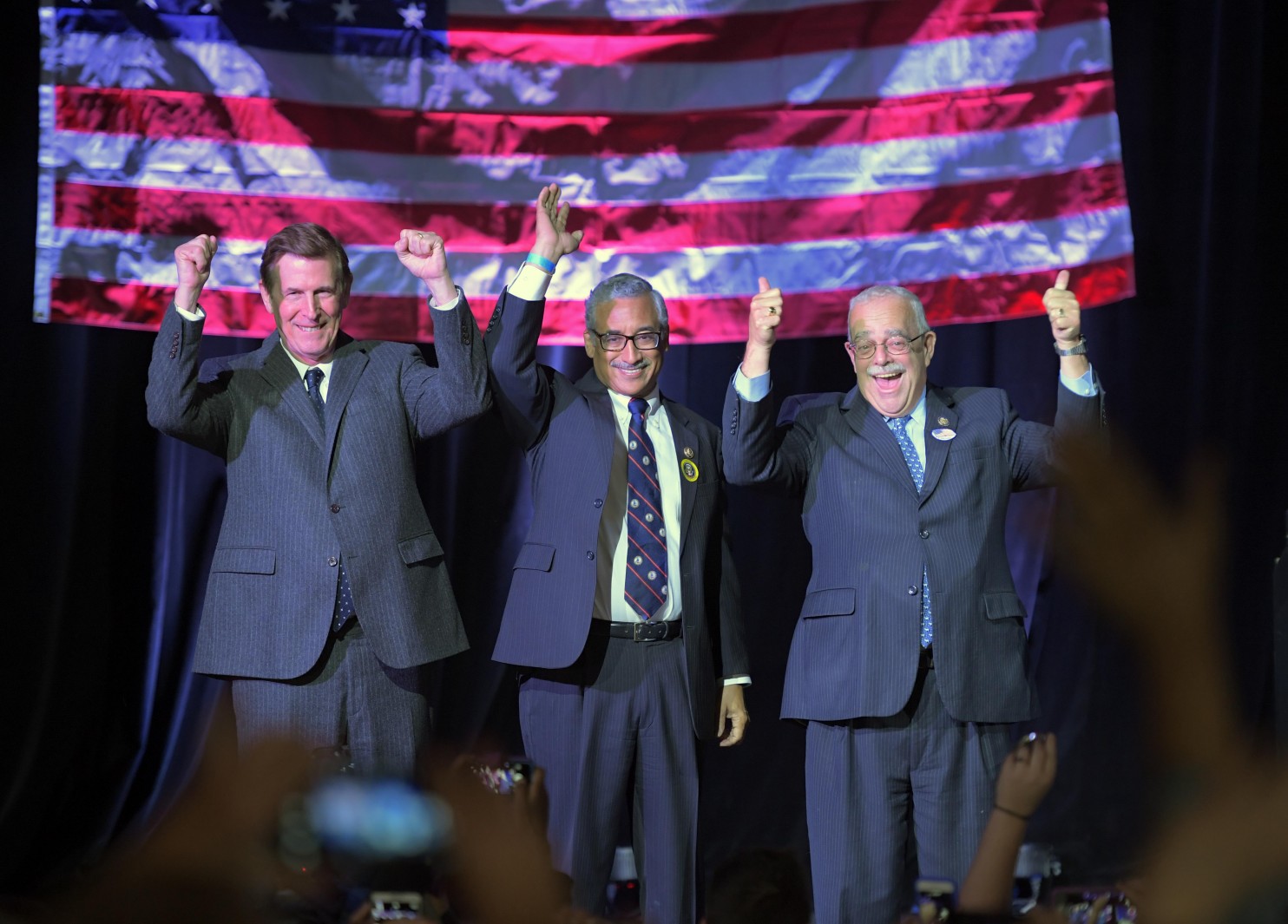 Most of the elected Democrats in Virginia have endorsed Ralph Northam for Governor, all but Congressman Gerry Connolly in the 11th district. Both of Virginia’s Senators, Mark Warner and Tim Kaine, as well as Congressmen Bobby Scott, Donald McEachin, and Don Beyer have all endorsed Ralph Northam. He also has the support of Governor McAuliffe and Attorney General Mark Herring.

Connolly will not endorse Northam in deference to former Congressman Tom Perriello who recently entered the race for Governor.Â

â€œTom Perriello and I were colleagues in Congress and remain friends to this day,â€ Connolly said in a statement. â€œWhile I continue to believe that Ralph Northam is a great leader and fighter for progressive values, I welcome Tomâ€™s entrance to the race and believe both candidates have much to gain from a vigorous contest.â€

Then Congressman Tom Perriello,
was performing “town hall” meetings discussing new health care with constituents.
A fellow Building Contractor/employer was given 15 minutes to discuss illegal aliens working as unlicensed contractors in the 5th. A wealth of data was given to him (one term Tom) personally.
He told the contractor that he would get back with him in a couple of weeks , he NEVER did.
He displayed a clear lack of knowledge of this issue back then when he was Congressman.

How is he knowledgeable enough to be Governor of Virginia today?

Ralph Northam to my knowledge is the only candidate Republican or Democrat with the intellectual capacity to combat this issue for what it is ; illegal employment, public safety risk, national security risk, Payroll Fraud !

What’s he done on it so far?

McAuliffe keeps his cards (the findings within the employee misclassification task force very close to the vest).
There is good movement in there.Through the piers I have within the residential construction industry theu feel the heat a little bit, only a little.

All of us should ask our State Senators and Delegates this;

1 How many of the violations issued by The Dept of Labor and Industry ( DOLI/VOSHA) to Licensed Contractors had VA. Employment Commission Accounts?

2 How many issued to Unlicensed Contractors also had VEC accounts?

3 What was the number of employees on site when violation was issued?

4 How many unlicensed contractors has the VEC detected in their Audits required by the law.

5 How many of the unlicensed contractors detected by VEC have VEC accounts ?

6 How many of these unlicensed contractors without VEC accounts were charged with 60.2-627

Let you Rep know that you do not support illegal employment of anyone !

SLAVE DAYS SHOULD BE DEAD IN AMERICA , this form of ineptitude in enforcing the law is not a free market.

These are enforcement and executive questions — Northam has been in there for several years now, a past legislator, and he’s done nothing on your issues other than persuade you that he cares.

Take a page from Congressman Brats handbook. He had called out Cantor on the steps of VAs Capitol.

Trump could have done the same thing to our Governor and would have won Va. never to do another campaign stop here again.

Do any Republican Gubernatorial candidates have the knowledge or testicular fortitude to follow suit ?

Based on previously and currently submitted legislation by Republicans in VA. It appears they lack the intelligence by these bills;

In my professional opinion as a licensed residential building contractor and employer of 30 plus years in the Commonwealth have to be the mpst counterproductive bills to ending illegal employment.

In the words of Forest Gump ;
“Stupid is as Stupid does”

Yes these seem to be less than stellar examples of GOP legislation but your guy Northam has been in there and has done what about the executive enforcement you mentioned earlier? I’m not tracking the ‘Northam Good, GOP bad’ logic here.

It’s darn sure an issue that all Candidates in Va.
AG , LG and Governor
should be in the know about or it is a display of no concern or lack of knowledge of the issue.

For Republicans that bring up immigration , jobs or broadening the base , how the heck will they ever do that much less standing on the sidelines to allow Va. to undermine the President Trump Administration.
More over how does any State Republican utter one single word of Santuary Cities when on the other side of the same hand they are complicit to this.

OH I would love to ask ALL candidates questions on this .
They would fire their understaff or at least send their heads spinning.

Something is up and it is more than Virginia jobs with the existence of HB253 .
I can’t believe Leesburg Tea Party hasn’t called out Delegate Minchew on the Government expansions and lack of employer accountability in this.

Va. Office of Attorney General is part of this ( he wants reelection ) , Oct. 2015 he had issued his office wanted all information on unlicensed contractors , why? ( not asking you ) something is up.

In Va. there are Licensed Contractors that don’t know how to build

and there are Licensed Lawyers who are elected to represent who may not know the law ?

To be so hush hush , It is definitely the work of the Devil.

Connelly is a traitor to his country and the people of his home state and district anyway. His endorsement is like a kiss of death or Hamas friendly hug. I wish I could convince a real patriot to run and defeat him over the next to years. Someone like my brother retired U.S. Army Col. A. Kent Schweikert would make an excellent choice if he could be persuaded to run. But then again, to Connelly of course, military service does not qualify someone for public service. So who are all his fellow tories in this Congressional district that keep electing this man to office instead?